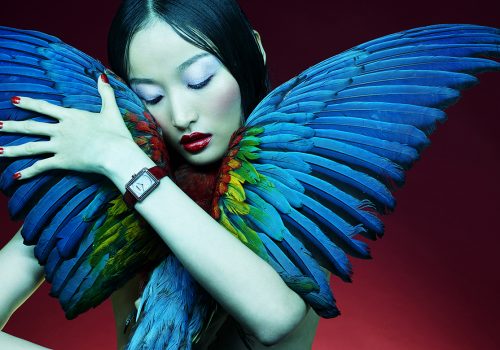 The British born John Rankin Waddell (*1966) is one of the most renowned and celebrated contemporary fashion and portrait photographers worldwide, besides a successful career in magazines running AnOther, AnOther Man, and the digital platform Hunger, and as a director of music videos, commercials, and narrative films.

With an approach that is fresh, edgy, and one-of-a-kind, he has created an impressive portfolio of the who’s who of celebrities, actors, models, and influencers. Unexpected perspectives and even disguises along with classic portraiture compositions have become his trademark over his many years in the business.

His current exhibition “RANKIN. From Portraiture to Fashion”, on view at 29 Arts in Progress gallery in Milan, allows the iconic photographer to experiment with one of his most complex gallery productions to date. Taking place across four months, it will present a rotating exhibition of his work, celebrating the Fashion Film Festival (November) and Women’s Fashion Week (February 2020).

The main appeal was to “really become part of the cultural fabric of a city”, Rankin explained before the opening of the show.

In-between changing parts of his exhibition, we got a chance to speak with Rankin about his monumental archival show, his love for magazines, his thoughts on selfies, and what’s new in his world.

Nadine Dinter:
From Portraiture to Fashion” is reported to be the most comprehensive show in Milan so far. What were the challenges and how did everything come about?

Rankin Waddell: Every exhibition has its own set of challenges, particularly when they’re happening internationally like this one. Covering three different strains in my photography – fashion, art, portraiture – it is 100% the most comprehensive show I’ve done in Milan. 29 Arts in Progress have only ever exhibited my work at Photo London previously, so it’s been a learning experience for both of us. We started working them thanks to a great friend of mine, Barbara Silbe, who introduced my team to the gallery, they met up in London and we started working together from there. They’ve been really great, we came up with a difficult concept which is particularly logistically hard, as the works change over time. But they where really amenable to our ideas and they worked closely with my team to curate a strong show.

Can there be portraiture without a sense for fashion, or fashion photography without the sense of a good portrait? How do you separate those two genres in your own body of work?

RW: I wouldn’t say there is any real difference in my style between how I shoot portraiture or fashion. I find fashion interesting but I think people are always more engaging than just the clothes they are wearing. Naming the show From Portraiture to Fashion is more of a play on traditional views of these types of photography, we designed it so you could buy something from the first, second and third rotation and they would all sit with each other. There is a conversation between each category but aligning them all is my sense of authenticity in the model. I always want to connect with models, I talk a lot on set, we all joke around and have fun – I want the person to shine through regardless of the artifice of the image.

Is having a show in Milan a bigger challenge because this city breathes and lives fashion to the fullest and is home to all the big fashion houses, vs. having a show in Berlin, which is known to be more experimental, edgy,  and unconventional? What’s your curatorial take on both cities?

RW: I love both Milan and Berlin, but yeah, they are VERY different cities. In Milan we’ve been really fashion and art focused. It’s a city that is know for it’s style and we really wanted to reflect that in the show; it’s clean, but smart and interesting. We also couldn’t resist putting in an amazing picture of Monica Bellucci, I once described her as “The Queen of Italy” and I really stand by that. Similarly, I don’t think I could do a show in Germany without an image of their Queen: Heidi Klum. In Berlin I tend to show things which are a bit more experimental and a bit darker. Whilst it’s still a fashionable place there is a grungier element in Berlin which is fun.

Your work is mostly in color, but you also have many very strong black-and-white images. Do you perceive color photography as being more modern and part of the digital age, and black-and-white as having a more classical feel, as reminiscent of former, analogue times?

RW: I actually love black and white images. I shoot a lot of portraits in black and white all of the time and in my magazine, HUNGER, we always have a few editorials that aren’t in colour. I think it does feel a bit more classical, but if you use it right it shouldn’t feel historical. Actually the fun thing about the digital age is how much everyone wants to make their images look historical. There is an app where you take photos that mirror grainy film images, and you can put on a filter on your iPhone images that makes your photos look like Polaroids – complete with processing errors.

In Germany, many people were introduced to your work through your participation in Heidi Klum’s “Germany´s Next Top-Model”. Is she still your favorite model and what do you appreciate most about her?

RW: Heidi is one of my favorite people. We’ve been working together for years and have even made two books together. On set we are always having fun, but at the same time she is so professional and you always know the images are going to come our great.

What’s your opinion on the first generation of super models, such as Turlington, Schiffer, Campbell etc., vs. today’s top models, like the Hadid Sisters, Kendell Jenner, etc.?

RW: Kate Moss made a really interesting point in my book Unfashionable, we where talking about selfies and she said, “You would never do that in our day”. And that’s so true! The first generation would never pose in front of mirrors photographing themselves all day, but the new top models have to. It’s a different world and the sheer scale of constant visual representation needed to be a supermodel today is almost unfathomable. I’ve shot Claudia Schiffer, and I’ve shot both Gigi and Bella Hadid, and it’s a completely different experience. Social media has meant they are different types of models and so it’s very hard to compare.

Today’s selfies are both fascinating and disgusting, you once stated in an interview. Do you like ever enjoy taking selfies yourself or is this more of something done by the people you photograph?

RW: If I’m going to be honest, I do have to say, I am a little bit obsessed with filters. I love playing around with how I can change my face; anything from making myself look like a baby to a pirate or on fire. It’s great to try out characters and have fun. My wife once mentioned I was doing it a bit too much, but I like to claim I’m experimenting with the medium. I might be having a laugh but I’m also keeping up with where visual culture is moving today.

In your opinion, is it important for photographers to hype their own image or connect with the public through social media, for instance, in order to enhance the visibility of their work? Or is it “just” about the photos, which should speak for themselves, no matter who takes them?

RW: I had this discussion with make-up artist Marco Antonio in the book we just released. It was clear we both had conflicted feelings about social media; whilst it is great to reach out to people, it is just an echo chamber of ideas you already have and agree with. On top of that, it is a starving monster that never gets full. If you’re not interacting with it it sits in your pocket shouting “feed me”. You have to always be photographing and always sharing, and that is no way for creatives to work. I am a real believer in the need to be bored to have space to be inventive with your work.

Does running your own magazines and publishing activities influence how you feel about other magazines – or do you keep this strictly separate?

RW: I love magazines. Printed matter in general actually. I collect books, I buy magazines, and people send me things all the time. You can’t publish in a vacuum, you need to know what is happening in the industry, so it would be harmful to try and keep myself separate.

Who did you admire when growing up – and do you still look up to any photographers, despite your own huge success?

RW: I guess I came to photography a little late. It wasn’t part of my life growing up, but once I found it I was in love. I went to a library and went from A-Z learning about photographers. Finding everything from documentary to fashion as inspiration for my work. I still look at a lot of photography now, from up and coming artists to well established icons. In my office I have a David Bailey Rolling Stones image across the room from my desk. It’s a contact sheet from an incredible shoot and looking at it gives me that push every day to try and find my own magic on set.

Thanks so much, Rankin, for taking the time to share your latest thoughts and news with our readers!

“RANKIN. From Portraiture to Fashion” will be on view through February 24th, 2020 at 29 Arts In Progress Gallery, Via San Vittore 13, 20123 Milano, www.29artsinprogress.com