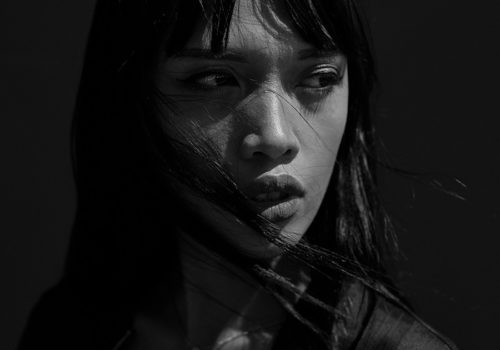 Mattia Baldi is a true cosmopolitan. Born in Italy, later working in China before settling down in Thailand, this interdisciplinary artist has a real story to tell. In 2019 he started planning his first book, which was supposed to become “a book on women” – an authentic depiction of women living in Bangkok and his own vision of womanhood at the same time. After hearing about the fascinating concept for this series, I decided to dig a little further and find out more about the project, plus, what’s new.

Nadine Dinter : Your new book Casting isn’t what people may expect from just reading the title. How did you develop the concept and how long did it take you to put it all together?

Mattia Baldi : The idea came to me a couple of years ago. I started to take shots of the models I’d worked with, on my rooftop, in bright daylight. I felt that I needed to shoot something for me, something real and far from any of the things I was doing in my commercial work. I wanted to focus on giving the model space to express herself, to catch the moment that expresses her feelings. I didn’t want to make her feel as if she was in a controlled studio environment with assistants and people around the set. My rooftop was ideal: a gray wall, lots of space, and all of Bangkok to look at from above. Sometimes we reached a few minutes of absolute silence and peace. It felt like I disappeared and she was finally free from being watched. That’s how a model casting should be.

It’s supposed to be “A Book About Women” – but seen through the eyes of a male photographer. What were the criteria by which you selected the models? Were there any requirements to join the casting session?

MB : I don’t believe that there’s a male view, and it will confuse things if we start talking about sexual orientation. There are so many kinds of sexual desires in this world that defining a way to perceive people just by their sexual gender is quite misleading. I asked all kinds of female models if they would like to do a session for this book project. They all agreed – also to come dressed simply, in their everyday clothes. I didn’t give them any directions while shooting because I wanted to catch natural, meaningful moments. I feel that fully dressed people take on the personality of the clothes they are wearing, but that also happens if they are fully naked. I wanted the models to be as if nobody was in front of them. The way you go to sleep is probably the only moment you don’t care about being watched.

All the photographs are in black and white, with strong contrasts. What was your idea behind the aesthetics? Would the concept have worked in color, too?

MB : From the very beginning, the whole idea was to focus on the hidden aspects of the subjects. Colors tend to impress by their intensity, like a scream that touches the heart. Instead, I wanted to shut out the noise and let the dance of forms take over the intellect, to awaken memories and hopes. There’s no valid symphony without unpredictable moments of silence. I wanted the silence to speak. Like a desert with silent dunes of shadow. I never wanted this to be anything relatable or pleasant, I wanted people to be shocked by the images’ everyday logic.

Flipping through the various portraits, it’s beautiful and refreshing to see that there is no one “type” of woman, but all kinds: Asian, Black, tattooed and pierced, dancers, androgynous… How did you find those women?

MB : I shot over 200 models for this series. Those who made the final selection were all selected for their uniqueness. They often have quite mixed ethnic backgrounds. I liked the idea of portraying new people, who are far from the beauty standards of the advertising world. Like a woman of Ghanian/Thai descent, or Brazilian/Moroccan/French. I’m always looking for interesting histories behind the human form. There are so many kinds of beauty in this world, so many that people have never seen. I’m lucky, since here in Bangkok there’s an incredibly inspiring melting pot of people, cultures, and religions.

For a while now, advertising and marketing have been erasing all kinds of ages, beauty filters and retouching are being used to the max, and cosmetic procedures of all sorts are commonplace. Was your book a kind of counterreaction to this development in society?

MB : I moved to Beijing in 2006 and since then I’ve been living and working in Asia. It has been a few years now that the ideals of beauty among young generations are now almost entirely defined by the digital world. It’s a global phenomenon, of course – people today look at Instagram more than they look at themselves in the mirror. We are rushing toward a reality where it’s normal to have heavy body modifications and show our physical aspects enhanced through digital filters. I think it’s important to continue to show how people actually are. Any photograph is an interpretation of reality, but I do believe in the truth through natural light.

As far as I remember, you were planning to stage and shoot another “Casting” in other cities as well. Is this still on, and if so, what’s the next city?

MB : Right now, we are fully focused on designing a Collector’s Edition of Casting. With the first edition nearly sold out with only a few copies left in the bookstores, the publisher Stefano Vigni and I were thinking of doing something special for the second edition. An extended version of Casting probably with more pages, as a hardcover, and including a fine art print looks like the direction we are heading. I trust Stefano and his view in designing something unique for this. For now, I’m not thinking about shooting a new book in another city – the current world situation is too uncertain to plan a new Casting. I have an idea that I’m discussing now about a new project to be shot here in Bangkok.

You are an Italian photographer, living in Thailand, coming from an advertising job in Beijing. What’s your story?

MB : I started with art in high school, then went to art school and got a bachelor’s degree in painting. Then I got a master’s in studio photography and moved to Asia. In Beijing I focused more on studying the culture and the particular moment in history before the Olympic Games. My last painting exhibition was in Beijing in 2010 at the Times Art Museum. Since then, I’ve focused only on photography, both commercial and independent projects.

Coming from the professional world of advertising, was there a specific tipping point when you decided to focus on your own artistic photography?

MB : I started with photography while I was still painting; the mindset was the same. So let’s say that mine wasn’t a photographer’s approach from the beginning. From middle school onward, I was dedicated to drawing and painting and the transition from that world to photography took some time. I started photography with a large format view camera because it was the only kind of photography that could match my artistic expectations. I took digital cameras seriously, later on, let’s say recently even. Around 10 years ago, advertising photography as a profession took over in my life and I started a new chapter. Today I feel that my artistic research is a meditation on my commercial work.

What has been the reaction to the book so far? Has there been feedback from friends and colleagues?

MB : It was well received, many bookstores took it immediately, also thanks to the beautiful design and exceptional print quality from Seipersei. The feedback I got from many was “looks amazing and it smells good!” and that reminded me how important it is to create something physical, tactile. I’ve always loved photography books, images that have a connection with you through sound, touch, and smell. Today we perceive photography mostly on our phone screens and it’s important to regain the pleasure of flipping through large format photographs.

What’s your advice for the next generation of photographers who are planning to work on freelance projects?

MB : Mine was an unconventional way to approach the world of photography, so I’m not sure if I can recommend doing the same. I see some new talents today acting very bold, arriving at solid results in a short time. But also, I see them quitting after the first failures or successes. My vision of photography starts from the history of art, which becomes the history of photography and advertising. I just think you have to have a passion for visual communication in all of its forms. Studying the past is the only way to know what’s been done before us, and working on the present creates the next future. It’s important to push yourself to achieve more. We are all wild pirates looking for our treasure island.

About the book: Casting – A Book About Women

Binding: Swiss style, with open spine; back protected with canvas.