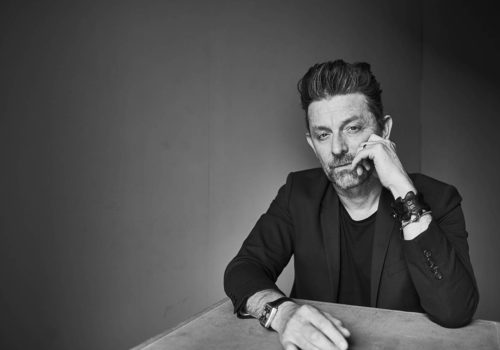 I met Anatol Kotte through a kind introduction by the jewelry designer Marjana von Berlepsch around 2015. He had just launched his new book Iconication, and we started our exchange. Since then, we have curated a show together (2017, at the former OUKAN concept store), opened his photography studio (CAPITIS Berlin, 2018), and collaborated on various other occasions. Throughout this time, Anatol has never stopped surprising me with his new projects and his impressive outreach to actors, celebrities, as well as brands and companies. I am also a massive fan of his minimalistic portraits – and had the pleasure of sitting for him twice myself. So, it was high time to sit down together and do a proper recap and discuss “what’s new?”

Nadine Dinter: Born in Western Germany, raised in Frankfurt, based in Hamburg, with stints in Mallorca, South Africa, and Berlin – would you consider yourself a German or an international photographer?

Anatol Kotte: I would consider myself German, but influenced by traveling internationally, family, and curiosity.

You are famous for shooting fast, fearing no boundaries, and have portrayed top actors, politicians, and socialites. Would you like to share some of your shooting principles with us?

AK: One of my professional rules is confidentiality – otherwise, I wouldn’t have this reputation of trust. People who work with me know I would never talk about them afterward. But after a hard day shooting with Rihanna in New York, getting a little massage on my stiff neck from her was definitely a highlight of my career 😉

Looking at the signature style of your images, we often see a minimalistic setting and the famous “Kotte Grey” as a backdrop. Were you inspired by anything in particular, such as Irving Penn’s “corner” portraits?

AK: Back when I was an assistant in Frankfurt, I worked at a famous studio run by a British guy. It was one of those huge, old lofts. We were playing billiards while processing. There were wine tastings, an in-house cook, and oldtimers in the parking lot – it was the eighties at their best. The guy had painted the whole studio in a unique gray color, inspired by a studio in New York where he had been an assistant. That’s where I first experimented with mixing gray from primary colors – it’s perfect for skin tones, and you can easily tweak it to be warmer or cooler.

In 2017, you launched a special place for photography called “Capitis” in Berlin. Could you tell us a bit about that?

AK: That location came to me by coincidence. I always wanted a second studio in Berlin – I shoot there a lot and was fed up with constantly using locations at the same ministries and hotels. This place was a former art gallery with a bar, in a side street off of Friedrichstrasse. My idea was to combine everything: a portrait studio with a gallery and a bar/restaurant. Before the Second World War, the big photo studios were in that area because of Ullstein publishers and the Berliner Zeitung, one of the first newspapers to include photographs. Besides photo shoots, Capitis hosted around 14 exhibitions over three years. There were also a lot of cultural events and parties of course! It was a unique concept and worked well until corona.

Last year, you moved back to your “home base” in Hamburg and opened a brand-new photography hub – Capitis Galerie Hamburg. Tell us about its concept and all the components it includes.

AK: Since I had to close the project in Berlin due to the pandemic, I packed up everything and brought it back to Hamburg. My friend and former assistant Olli Heinemann had a big space in the middle of Hamburg – a whole block – where he had some businesses that weren’t doing so well. I convinced him to team up with me, and we opened a shop for analogue photography film, cameras, processing, and repair. It’s called khrome_hamburg, and next to it, we reopened Capitis. This February, we will launch c.o.p. (center of photography) in the same building for workshops, lectures, and more.

Until 2 March, you are showing a stunning selection of high-end photographs from a handful of different photography collections. Can you tell us more?

AK: I did that show in Berlin, but there was nothing for sale at the time; it was about collecting photography. This time, most of the images are for sale. We have vintages from Irving Penn, Otto Steinert, Horst P. Horst, Peter Lindbergh, Norman Parkinson, and many more from four different collectors. It’s a very lively, wild mix.

Besides this exquisite show, Capitis Galerie Hamburg will undergo some major additions in the coming months. What’s new this year?

AK: We will team up with Leica for the Triennial of Photography Hamburg and show the LOBA Leica photography prize winners. Andy Summers (from the band the Police) will also have an exhibition later this year. So stay tuned and follow us on Instagram @capitisstudios.

For invitations and news about our upcoming shows and events, you can sign up for our newsletter by sending an email to: [email protected].

Looking at your Instagram @anatolkotte, we see many images taken in Africa. What was that trip about, and was it freelance or commissioned gig?

AK: My friend Lars Kraume, a well-known director, shot a film about the Herero rebellion in the early 1900s. I was in Namibia for about five weeks during that time and took both portraits and landscapes. I also conducted interviews and documented the making of the movie. It’s a fascinating story involving the cruel conditions during the German occupation and the resulting conflict in German South-West Africa. The colonial past is a very dark chapter for most European countries. But surprisingly, people know more about Nazi Germany than the first genocide of the Herero and Nama. Sadly, the first concentration camps were back then as well. I hope that many more people will learn about this part of history from the film – that’s what happened to me. It would be my dream to do a photo book to coincide with the film’s release.

One of my favorite series you shot is of the fashionable and extravagant entertainer and runway coach Jorge González in Cuba and with Leica. What was it like working with him, and what is your affiliation with the Leica brand?

AK: As always, things come unexpectedly. To test and promote the Leica CL, I decided to follow Jorge for 24 hours – to see if the camera is suitable in all light situations – from dusk till dawn. After we were done, at 4 am, sitting in a hotel bar in Cologne, Jorge asked me if I wanted to shoot all of his stage costumes. They are beautifully designed by the Cuban couturier José Benedin. So we flew to Havana with over 30 dresses, and I staged him in several locations. It was a fantastic project, and the results were more than satisfying. I shot the whole story with the incredible Leica S.

Jorge is such a special person with a storybook vita. Being gay in communist Cuba, studying nuclear economy in Bratislava, streetcasted for Coca-Cola in Prague… he fled university, started working for Versace in Germany, then became Heidi Klum’s sidekick in Germany’s Next Top Model. Now he’s acting, hosting the show Let’s Dance, is a role model to many, and a spokesperson for major brands. What a flight!

What is your advice for the next generation of photographers?

MT: When my schedule isn’t so packed, I maneuver myself into situations where I have to develop ideas instantly. I ask or book around 10 people, hire a location, and start taking portraits without preparing ahead of time. It’s like practice for an emergency. Often I have very little time with my subjects, and I don’t want to get rusty 😉 But the most important advice for young guns is to stay curious – if you start getting too much into a routine, you should change your camera format, for example.