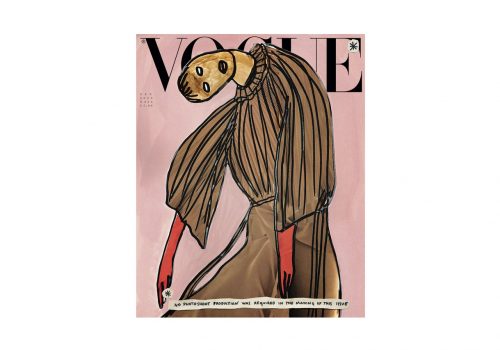 It is the most stupid text of this beginning of the year, the triumph of the most radical and most politically correct.

It is signed; Emanuele Farneti, the editor-in-chief of Vogue Italia. This is the editorial of The January 2020 issue of the magazine.

We seriously miss you Franca!*

No photoshoot production was required in the making of this issue

“One hundred and fifty people involved. About twenty flights and a dozen or so train journeys. Forty cars on standby. Sixty international deliveries. Lights switched on for at least ten hours non-stop, partly powered by gasoline-fuelled generators. Food waste from the catering services. Plastic to wrap the garments. Electricity to recharge phones, cameras…

In the global debate on sustainability, and the values that Vogue has pledged to promote over the next decade (signed by the editors-in-chief of the 26 worldwide editions), there is one aspect that is particularly dear to me: intellectual honesty. In our case, this means admitting that there is a significant environmental impact associated with publishing a fashion magazine. The statistics above are a rounded-down estimate of what went into producing the eight stories that composed the latest September issue. Change is difficult, but how can we ask others to change if we are not prepared to call ourselves into question? Accordingly, this month we wanted to send a message: that creativity – which has been the cornerstone of Vogue for nearly 130 years – can, and must, prompt us to explore different paths.

All of the covers, as well as the features on the following pages, have been conceived by artists who have created without travelling, shipping clothes or polluting in any way. These are fashion stories in the true sense of the term: the artists were assisted by stylists, and they have portrayed the faces of real women. But the challenge was to prove that, as an exception, it is possible to show clothes without photographing them. It’s a first: Vogue Italia has never had an illustrated cover, and, as far as I know, since the existence of photography no Vogue has ever printed an issue without including this medium.

Eight artists – both well-known and emerging art icons and comic book legends – have put themselves to the test. Furthermore, thanks to their generosity, the money saved in the production of this issue will go towards financing a project that really deserves it. There’s a place in Venice that stays open at night for students when the rest of the city switches off its lights. Called Fondazione Querini Stampalia, it is a place of art, silence and shelter that was severely damaged by the city’s flood last November. We will be donating the saved funds to the restoration of this foundation, because although the magazine will return to its normal production routine tomorrow, it’s nice to think that something will remain of this issue: a small but concrete gesture. Condé Nast Italia has also made an equally tangible investment, because from today it has decided to use only compostable plastic to wrap the magazine: a substantial but necessary added cost.

On these pages, we speak of clothes that only exist in the digital world, garments that are reborn from offcuts, and items that pass from one person to another. We see how even the beauty sector is now making forays into the second hand world. We discuss the cathartic power of failure, how fashion can help to describe migrations, gender and identity. And we find out how difficult it is sometimes to answer the simple question: who are you? The only photo feature this month is here because it was shot by two 17-year-old photographers. They are the eyes of tomorrow on loan to our present.

Above all, there are voices that are not our own, because there’s no value without a dissenting opinion. We therefore decided that it was time to ask ourselves some uncomfortable questions, two in particular: can fashion, with its obsessive need for novelty and its fetish with possession, aspire to be genuinely sustainable? And is the search for diversity – which is much needed and never enough – about sincerity or tactics? The two people who offered an answer to these questions – Naomi Klein and Lea T. – haven’t made any concessions. And this, in my view, is priceless.”

*Note: Franca Sozzani was the legendary director of Vogue Italia for more than 20 years.