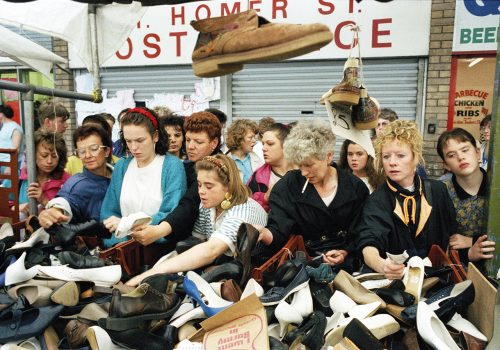 There is something jarring about having Martin Parr select the photographs in Tom Wood 101 Pictures. It is not so much his patronising words (‘he is Irish and let’s face it we all love the Irish’) but the memory of his own photographs in his Signs of the Times (1992): staged scenes showing people in their homes and items of their domestic décor. The accompanying quotations make clear the book’s intent to ridicule ordinary people and expose what the photographer sees as laughable examples of uncultured taste and pretensions.

The best thing that can be said about Parr’s work is that he is a documentarist but such a methodology is alien to Wood. He is close to the people he photographs because, while he does not know them personally, he is of them. For a long time, Liverpool was the port of choice for Irish and other emigrants and Wood himself came to Merseyside from Ireland in the late 1970s, staying for quarter of a century. His familiarity with the place and its proletarian heritage provides the essential context for his practice as a photographer of the street. He takes pictures of what interests him, rejecting the idea of working to an agenda: ‘I go out and take the pictures and you figure out what they mean afterward when the project’s finished. The camera is asking questions. You put it all together and you see what it adds up to. Whenever I’ve gone out with something specific in mind, it never works for me.’ His practice generates a style of photography that emerges immanently from his way of working. It becomes what it is.

Wood’s intuitive approach has yielded a distinctive body of work that has gradually garnered the attention and respect it has always deserved. His pictures are empty of irony but full of tenderness and they exist in symbiosis with a raw directness as his camera, with a fidelity to working-class life, roves like a Geiger counter registering authenticity and moments of immediacy.

In his non-landscape photography, it is people that take priority for Wood. His eye for anonymous faces reveals an empathy that does not reduce them to ciphers of a ready-made sociology or snapshots of quirky personalities. His photos of as-it-happens moments of ordinary life – shopping in a street market, congregating in a social milieu – communicate to the viewer the pulse of felt realities, the personal significance that individuals bring to concrete situations.

Consumer etiquette in shopping centres requests an impersonal mask of sedate browsing but the street market on Liverpool’s Great Homer St was altogether different (it closed in 2005). Wood turned up there regularly on Saturday mornings, his camera-toting presence becoming familiar to shoppers and stallholders, and he warmed to the market’s informality that was part of its unique identity. Known as Paddy’s, from a time when second-hand clothes were sold there by the Irish, it was predominantly a woman’s market with children brought in tow. Wood captured the market’s personality as well as its economic character. In the 1990 photo in 101 Pictures, the women are not affluent and the shoes – old stock or factory seconds – need checking before hard-earned cash is handed over; juggling tight budgets, they cannot afford mistakes. (More of these superb photos can be seen in Stanley Barker’s publication, Women’s Market.)

Wood’s ability to compress meaning into a single image is equally well demonstrated in the photos he took at the Chelsea Reach night-spot (1983) in the sea resort of New Brighton, a ferry ride across the Mersey from Liverpool (published in 1989 as Looking for Love). As with the street market, he was a regular visitor and his presence there was often taken for granted. In his picture of coiffured young women at the venue’s entrance, the fragility of the self is disarmingly conveyed in intent faces and assiduously prepared appearances.

Angst lurks within the performative aspect of selfhood and this is also on show in the picture facing the title page of 101 Pictures, ‘Gangolads, Anfield’ (1992). The nonchalance of the younger lads is qualified by whatever the other three of them are looking at down the road. Like the girls in the nightclub, they have a part to play and a role to maintain.

The consistent strength to be found in Wood’s work comes from conscientiously seeing working-class people in their own right, granting them unconditional respect. This goes beyond role play. Whether posing for a photo, or just sitting on a bus, they are who they are and the camera pointing at them is not looking for anything, trying to be clever or making a point.

In a photo of people on a street corner (1989), the composition’s strength comes from the stillness in its frame, a set from a silent theatre. Only three of the dozen figures are moving, the rest are waiting and looking, as inert as the mattresses in the van or the unstocked empty fish van. The picture’s quality comes from its unstaged enactment of pensiveness, a contingent configuration of bodies, buildings and things in one place, one time. The camera, as Wood says, is asking questions – but there are no answers.