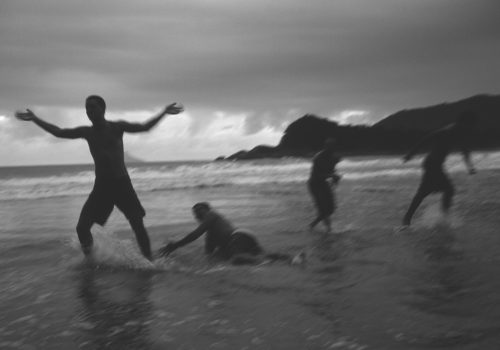 Philippe Moisan is not a man who likes the easy way out, and his career path does not look like a long, quiet river. He is not interested in what is conventional and ready-made. Instead he prefers to mix influences, play with memories or take off to other horizons.

When he discovered photography, it imposed itself to him as an obvious vector in this quest for the world. His grandfathers were his first influences. One was a painter and political cartoonist at the Canard enchainé and the other a peasant poet. Both free thinkers, they passed on to him the love and respect of art.

With such a heritage, strong compositions became as natural as breathing.

In 1983, he entered the Ecole du Louvre to study with the Egyptologist Christiane Desroches-Noblecourt, as well as with Pierre Amiet, curator of the Guimet Museum and specialist in Far Eastern art. Then, he took courses at the SPEOS school, photography section.

But these years were also those of the very popular Parisian parties at the Palace and the Bains Douches. Or again, the time of his first trip to New York. Inspired by the asphalt, the urban verticals, the curves of the Guggenheim, he returned there often.

In 1984, during the Cold War, Philippe Moisan spent a year in Berlin as part of his military duties. There, he went to museum, such as the Berlin Dahlem museums, or went to hear Karajan at the Philharmonic, the romantic opera in ex-East Berlin, sheltered from an icy winter.

The winter crossings of the German countryside and forests by train were a powerful visual marker for his future photographs. Sensations that the photographer later found in the work of the painter Caspar David Friedrich on nature.

In 1987, Philippe started working for a major French airline. From then on, he never stopped traveling around the world. It is there, that he began photography. From then on, his life was divided between the smell of kerosene and the sound of his camera’s shutter release. The adventure lasted more than 20 years. He travelled all over the world. This freedom of movement strongly influenced his research and his visual discoveries.

Between 1998 and 2000, he spent a lot of time in Miami, in the new tasty district of “Little Cuba”. This was the time when he learned the codes of light in studio and on location, through collaborations with fashion magazines.

Passionate also about what happened after the shooting, he trained in depth in the technique of black and white silver prints with Georges Fevre, known as the magician, who was the silver printer of the greatest photographers of the years 1920-2000.

While continuing to work for fashion and advertising agencies he decided to take a turn and devote more and more time to roamings and photographic wanderings at random.

First immersed in the architectural verticality of Sao Paulo, Philippe began a long series of portraits of amazing characters who haunt the streets and nights of this sprawling megalopolis.

Later, in the spirit of the romantic travelers of the nineteenth century, he travelled for twelve years, without any real goal or purpose, to a great number of very different countries. Occasionally working for the press, he discovered Buenos Aires and the Argentinian desert of Ischingualasto, Nevada and Death Valley, the young cities planted in the sand of the Arabian Peninsula, the Zen temples hidden by immense trees around Koyasan and Kyoto in Japan, the Embera Indians of Panama, the dazzling aesthetic and graphic totalities of Hong Kong, New York, Shanghai, Bangkok and so many others…

Since 2014 he lives in Bangkok, a new megalopolis of contrasts, a city in constant acceleration. He works there in duo with the Thai visual artist Rush Gaspard Pleansuk. Together, they developed an artistic collaboration on the theme of trees and forests.

For the past few years, Philippe has been working mainly on a phenomenon that is deeply rooted in Japanese culture, the “Shirinyoku”. It is the sensation that one experiences when the light rains down between the trees and the foliage to oneself. For this project, he travels through the forests of Europe and Asia in preparation for a book and several exhibitions.

His secret : forget everything to let the naturalness express itself once the mastery of the photographic technique is integrated. Philippe Moisan likes to work with film, especially with a Fuji 6×9, and he takes only one image, only one, but it is carefully thought out and composed. With him, no frenzy of the shutter release, his work is too meticulous for that.

Inspired by the cinema, he often opts for the American shot when it comes to staging his main character

When he approaches the landscape, the construction of the image is done with the same care, framing, light angle are thought in the smallest details, transforming the banality into a real work of art. But make no mistake, this search for a certain perfection does not exclude spontaneity or even humor. His images are poetic and full of freedom without ever distorting reality.

Philippe Moisan : The day I put my eye behind my father’s Nikormat around my tenth year. I saw something unreal. It was at the edge of the Mediterranean and I discovered the horizon as if through a periscope. And the “click” that followed!

The man of images who inspires you?
Philippe Moisan: There are three. Alexandre Rodtchenko, Sergueï Eisenstein, and Paul Strand.

The picture you would have liked to make ?

Philippe Moisan : Buzz Aldrin on the moon photographed by Neil Armstrong in 1969. All the symbols are there. The portrait, the landscape, the scientific photo, the historical photo, the exploration, the steps of the man, the color, and even the self-portrait of Armstrong in the visor of the helmet.

Philippe Moisan: “The vanishing race” Navaho by Edward S. Curtis. The mystery and the narrative power that emerges from these Indians on their horses going on a road with the last ray of sunlight is a magnificent tale.

And the one that made you angry?
Philippe Moisan: In general, all the selfies. It’s more dismay than anger!

What is the quality needed to be a good photographer?

The secret of the perfect image, if it exists?
Philippe Moisan : The one that would immediately and irrevocably change the course of history. The perfect image has a very strong power of revelation for the buried memory. I think that it must reactivate a major unconscious element, whether it be artistic, political or spiritual.

Philippe Moisan: Having managed to take a nude portrait of a fireman in my bathtub in Sao Paulo when he came to my building for an emergency.

Philippe Moisan: Not being aware of my photographic passion when I spent a year in the army in Berlin in 1984. I wandered around the city, passing checkpoint Charlie regularly; not to mention my nightly walks along the wall in winter. In retrospect this year could have been major.

Philippe Moisan: I would ask him to pose for me, while dreading that he would offer me a selfie.

Philippe Moisan: An image by John Moore, awarded by the World Press in 2019, where a little Honduran girl cries as her mother is searched by a security guard before they are taken into custody and separated. The surveillance and incarceration of ideas that unfortunately follow their paths.