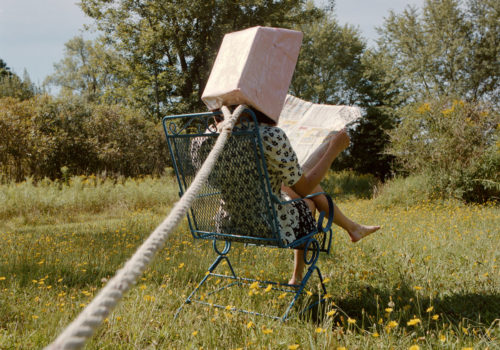 Modern images with a touch of nostalgia

Originally from a small town in upstate New York, Alex Hass has had a passion for the arts – from photography to music production from a young age. Growing up in a rural environment, his work is often related to naturalistic themes and motifs. He moved to New York City in 2013 to further his education. He graduated from NYU’s Tisch School of the Arts in 2017 with a degree in film and television. Since then, he has been working in New York City as a freelance cinematographer and photographer, shooting a variety of projects ranging from narrative, portraiture, documentary, commercials and music videos. When not working on assignments or new ideas, he travels the world in search of a great cup of coffee. But for now, he’s been working on our “Questionnaire”.

Alex Hass: It’s hard to remember my first ever photographic click, but I do remember experimenting with a point and shoot camera when I was about 12 years old. There was something so intriguing to me about looking through the viewfinder and changing focus, angles, and exposure. It was a new perspective and way of looking at the world.

Alex Hass: Elliott Erwitt has been a big inspiration for me lately. His work encapsulates brilliant street-style candid photography in a way that feels naturalistic yet beautifully composed. His images focus on human faces often interacting with an urban environment. They are rich with texture, emotion, and cinematic contrast.

The image you wish you had made?

Alex Hass: “The Benevolent Voyeur” is an image created by Elliott Erwitt that I continuously come back to for inspiration. It is simplistic in its approach and beautifully framed to give the viewer a glimpse into an intimate moment shared by a loving couple. The sun sets softly in the background as a couple’s embrace fills the driver’s side mirror. The use of reflections both in the mirror and in the water create a sense of depth and intrigue while maintaining that strong minimalist sensibility.

Alex Hass: Untitled (Beer Dreams), from Twilight by Gregory Crewdson
I first saw this image in a book that my roommate had and it captivated me unlike any other photograph. It has cinematic beauty and a sense of loneliness that is so alluring. Crewdson’s use of light to highlight portions of the image is masterful. His images feel like still frames from films and gives me great inspiration when lighting for film.

Alex Hass: Patience. We as the audience only ever see the image that the photographer was lucky enough to capture. What we don’t see are the countless missed opportunities, out of focus shots, or blurry images. The longer you wait, the more chances you’ll have at capturing something beautiful.

Alex Hass: In my opinion, there’s no such thing as a perfect image. Photography is inherently subjective and cannot be categorized or ranked. Of course the audience will respond well to certain compositional techniques or dynamic lighting, but, to me, striving for perfection in an image is futile.

Alex Hass: I first started using a small point and shoot digital camera when I was about 12 years old. It was cheap and shot very low resolution, but it was a great tool for learning the basics of composition, exposure, and balance of color in an image. At the end of the day, the type of camera isn’t what matters, but the photographer behind the lens.

Alex Hass: Today I shoot mostly film using Nikon SLRs or a medium format Hasselblad 500CM. For me, film creates a nostalgic and organic tone that is really difficult to achieve digitally without a lot of post-processing. The process of shooting film creates a sense of adventure. Not being able to immediately review all of your images establishes a trust between the photographer and the subject.

Alex Hass: Caffeine. I am most productive in the morning and coffee pairs very well with creative projects and photoshoots. There’s something so romantic about coffee and sharing it with a friend or lover.

Alex Hass: I think my greatest quality is preparedness. I always try to plan ahead and anticipate any obstacles or challenges before they happen. Coming from a background in film production, this has become an invaluable skill set. Louis Pasteur once said, “Chance favors the prepared mind”, and I think that applies to all professions, but especially photography.

The job you wouldn’t have liked to do?

Alex Hass: Many of my friends work conventional office jobs where there is not much variety in their day. They go to the same office, work with the same people, and essentially perform the same tasks daily. I am too restless for this kind of work. I much prefer working on a variety of projects in different parts of the world, meeting new people, and creating unique and exciting work.

Alex Hass: I find myself perusing eBay constantly looking at vintage lenses and cameras. Used cameras are exciting because they tell a story. They have captured life from a different time and place and that can be hugely inspiring. My single biggest extravagance from eBay was probably my most recent camera purchase, a Nikon DSLR from Japan.

Alex Hass: My biggest regret is waiting so long to shoot on film. I only started really delving into analog three years ago and the results can be so inspiring. I can only imagine if I had brought a film camera with me on my travels to France, Norway, or Jamaica what kind of images I would have produced. However regrets are fleeting and there’s always something to learn from them. I now carry a film camera with me on every trip, near and far.

Alex Hass: Instagram is my favorite social media outlet. It’s a great space for artists and creatives of all kinds to share their work, meet new artists, and draw countless inspiration.

Alex Hass: Color. For me, photographs are all about creating or recreating memories from our past and I think those images become more vivid when they are in color. That’s not to say that black and white isn’t a beautiful format but certain colors can evoke such a visceral response that I think it can be much more powerful if used with intent.

Alex Hass: I always try to take a naturalistic approach to my lighting. Even if I’m using entirely artificial lighting, my goal is usually to emulate what naturally exists in the world. It tends to draw the audience in without distracting them or taking them out of the context of a photograph.

Alex Hass: I would ask God to pose for me. Ideally in the driver’s seat of a 1964 Cadillac with sunglasses on. Many people see Him as this distant, otherworldly figure but I would like to create a more human representation of the man so many people worship.