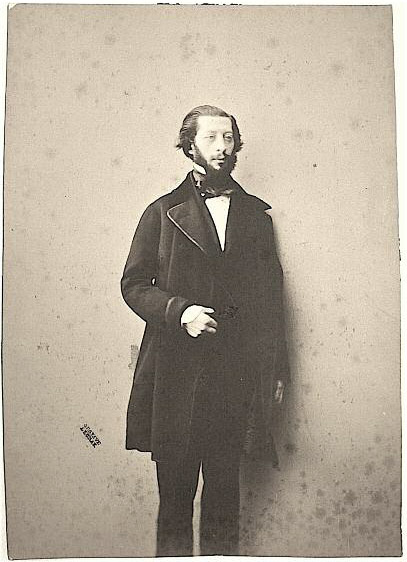 Examination of a Le Gray Picture from the Sirot collection

Georges Sirot is an important name for photography collectors and Un siècle de vision nouvelle is a very early exhibition catalogue (organized by Jean Adhémar of the BNF, 1955). A.J. are the initials of André Jammes. Sirot, Adhémar, Jammes, three names which are three good reasons to examine more precisely the rather modest photographic portrait.

One exclusive disproving or supporting evidence would be enough to conclude the examination. But such decisive evidence are not common in the field of early photography.

We could prove the provenance and interview André Jammes about the portrait, its identification in pencil by Sirot, and its presence in the 1955 exhibition, so we can accept that Sirot, Adhémar and Jammes considered the portrait as being a self portrait of Le Gray.

We could also trace precisely its provenance and verify it was never presented to the public since 1955 nor ever reproduced.

Nevertheless, this young man looks quite different from the best known portraits of Le Gray.

Our method was to look for all known portraits of Gustave Le Gray on paper and then to list the points to check and propose as disproving/supporting evidences :
— The eyes
— The eyebrows
— The ears
— The hair and haircut
— The cloths
— The silhouette

We found one oil painting, thirteen photographic portraits (1-13), and two less precise silhouettes on paper (14-15), they are presented in chronological order from the different adresses of Gustave Le Gray.

We also listed all friends and students of Gustave Le Gray, searching if one of them could match the model better than GLG .

• 1847: ARRIVAL IN PARIS
Gustave Le Gray returns from Rome with his Italian wife Palmyra and two baby girls Eulalie (born 4 June 1845) and Myriam (born 2 August 1846). The first family home in Paris is at 27, quai des Grands Augustins, then in the first months of 1849, they move to 110, rue de Richelieu, just one block away from Auguste Mestral’s appartment 48, rue Vivienne, where a group of young men experiment with photographic processes.

• 1856: HOME AT THE BARRIERE OF CLICHY AND STUDIO NEAR THE OPERA
With the financial support of Marquis de Briges, Gustave Le Gray opens an extraordinary studio in the penthouse of the new building at 35, boulevard des Capucines, which can still be seen in the distance of rue Scribe. His wife, daughter Eulalie, son Auguste (born 9 March 1851) and maybe Lodoiska (born 18 December 1853 but probably dead at infancy) remain at Barrière de Clichy, joined by baby Eugène (born 7 September 1857).

• AUTUMN 1858: 35 BOULEVARD DES CAPUCINES
Sudden death of Eulalie during summer of 1858, at her Grandmother’s place, Villiers-le-Bel, Gustave being in Normandy. The surviving family, Palmyra, Auguste and Eugène move to the elegant premises at 35, boulevard des Capucines.

• 1860: OVERSEAS
The Marquis de Briges had financed the photographic company up to 100,000 francs-or, after his death his two sons had agreed to follow on with a contract registered September 1858, but one year later they organise the bankruptcy of the photographic studio and buy it  during a public auction. After a short stay at 15, rue Saint-Lazare, Gustave Le Gray leaves Paris, where Palmyra remains with their only 2 surviving sons (out of 7 children). He will never return but will have a last contact with Auguste: he gives from Egypt his paternal permission for his wedding on 20 Mai 1882, the mother having not been traced. The other son Eugène had disappeared in 1878, Auguste will be the sole heir.