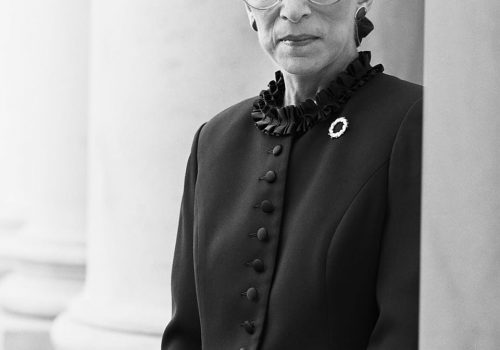 This is the seventh installment of the online series by Peter Fetterman Gallery called the Power of Photography highlighting hope, peace and love in the world. We invite you to enjoy and reflect on these works during this time.

“I came across this image a few years back whilst researching an exhibition on Women and was so moved by it. Taken by acclaimed portrait photographer, Michael O’Neill, it was originally commissioned by Vanity Fair and first published in their November 1998 issue.

Taken outside by the columns of the Supreme Court, it captures the essence of a great woman who has spent her life fighting for women’s rights and gender equality and everything else she believes in. She lives her beliefs and isn’t afraid to voice them as an example to us all now.“

“This has always been one of my favorite music images. It just brings back so many memories for me. I lived near Abbey Road Studios and walked by it every day for many years through all seasons and also being of that generation to whom John Lennon was so much more than just a talented musician. A symbol for my generation.”

“Many years ago I was visiting a wonderful collector and curator in Chicago. It was one of those blistering hot Mid-West days. As I was sipping some iced tea, I noticed out of the corner of my eye this exquisite image hanging on a wall. I just had to get up to examine it more closely.

Josef Ehm was an important Czech photographer, a colleague of other great Czech photographers like Sudek and Funke. I was totally consumed by the mood that this image evoked within me. My host noticing how I was smitten graciously allowed me to purchase the object of my affection. Ehm’s archive resides in the Museum of Decorative Arts in Prague.

I know we all hope in this coming summer for the peace and tranquility this woman is experiencing in this image.”

“This great Herman Leonard image has so much personal resonance for me. I grew up listening to Ella singing all the great American Songbook albums. They were my holy grail. In the 1960’s the great American Jazz promoter, Norman Granz used to bring over all the great jazz musicians to London in his celebrated “Jazz at The Philharmonic“ series. As a skinny kid I used to slip backstage and collect jazz autographs. There was basically no security in those days. I met them all, including my beloved Ella.

Herman was such a classy gentleman. And a really great photographer. He had learnt a lot of his craft as an assistant to the great Yousuf Karsh. This has always been my favorite Ella image with the added bonus of Duke Ellington and Benny Goodman sitting in the audience revering Ella. If you look closely also in the audience. You can see an almost Bill Clinton look alike. One of my great clients was visiting me and she saw it and pointed this out to me. She was a great friend of President Clinton and bought it as a surprise birthday gift for him where it hung in the White House for many years.”

“One of my favorite photojournalist images ever.

It is Father’s Day and some kind souls put on a special picnic for out of work men who are homeless but have still maintained their dignity. And their hats. They are picked up and driven in a bus to a park where for a few hours they can forget their situation.”

“Heinrich Kuhn was one of the great turn of the century pictorialist photographers, colleague and close friend of Alfred Steiglitz and Edward Steichen.

I first came across his work early on as a collector. An image of his was the second photograph I had ever purchased. Alas I had to sell it to start my gallery and the memory of it still haunts me.
But the story of how I acquired this print perhaps should serve as a warning lesson as to how compulsive this disease of collecting can be.

I first saw it maybe 20 years ago and thought then as I still do now that it was one of the most beautiful images, “object”, works of art I had ever seen. Up there with greatest painting that Degas had ever painted. I was just swept away by the romanticism and beauty of it and it haunted me which I guess is the true test of why one should collect anything. The owner did not want to sell it unless it fetched an incredibly large amount of money, a sum way beyond my reach. It got passed from one dealer to another over a period of 10 years, each time the price got higher and higher each time it did not sell. I guess it became a 10 year journey of obsession way beyond any rational behavior.

And then one day I saw it again at an art fair in New York in the booth of the fifth dealer who had been engaged by the irascible owner to sell it for him. Perhaps I had drunk too much coffee that day, but I just broke down and bought it. I don’t regret it even though I thought at the time I should check my self into a mental home. The words that echoed in my ears were the ones I had been told by a very wise Old Master Painting dealer early on when I embarked on my career.

He told me “Peter, you never over pay for a Masterpiece.” He was right.”

“It is amazing to me that a whole culture AND a personal story can be told in one frame.

Arthur Elgort, most celebrated for his fashion work, loves dance and has a curiosity for other cultures as this image shows.”

“May 9, 1974 was a special night in the career of Bruce Springsteen. He was booked as an opening act for Bonnie Raitt at the Harvard Square Theater. His career had been struggling with two unsuccessful initial albums sales-wise for Columbia Records who were about to drop him, but his special magic was sure on full force that night and in the audience was the Rolling Stone music critic, Jon Landau, who penned the immortal lines which turned everything around. “I saw rock and roll future and it’s name is Bruce Springsteen.”

This is one of my all-time favorite music images, but it is so much more than that. It is an image of passion, dedication, determination and focus. All essential elements for any artist.”

“I love portraits, especially of writers, and this is one of the best of the formidable and courageous, Colette.

Janine led a pretty extraordinary life herself from risking her life developing film for the French Resistance to participating in the Liberation of Paris to covering the woman’s liberation movement in the 1970s. I remember an especially stimulating lunch in a simple Paris bistro hearing all the stories of her remarkable life.

What an honor to have met her.”

“Robert Demachy was one of the great turn-of-the-century Pictorialist photographers. In their effort to gain appreciation of photography as a fine art, as opposed to mere documentation, they were deeply knowledgable about painting techniques and carefully planned their images with acute attention to light and created hand-crafted prints with meticulous attention.

I have always wanted to own a great Degas, but do not have a spare $50 million. Perhaps this beautiful image is just as good, if not better.”