Newsha Takavolian, I know why the rebel sings 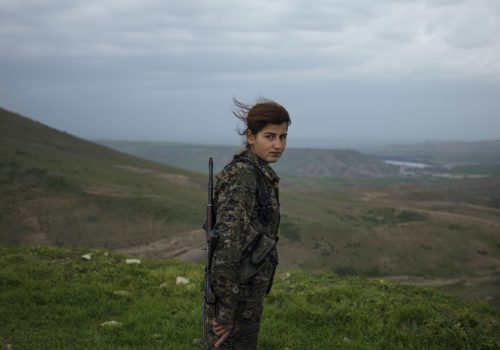 Newsha Tavakolian was born in Tehran in 1981. She discovered photography at age 16 and then embarked on a career as a photographer-reporter. In 1999, she covered the student uprising in Iran, in 2002 the war in Iraq as well as several regional conflicts. She has established herself as a photojournalist and collaborates with major magazines such as Newsweek, The New York Times, Stern, Der Spiegel and Le Monde. Her attachment to her country is strong and complex. In 2009, she covered the Iranian presidential election that ended in chaos and set her to temporarily put aside her journalistic photo activity. Her photography then moved towards a suggested and eminently poetic form. She exhibited in prestigious galleries and museums. Co-curator of the Iran exhibition. Year 38. Contemporary Iranian photography since the 1979 revolution presented at the Rencontres d’Arles in 2017, she clearly says how she gradually carves her writing and how, in her viewfinder, the intimate is political. “I learned to say what I thought through my photos by handling the ambiguity, without ever being explicit. It took a lot of training to get there. This new language has become my signature. It is also detected in the clichés I take outside of Iran. “(Exhibition catalog, Textuel editions, 2017). Newsha Tavakolian is part of the tradition of Persian directors and artists bypassing and modeling the constraint and the forbidden to do work.

It is this assumed choice that is the theme of this Mulhouse exhibition. She presents in an original scenography, photographic series, sound installations and videos dedicated to the youth of Tehran (Blank pages and Look), the fighters of Iraqi Kurdistan in Syria (Ocalan’s Angels), the women of the FARC in Colombia, the Iranian singers facing the forbidden (Listen), to a yazedi victim (A Thousand Words for a Picture I Never Took). Faced with each of these installations, the observer must provide an effort of attention and insistence because the point of view is not given immediately and sometimes overflows the image alone.

Photography is a silent art. Yet the visual compositions of Newsha Tavakolian carry words, sounds. Henri Cartier Bresson referred to the art of portraiture as “the inner silence of a consenting victim”. On the contrary, the portraits of Newsha Tavakolian express cries or stifled songs. This theme of the thwarted expression is at the heart of the artist’s work. Listen offers a look at the female singers who in Iran do not have the right to sing on stage or to release albums due to the Islamic regulations in force since the 1979 revolution. “For me (says Newsha Tavakolian) the voice of a woman represents a power; if you shut up, the whole society is unbalanced and everything is distorted. The Listen project echoes the voices of these women silenced. I let Iranian singers perform in front of my lens when the world had never heard them. Her photographs suggest that a tenuous link between these two means of expression, sound and photography, is tangible and she manages to formalize it visually. And when it is no longer possible to photograph, to use her camera because the subject requires it, the voice of the photographer takes over to tell us in a thousand words the meeting with a young Yazidi girl returning from  Hell (A Thousand Words for a Picture I Never Took). The artist creates an installation that evokes the Rothko Chapel, placing the visitor in front of a monochrome print while the voice of an actress tells us the story of this failed shooting and questions the limits of the photographic act.

Most of the photographic series presented here put the viewer in front of striking portraits that hesitate between the allegorical figure and a dense presence at the edge of animate. The people captured by Newsha Tavakolian are in a fragile place between them. In her installations, she works a sensitive transition by mixing still images and animated images. In the project Look she invites her neighbors to pose in her apartment transformed into a studio, and realizes in the same frame and without romanticism, animated portraits of this confined generation. The viewer becomes a voyeur of introspective scenes. The images of the women in combat bear witness to the same simmering proximity, captured with delicacy. Show on the surface an intimacy that reveals the complexity of a commitment and sometimes a survivor behind the warrior uniform. This is the case of these rebels of the Revolutionary Armed Forces of Colombia (FARC) in the Colombian jungle and “angels” peshmerga. The photographer manipulates the pictorial art of chiaroscuro in her portrait, but a colorful touch often brings us back to a more pregnant reality where the announced desecration of the allegorical figure, the fetish object (plush, scarf, nail polish, jewel, bra), resizes the portrait in a documentary way.

“Like a dancer on a tightrope, I walk this metropolis, ready to fall at the slightest misstep,” confides Somayeh in the series Blank pages. Is not this also how Newsha Tavakolian produces her images, models her writing, and takes a step aside from documentary photography, as a clever, precise, committed and poetic photographer-tightrope walker? Grace to tell the gravity of the world.