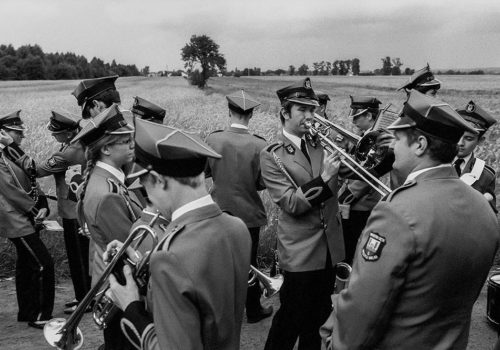 Left in a Limbo by Sean Sheehan

Jacenty Dędek has taken his large format camera into well over 400 towns across Poland, each with a population below 30,000, to produce a book whose title, Portrait of the Provinces, speaks for itself. Nostalgia is eschewed by his strictly documentary approach that avoids sentiment in the pursuit of verisimilitude. The cumulative result of scrupulously photographing provincial life in all its mundaneness could be dreary but not in this case. The English expression about familiarity breeding contempt does not apply and Dędek’s dedication in recording public spaces in small towns, 30 years after the Soviet implosion, reveals an interstice in small-town Polish life.

Young people are outnumbered by the elderly, there are no displays of conspicuous consumption and quotidian life goes on much as might be expected: barbers cut hair; social functions are prepared; bus queues form; youngsters hang out; town bands play and work gets done. The unremarkable is photographed with a remarkable honesty and what adds to the integrity of the more than 350 pictures in black and white – each with its own page or spread across two – is the sense of candour with which townspeople put themselves before Dędek’s camera. Individuals, couples and small groups present themselves with a straightforwardness that does not feel the need for gratuitous smiles, let alone showy posing.

There is a resigned look in many of the faces, mingled with the optimism of youth of those in their twenties but approaching fatalism, if not stoicism, in some of the older citizens. This accords with the text of interviews that are interspersed between the pictures, testifying to the steady drift of young people away from small towns in search of work in cities or abroad: ‘The old people will die off and houses will be left empty’ is one’s person’s gloomy prediction. The 1980s was the last decade when everyone in small towns had some form of employment, hence older people’s expressions of mixed feelings toward the Soviet era, akin to the ostalgie in the eastern half of Germany that shares a border with Poland. Balancing this is the contentment that can come from living close to nature and having the time to appreciate walks in the countryside and other portraits embody the sense of ease and satisfaction that comes from this.

Poland’s past has its own dark side: many small towns were once predominantly Jewish communities, older citizens know where synagogues once stood: someone remembers how ‘they took down the roof, levelled it and later turned it into a grain store’. Prejudices that predated Nazism have not gone away. A recent report names Poland as one of a number of European states making insufficient efforts to combat the anti-semitism that remains relatively widespread in the country. One of Dędek’s photographs shows a Star of David scrawled on a wall, an expression of hostile feelings between rival soccer fans but also indicative of a wider social attitude.

Jacenty Dędek, who started out as a photojournalist in his home town before working for national magazines and becoming a freelancer in 2007, travelled around the country with his wife Kasia on magazine commission: ‘we noticed that many villages and small towns had not kept up with what had been quite dynamic economic changes’ and he speaks of the provinces being left in a state of limbo ‘between the old and the new. And this state was very interesting to us. We wanted to tell the story of these people who’d been abandoned to their problems.’

Dędek, sensitive to the work of Edward Curtis and August Sander and inspired by the projects of FSA figures like Walker Evans and Dorothea Lange, took on an enterprise that began with a six-month scholarship from the Ministry of Culture and National Heritage in 2011 but which lasted six years. Undertaken with seriousness and understanding, Portrait of the Provinces is a unique record of the continuing loss of quiddity in Polish provincial life.