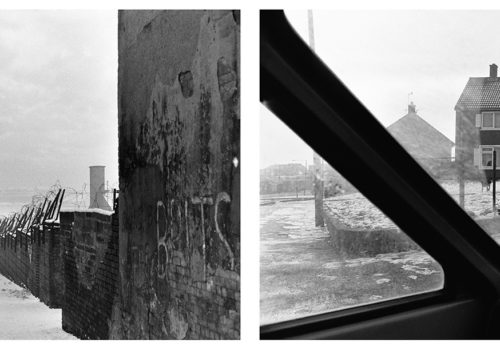 This is an old book, a book stillborn, the book that “never was,” about a time now gone that was bleak, dark, and violent, filled with secrets and murders.

I had travelled to the North of Ireland in the 1970s — after the reintroduction of internment in 1971; prior to and during Bloody Sunday in 1972; and several times thereafter — but it was only in the early 1980s, after finishing Telex Iran, that I decided in earnest to do a book. There are many running fictions about the project, including that I have worked on it for 20 years, 40 years. The fact is that the bulk of the book, both in ideas and images, was made in a few very specific years, 1981, 1984, 1986, 1988 and 1989.The book was essentially finished in 1990, more or less in the shape you see it now, and would have been published at that time were it not for the vagaries of my own life. It had a different title then (it has had many over the last 20 years), and it was about 700 pages, but it already had the structure of 22 semi-fictional days that organizes the two volumes of WhateverYou Say, Say Nothing. That structure IS the book as much as the pictures that comprise it. A warning: The title page describes the work as a documentary fiction, and it is very much that.

In making this book, my intent was to describe a totality in all its simultaneities: Not just to represent what was happening on each side of the divide between Nationalists and Loyalists, or on either side of the class divide between the rich and the poor, but to represent life in all its incarnations. I wanted to describe days where big events, historical events, happen, and I wanted to describe days where nothing happens, intensely boring days, days that never end. I wanted to describe the texture and structure of life, in all its details; what is a glass of beer, a serving of chips, a bed; what is a riot, what is a field, a bird, a cloud. In short, I wanted to describe all that makes a reality, all that defines existence and experience in a space that is ritualized by recurring and cyclical violence over a long period of time. If I could have described air and time passing, I would have; actually, I think I tried.