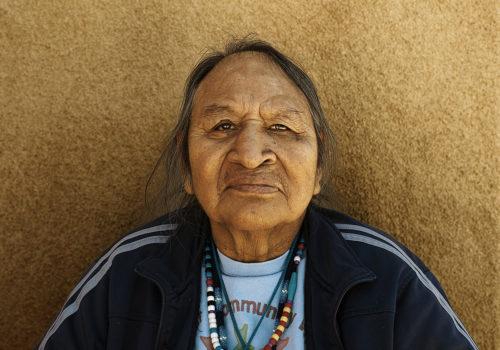 Marion Gronier exhibits a series titled We were never meant to survive at the Galerie du Château d’Eau in Toulouse. She gave us these photos and this text:

North America is haunted by the violence of its colonial history. Promised land fantasized by a handful of white religious dissidents fleeing Europe, it was torn from the natives to be exploited by slaves imported from Africa. Through the faces of the descendants of these peoples who founded the United States, I have sought to bring back the ghosts that haunt this story and to attest to the persistence of this violence which was instituted in the American society by a separation and a hierarchy of races. I have photographed Native Americans in Arizona, New Mexico, and Montana, African Americans in New Orleans, Louisiana, and Mennonites in Pennsylvania. My work is part of the reflection carried today by decolonial studies which denounce and deconstruct the imperialist structures on which our Western societies have been built. Highlighting these structures is already shaking them insofar as one of their strengths is their invisibility and their naturalization. This reflection led me to become aware of my position as a white European artist and to question my artistic medium, its uses and its powers, to also make the ghosts that haunts it reappear. Photography, invented in the 19th century by the positivist sciences, is in fact also a product of this society which intends to dominate, exploit and objectify the world. It is an instrument of its knowledge and of the imposition of it. Thus, the descriptive portrait of Alphonse Bertillon, applied to colonized populations, “scientifically” proved their genetic inferiority and legitimized their subjugation. This device (close shot of the face, motionless subject, frontal gaze, centrality of the framing, neutrality of expression) has left an indelible imprint in the history of the photographic portrait, it has created a coding that operates each time it is set up. “The descriptive portrait exceeds everything by its status as a “scientific” document (…). Far from being limited to recording the appearance of this or that individual, it arouses a veritable proliferation of secondary meanings. From the outset, he designates the subject (…) as a guilty being. »2 Thus, this typological classification, in an apparently cold and neutral form, conceals an extreme violence insofar as « this figuration can only be accomplished in a deadly denial of its own subject. »3 […].