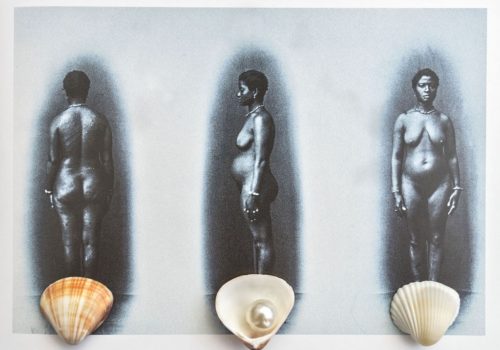 Instituto de Pesquisa e Memória Pretos Novos (the Institute of Research and Memory of the New Blacks) is an important historical site in Rio de Janeiro. It sits atop a mass grave containing the bodies of enslaved Africans who died shortly after they had landed on the continent. In parallel to the permanent exhibition, which tells the story of the place, rediscovered only 20 years ago, the Institute regularly hosts contemporary art exhibitions.

The two artists explore the figure of the mother, and womanhood more generally, in the history of slavery, and look at its traces in the fragments of extant visual testimonies. Using archival documents and images, the artists have created montages and collages, and reinterpreted these images by foregrounding the female figures. No longer just a silhouette among many in scenes representing farm labor or daily chores, women wield small items associated with Afro-Brazilian culture, while the curves of their bodies cohabit those of the Rio de Janeiro landscape; they are shown only to be concealed again, in an interplay between the visible and the invisible that takes place in the context of archival images.

Isabel Löfgren and Patricia Gouvêa have also decided to use this exhibition to give visibility to black women today, and explore the repercussions of the past on the present situation of black women in Brazil. By means of a video, they give voice to black mothers who speak about their place in contemporary Brazilian society, evoking the racist, sexist, and exclusionary acts they have been subjected to.

By choosing not to treat archives simply as a historical element belonging to the past, and instead updating them and placing them in a contemporary context as well as creating a resonance with a topical situation, the artists breathe new life into the history of the city of Rio de Janeiro. They spotlight an important part of the history of a region that is unfamiliar with its own history (Rio was one of the largest slave-trading ports in the world) and refuses to acknowledge its echoes in the present.