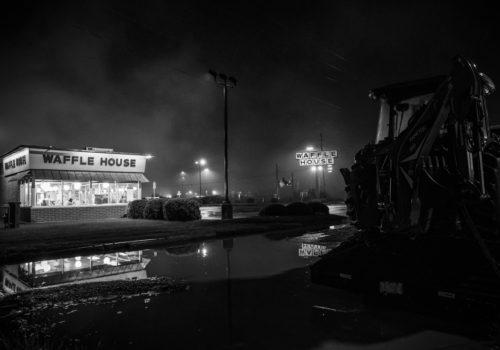 At the end of October 2021, I embarked on a transcontinental photographic survey of the United States to create a visual record of the current face of America as earlier photographers did in decades past — Walker Evans in the 1930s, Robert Frank in the 1950s and Richard Avedon in the 1980s. Being a woman and an immigrant, I hoped to share a different point of view on the country I now call my home.

I encountered openness, trust and generosity and listened to people speak about the importance of family and community, who hoped to make the world a better place through personal initiative and civil courage. In media and politics, we constantly hear about “the great divide,” but this experience points to how each individual meeting can reveal that there is more connecting us than dividing us.

With record-breaking temperatures and radical weather patterns making regular headlines, I  wanted to highlight the need for sustainable travel and chose a Ford Mustang Mach-E electric SUV for the 3000-mile journey from New York to California. Not only is the population continuing to evolve as new immigrants make the US their home, the land is also physically changing as a result of the climate crisis we are facing.

Heading west, I connected to the historic Route 66 in Chicago on the way to Los Angeles, a journey that speaks to America’s historic migration —  a road of hopes, dreams and opportunities. Randomly selecting subjects along the way, using the electric vehicle as a mobile portrait studio at charging stops, gas stations and hotels, I encountered and photographed people from all walks of life.

In Newark, NJ, I photographed two homeless young men, one who had been knifed after selling candy on the street. In Harrisburg PA, I came across a beauty pageant, with girls as young as eight competing. While charging the Mustang in Lebanon, MO, I spotted members of a Christian charity offering clothing and furniture out of a large metal container. In Concho, OK, I spoke with a Cheyenne and Arapaho Social Service officer working to find safe homes for Native foster children. In a Walmart parking lot in Flagstaff, AZ, I photographed a family from Illinois on their way to the Las Vegas Speedway so their 17-year-old son could race.

Against a backdrop of a uniform man-made urban landscape, with the repetition of strip malls, endless parking lots, fast food chains and billboards urging people to consume more, I saw the economic difference between Americans that have, and Americans that have not. As urgent as sustainability is on a global basis, since a large part of the population is in survival mode and barely making ends meet in terms of food, shelter and health care, sometimes sustainability discussions seem like a luxury.

The photographs and films from the journey will be chronicled in an exhibition, a documentary film and a book in 2022.