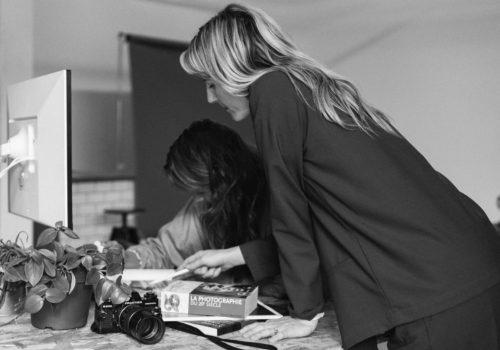 Could you start by introducing yourself and the other members of Elles font la culture?

There are five women behind Elles font la culture. Jennifer Stephan, who is a digital product creation coach, our developer Nadia Auger, Lauriane Fort, product manager, and the two of us, Sarah Witt as deployment manager and Laurie Chapotte, designer and co-host of the Ministry of Culture’s Digital Workshop.

What is the Elles font la culture platform?

Elles font la culture is a digital service whose project was born in early 2021, following a request from the Ministry of Culture’s equality mission, raising the issue of parity in photography. To answer this question, we conducted research with women photographers, cultural institutions, galleries, and associations to define precisely the difficulties encountered but also to observe if answers had already been put in place. From there, we evaluated whether a digital tool would be an appropriate response, by trying out several resources.

What types of resources do you try?

For a better visibility of the existing aids, we have listed on a page of our website the different grants, calls for projects and residencies available. To date, 163 grants are listed. A Resources page has also been set up, with many articles to help photographers with everyday aspects of their lives. This can range from a video on time management during motherhood to pricing, organizing your first exhibition or joining a collective.

There is also a will to create a community

Yes, we have created a group on Facebook so that women photographers can exchange. The other resources we are experimenting with are part of a desire to create more exchanges: we have created webinars and online conferences on various topics such as legal issues, behind-the-scenes of fashion photography or application forms. To go further on this last topic, we asked several winners of calls for projects if they would share their application files to serve as a model. From these documents we have created a library accessible online. Finally, still on the idea of mutual aid, we set up portfolio readings as well as a pricing survey. All of these resources were developed in response to the needs expressed by the women we interviewed during our research phase.

What types of challenges were identified in this research phase?

First and foremost, we see in the numbers that women are very present in photography schools but disappear afterwards. There is a real knot around the age of thirty, where there are no more prizes for young creation, but also the question of maternity arises. At this point there is a dropout that occurs for women. We try to put a maximum of support and resources to counter this phenomenon. For that we wanted to propose practical answers to specific difficulties. The user clubs that we organized highlighted several problems, related to precariousness and isolation, low visibility of opportunities, lack of legitimacy due to the absence of female role models in important positions, lack of technical and professionalizing resources upon leaving school, as well as gender-based violence and harassment.

What has been the initial feedback?

We have received generally positive feedback from the users, particularly about the facilitation of process that this tool allows. Nevertheless, they also raised a fundamental question, that of the institutions. In the ecosystems that program them, there is a lack of training on gender. We therefore decided to create an infographic in order to make inequalities visible and to bring awareness to this problem beyond the women directly affected. In order to bring the institutions to look at these figures we have set up an index evaluating the parity within the structures, whether it is with the direction or with the exposed photographers. We would like to go further on these figures in order to formulate proposals to induce more parity. We have a lot of hope that this parity index can make things change. It is still very new and we will develop it.

Are there similar initiatives in France and internationally?

Which photographic genre is most affected by inequality?

In the press the figures are much more catastrophic than in fashion and artistic photography, where parity is more respected. Women photojournalists are the ones who suffer the most. Just look at the difference between Arles and Visa pour l’image.