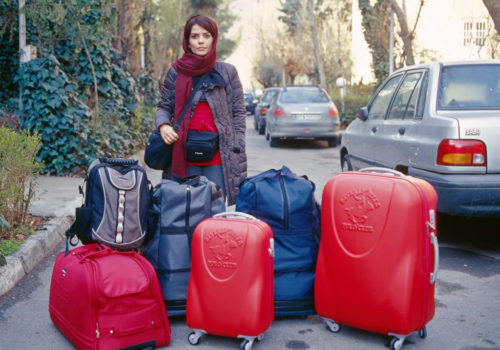 Behnam Sadighi presents  three works : an ongoing series The Last Day (2011-), Holidays and Ekbatan (2010-2012), West of Tehran (2004-2008). My works are based on documentary photography this is how I can materialize my ideas about  my surroundings, the phenomenas which are made by socio-political and cultural issueshave the most powerful effect on Iranian life style and relationship especially in big cities.

The Last Day (work in progress) 2011-2014
This ongoing series looks at the immigration of Iranian youths, to distant countries, who wish to find a better situation in order to have a successful life. They leave their own country, not to experience new things, but because it is a compulsory evacuation, like those flood-stricken people seeking refuge in a foreign land. This is a daily experience, visiting young students who are trying hard to leave their country; some wish to pursue their educational goals and others seek permanent residency.
This project presents their last portraits, taken before they leave their motherland, as a memory for them to hold on, of a land that they might never see again.

Holidays 2010-2012
In this documentary project, I have focused on a group of Iranian youths who go to the country for a couple of days. They want to spend quiet holidays . They choose a place to stay  deserted from others, but even in such a place , something is wrong. Something is not under their control. It seems that, they bring their boredom with them. All of this has a conspicuous effect on their relationships and the surrounding nature.

Ekbatan, West of Tehran 2004-2008
In this project, I have tried to express both my intuitions and feelings about the living situation of modern citizens in the town of Ekbatan in Tehran. This place, is one of the biggest towns in the Middle East and because of its vastness, has over forty thousand residents. It can be considered an example of a place in which modern citizens live. They have their own special relationships. Being fed up with each other is one of the characteristics that have caused them to choose to live solitary lives, while in the same cells. As a result, city-dwellers , are under the pressure of not meeting and not listening to each other. This lifestyle is not what they desire, but it has become compulsory; there is a tendency for some people  to avoid one another and to become insular.
In this situation, the distance of a person to his environment, where all human relations take place, equates to the thick, concrete walls that have surrounded and separated him from a society in which the person sees no one other than himself.