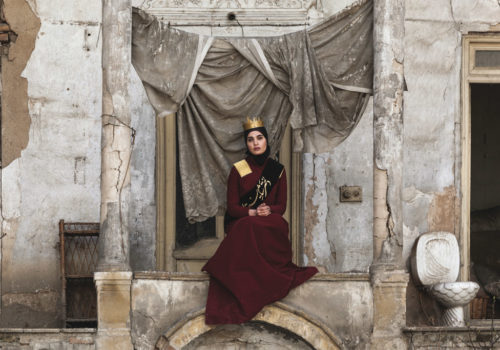 The Silk Road Art Gallery based in Tehran, presents its new solo exhibition by Tahmineh Monzavi titled “All about me nicknamed Crown Giver” until May 18th, 2015.

In a dusty decadence, forgotten and rusty crowned people portrait the lacklustre nightmare of a damp house for me. I search for a familiar sign in the strangeness of the faces. They want to get far away. Like these very same old brass crowns, they want to be a remote sign of what they have once been. The houses in Grape Garden Alley, the houses of dust. The aristocratic houses are dust covered memories, and suspicious looking.

Miss Beauties run to prove their merits and their unsuccessful effort is to win the lost rank of beauty and vanity. Life becomes a chair, it becomes a stare, it becomes staring at their whirling, and a sneer and a chortle that there is always one chair short for the best ones. There is always someone who fails in occupying the chair, and she falls apart.

In the real world, Miss Beauties appear on the stage to display their best in a predefined framework, in an imposed space, with a beaming smile, with a doll-like face devoid of inner feelings. Individuality of these girls is castrated and the portrayal of the appearance is the sole element of their attraction.

The way Miss Beauties are chosen seems somehow similar to our childhood game. Whoever sits on the chair faster deserves the loftiest status. Regarding the hidden capabilities of every woman in the society to be a chosen one, and disregarding looks, culture, and even social class, meritorious Iranian girls and women can be seen easily on the city’s pavements and squares.

This documentary was shot between 2010-2012 . She was 39 at the time . She lived in a house in the south of the capital.
A shelter prepared by the government for such tragic women preventing them from sinking even more into the swamp of their lives.
“Some people happen to be men, some people happen to be women, some others are like me. Why should there be a difference between people” Tina said while being offended in the street. This is how she sees the world.
She felt  safer and more understood by these women; that’s the point of this shelter; being accepted by a society . It was a place for her to call “home” after so many years of struggle.

“I always assumed I’m the only one with such defect I always hid my pain, though others could feel my differences from a normal boy.” Tina said with sorrow in her voice.
Tina was a very emotional woman trapped in a mans body.
Dealing with the very talked-about matter of sexuality.
Tina is a Transexual
Her real name is “yashar”. Or at least that’s what she was named when she was born.
She found out about her problem in her early years; noticing differences from other boys.
A gender identity disorder that was found out about by her parents in the following years as they took her to a legal medical center for examination.
A place she now wishes she had never gone to , her words.
“Before the results came out I was very much loved as I was the only child. I had my own bedroom,my very own bed,I used to be happy. I remember the day my father received the doctors report . He was so sad, he sat and held his head in agony, then after a few minutes of ever lasting silence he suddenly got up and started hitting me until i couldn’t breath” said Tina.
A report that she herself never read but was very much punished for.
The house never after saw a joyful day . The father punished Yashar for a crime she didn’t even commit.
And after some very painful years she was totally abandoned by her family.