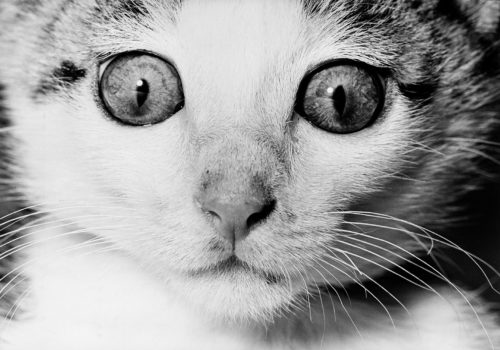 This book brings together Masahisa Fukase’s photographs of his cats, Sasuke and Momoe, presenting both the most iconic and a selection of unpublished ones. His cats became a major subject, particularly in the late 1970s, and a field of limitless experimentation for the Japanese photographer, who was among the most radical and original of his generation. They were the subject of several books during his lifetime, and Tomo Kosuga has immersed himself into the artist’s archives to conceive this book as the culmination of a series of publications dedicated to his cats.

As he began to make a name for himself on the international scene, Masahisa Fukase turned his lens to his new companion in 1977: his cat Sasuke. Surrounded by felines since childhood, Fukase decided with the arrival of this new kitten to make it a photographic subject in its own right, fascinated by this lively creature named after a legendary ninja. To his dismay, Sasuke disappeared after ten days and the photographer put up a hundred posters of his lost cat (those on the cover of the book) in his neighborhood. A person brings him back his cat but it is not Sasuke, yet he welcomes him with as much affection: “My second Sasuke was just as cute as my first one“. He takes him everywhere with him and they go to the countryside together, in the summer of 1978: “My only duties were to fix Sasuke’s meals and to feed myself. […] I spent all my time playing with Sasuke, and taking shots of him.“ The result is about sixty films! With all the technical and visual inventiveness that characterizes him, Fukase explores a new practice, that of “photographic expression“ between the photographer and his subject, as Tomo Kosuga explains in his text. A year later, he welcomes a second cat, nicknamed Momoe, who will also enter the frame and he will not tire of photographing their games. He will dedicate a series to their yawns.

As is often the case in his work, this is a form of projection of the photographer into his subject. The cat, a faithful companion who does not leave him, takes the place of his wife, an eternal heartache, represented later by the emblematic fleeing crows. Before this famous series, his work on cats testifies to this artistic search to witness the “pure experience“ of the encounter between two beings.

“I spent so much time lying on my belly in an effort to get on the same level as a cat that I became a cat. What could be better than taking photographs of these two creatures I loved, frolicking around day after day. I wasn’t interested in the grace or cuteness of cats. I saw myself reflected in the cats’ eyes. I wanted to photograph the love that I saw there. You might say it’s a collection of self-portraits more than shots of Sasuke and Momo.”– Masahisa Fukase

Q & A – Tomo Kosuga, Director of the Masahisa Fukase archives

When did Fukase’s passion for cats begin?

Since his childhood on the island of Hokkaido. In his diary, Masahisa Fukase, explains that he has always had cats. He is shown in a family photo when he was three years old with the calico cat, Tama, who lived with the Fukase family until he was sixteen. And as soon as he arrived in Tokyo, to study, he got a cat to chase away the rats that were in his small flat near Asagaya station. So he got one, which he called Kuro, but which soon left his home.

His favourite cat is obviously Sasuke…

Yes. Sasuke has even been the subject of three publications: Sasuke! My Dear Cat and Viva! Sasuke, in 1978 and The Strawhat Cat, in 1979, but let’s not forget the calico cat Momoe. It should also be noted that at that time, Japan had a real craze for domestic cats. That said, Fukase was always fascinated by his immediate surroundings, whether it was his family, whom he photographed a lot, or his cats. But in reality, he didn’t know why he was constantly framing them with his lens. But he liked to say that, because he was crazy about his cats, no one else could photograph them as well as he did.

You would think that many of the photos are staged, so funny and totally unexpected sometimes…

In reality, Fukase let his two cats frolic together because they got along so well. Momoe loved to pounce on Sasuke, to force him to play with her, and Fukase, who often got down on his stomach for his shots in order to be at the height of their view, enjoyed photographing them every day.

Can it be said that these cat pictures are also Fukase’s self-portraits, like other series he has taken?

Absolutely. In fact, he acknowledged this. He was not interested in feline beauty, but in his own reflection in their eyes and his love for his cats. For Fukase, photographing them was also a way of caressing them. He was very tactile and the sense of touch in photography is very prominent in his work. Another example is the Berobero series, in which two tongues, his own and those of people around him or his companions, touch each other. It can be compared, visually, to all those photos where we see Sasuke’s tongue hanging out, while he is yawning…

Born in 1934 on the island of Hokkaido, in the north of Japan, into a family of studio photographers, Masahisa Fukase was meant to take over the business, but after studying photography in Tokyo, he launched a career as a freelance reporter in the late 1960s. He initially worked for magazines and in the advertising field, but later began more personal work. It was in 1971 that he published his first photography book, dedicated to his family, through group portraits. In 1974, he cofounded the Workshop Photography School with Shomei Tomatsu, Eikoh Hosoe, Noriaki Yokosuka, Nobuyoshi Araki, and Daido Moriyama and that same year, the MoMA in New York dedicated a milestone exhibition to them: New Japanese Photography. But it was the 1986 book The Solitude of Ravens that was to reveal Fukase, featuring his wild and incredible images of ravens, work undertaken after his divorce from Yoko, his second wife. “I become a raven” the author even wrote of this series that was to become a landmark in the history of photography.

Victim in 1992 of a fall in the stairway of his favourite bar, Masahisa Fukase went into a coma at the age of 58 and was maintained on life support until his death in 2012.

Sasuke is the second publication at Atelier EXB following the survey monograph on his oeuvre, Masahisa Fukase, published in 2018.

Accompanying the release of Sasuke by Masahisa Fukase, we have conceived two limited editions, numbered each from 1 to 30, including the book and a choice between two collotype prints produced by Benrido studio in Kyoto on Torinoko White Washi paper.