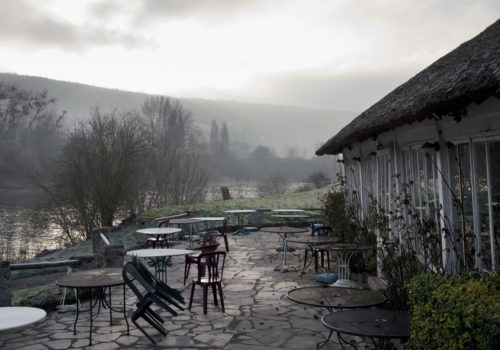 As part of the Mois de la Photo du Grand Paris, the exhibition Au fil de la Seine, de Paris à Mantes (Along the Seine, from Paris to Mantes) is putting side by side about twenty Henri Cartier-Bresson photos from the 1950s and Ambroise Tézenas command from the l’Hôtel-Dieu in Mantes-la-Jolie. This excerpt written by Gabriel Bauret, the exhibition curator, appears in the catalog published for the exhibition.

Today two photography series are compared in this exhibition and in the work published on this occasion. They are developed around the same theme, the Seine, but embody two very different visions and eras. On one hand, there is the work specially carried out by Ambroise Tézenas for the Musée de l’Hôtel-Dieu of Mantes-la-Jolie. He build, over several months, an image of the landscape as it was laid out before him along his travels. And on the other hand, echoing this project, a tribute to Henri Cartier-Bresson, one of the major figures in French photography, who, in the 1950s, surveyed the banks of the Seine from its source up to the Port of Le Havre.

Between the 1950s and today, it is not only the landscapes of the Seine and the society that has changed. It’s also photography. For this reason, it was tempting to examine these two works to point out their differences. It is evident that now we can no longer photograph people in the street with the liberty Henri Cartier-Bresson had. In this way, his practice belonged to history and that is what gives it all the more value and interest. In turn, Ambroise Tézenas incarnates a contemporary conception of photography through the use of color, a certain format, and the rhythm of his shots. But there is also a particular attention paid to the subject; he brings out a silent harmony in his photographs and a number of them are like so many peaceful moments. His photography operates on another register and differentiates itself from that of Henri Cartier-Bresson. There remains, however, outside the theme of the Seine, a relative common point in their biographies. Henri Cartier-Bresson in the 1950s and Ambroise Tézenas today have had a moment in their journey where they enjoy full command of the language of photography and the use they wish to make of it.

Gabriel Bauret is a journalist (Zoom Camera International) and French exhibition curator, specialized in photography. He lives and works in Paris.