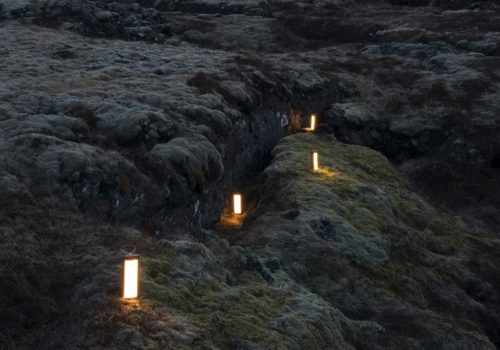 For his first collaboration with Le Monde d’Hermès, the luxury brand’s twice-yearly magazine, Ambroise Tézenas went to Iceland  to photograph bags, watches and scarves in the wild landscapes. An interview with the photographer about the shooting background .

You’re usually a landscape photographer, how did you react when Hermès contacted you to shoot still-lifes?

At first, knowing the Hermès culture in the matter of photography and its high standards, I was quite flattered that this luxury brand would call me. I also found it interesting to be cast against type , or almost. It’s true that I’m not a still life photographer. So it was taking a small risk to ask me to photograph objects, since it was a question of shooting  in a natural setting, that is, in the wild. As a result, it was a great challenge for me to accept.

How did the shooting unfold?

We left for two whole days, that’s two sunrises and one sunset. It’s important because we only worked with natural light, nothing was lit artificially. That way I was able to work as in an extension of my personal work, a large part of which brings together photographs taken at nightfall,  with the addition here of objects, of course.

Did you have to improvise for the production of this work?

We were in a small group, without a stylist, so the placement of the objects in the natural setting was done in a rather natural and improvised way. It was lucky and I appreciated this freedom since we played with the different elements we found on the spot: the rocky soil, the moss, sometimes green, sometimes grey… It was creating connections between the different types of objects to be photographed and the setting, like for example the watch  as if  in a jewellery box in the moss, or even the lanterns creating a path as the night falls…

What’s your favourite image in the series?

The scarves that were hung by chance on a flagpole , transforming them into flags. For it to work, there had to be a little wind… and the wind blew!

Exhibition to come at the Greater Paris Photo Month

Ambroise Tézenas/Henri Cartier-Bresson
From Paris to Mantes, along the Seine
From 8th April to 9th July 2017
Musée de l’Hôtel-Dieu, Mantes-la-Jolie