Abbas by Abbas, the last message from a master of photography 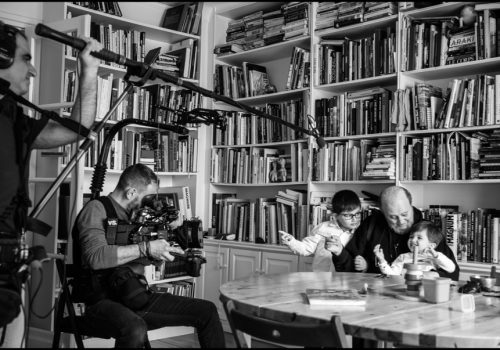 The emblematic photographer of the Magnum Photo agency delivers in this wonderful documentary directed by Kamy Pakdel, a unique testimony to his life. Precious legacy of the great Franco-Iranian photojournalist who disappeared in 2018 at the age of 74. To see in replay on lcp.fr.

“We do this kind of film just before we die.” Feeling weak and condemned by the disease, Abbas Attar accepts in 2018 what he had always refused: a film portrait of his work that the director Kamy Pakdel had offered him 20 years earlier. If the man, very modest, has always wanted to be discreet, his photos made the big story speak. From Israel to Northern Ireland via Sarajevo, Vietnam, Iran or South Africa, Abbas has tirelessly covered the great tumults of the end of the 20th century for more than fifty years.

“I put an emotional veil between the stage and myself”

In front of the cameras, the photographer agrees to take the opposite path. Camera still in hand, he leafed through his albums in the Paris offices of the Magnum agency, which he joined in 1980 after working for Sipa and Gamma. The photos scroll by themes. Fanaticism, spirituality, beauty, derision … Violence is the first. “Unfortunately my most extensive chapter,” almost regrets the photographer. The first image: Moshe Dayan’s bunker, taken during the Yom Kippur War in 1973, on the Syrian-Israeli border. The soldier with the eye patch, hero of Israel, became Minister of Defense. From the slit of a bunker shredded by artillery fire, he watches enemy lines through a single eyepiece of his binoculars. One of Abbas’ first scoops.

Follow the clichés of the Islamic revolution in Iran. “I was concerned, involved, it was my people,” said the Franco-Iranian. The photo of this woman, accused of supporting the Shah, molested in the street, that of the bodies of the generals exposed in the morgue … From 1978 to 1980, Abbas frantically covered the crisis that hit his homeland. How do you handle these extremely violent scenes? “I’m putting an emotional veil between the stage and myself,” said Abbas before adding. Then it comes back later in my nightmares. Like time bombs. ”

The ethical question often arises. Should we publish this photo? The photojournalist returns to his photo, taken in 1978, which has become the symbol of apartheid. A uniformed white colonel, director of a police academy for blacks, poses, bossy, in front of his naked torso students arranged in rows. A staging organized by Abbas. Had he disguised reality? He will see this man again 20 years later. “He was a very nice man, not at all fanatic. Here, it’s not the man I’m photographing, but the uniform, the state, “he said.

Abbas’ work offers us a fresco of humanity in black and white. Humiliation, man’s suffering: This woman surrounded by several soldiers in Northern Ireland, screaming in pain after being injured by an IRA bomb in June 1972. This Bosnian soldier, mourning his missing wife every day , in a cemetery in Sarajevo in 1993 …

In each photo, each report, the impressive thoroughness of Abbas strikes us. “Even when I photograph chaos, I try to order it,” he jokes. Master of the backlight, its black and white is infinitely rich, its composition so methodical. “The photographer is the one who writes with light”, he likes to recall while walking in the streets of Paris. Behind each shot, Abbas seeks to “capture a suspended moment”, to give the impression that the subjects continued their action after the device was triggered.

Curious about everything, his eye stops for a long time on religions. One of the most important subjects of his career as a great reporter. Islam, Christianity, Copts, Hindus … Abbas travels the world of faith, fanaticism, and maintains “a cordial professional relationship with God, “, he says amused. Religion is a pretext for him to “watch these societies in the making”. He devoted 30 years of his life to it.

“After more than 55 years of photography, what will be left? “

The 74-year-old no longer has the full beard of his youth. Illness and extreme fatigue sometimes forced him to stop filming. But he lost neither his humor nor his malice. Under his hat which slightly crushes his ears and behind his round glasses, we find him laughing, full of derision. His photography is bathed in this same irony. We smile at the absurdity of certain scenes: this mujahideen, Kalashnikov in hand, taken by the side of an Afghan road, sitting on a bunk bed made of scrap metal buried in the mud, or this Mexican, lost in the middle of the desert, carrying on his back a wooden table like Atlas supporting the world. One of Abbas’ favorite photos.

In a few days of interviews, Kamy Pakdel succeeds in drawing a very touching portrait of a monument of photography which is about to bequeath its heritage. “I am coming to the end of my life as a photographer, at the end of my life. After more than 55 years of photography, what will be left? Asked Abbas to his interlocutor. He gives us here a magnificent testamentary testimony. Abbas will never see the end result of this film. He died in April 2018, a week after the end of filming. Clap end for a universal eye.

Available for replay until June 11 on Lcp.fr