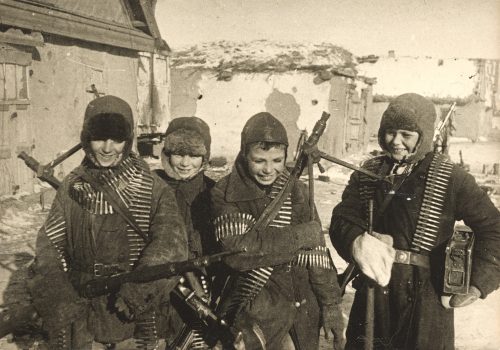 »As far as war photographs are concerned, I am always touched and often amazed when I discover images that are not just historically relevant, but also reveal an artistic motivation, the motivation to capture something ‘aesthetic’ or even ‘poetic’ in a picture, at a time that actually does not permit it.«

The exhibition Echoes of War presents a selection of original photographic images from the Second World War. The Photographs follow the gaze of those who observed, caused and lived through the events, resulting in visual documents where politically and strategically important information as well as fleeting and poetic moments are captured. These historical photographs tell individual stories that present the subjective views of the various individuals behind these pictures and the far-reaching echo of the stories they tell.

The photographs originate mostly from Germany, England, France, Poland, Russia and the USA. Having acquired the photographs through auctions, private research, contacts to fellow collectors, contemporary witnesses and antique dealers worldwide, the Russian-American artist photographer Benita Suchodrev obtained a treasure of personal memories that spawns historical insights, promotes dialogue and challenges the viewer with an unusual approach to the war experience. The photographs had been taken by professional war correspondents, soldiers and private persons and show rare aerial shots, pictures of public executions, parachute jumpers minutes before landing, Soviet and German child-soldiers and everyday life in bombed cities during and after the war.

The more than 130 selected motifs are accompanied by the original captions whose choice of words adds an additional layer to the visual experience, revealing propagandistic thoughts and personal dedications.

The exhibition does not set out to make a political statement nor beautify the atrocities of war. Compiled and curated from the viewpoint of an artist and photographer, Echoes of War raises new associations that are unburdened by strict scientific connotations. Instead it documents the dark and light moments, the human effort to keep visual aesthetics alive under barbaric conditions and the varying perceptions of a world at war.

»Many of us know people who had lived through the Second World War. We, the post-war generations have been able to gather countless impressions, but ultimately these are only echoes, secondary manifestations that can never be as clear and distinct as the original sounds. Nevertheless, these echoes serve as the memory and confirmation of the fact that these sounds really existed.«

Benita Suchodrev is a Russian-American portrait and documentary photographer concerned primarily with the representation of the human subject in a sociocultural context. She works intuitively with great regard for authenticity, spontaneity and “the decisive moment”

Benita Suchodrev was born in the former Soviet Union and immigrated to the United States in 1990 where she received her Bachelor’s degree in Liberal Arts with a focus on Art History, followed by a Master’s degree in English Literature, graduating with high honors. In 2008 Benita relocated to Berlin and began an extensive documentation of the cosmopolitan city’s multifaceted art scene while working on diverse photographic projects.

Her photographs have been exhibited in solo and group shows nationally and internationally and covered by various television, radio and print media. They are part of the Rafael Tous Foundation for Contemporary Art in Barcelona, the Michael Horbach Stiftung in Cologne as well as private collections in Moscow, Berlin and New York.

Photographs from the Second World War