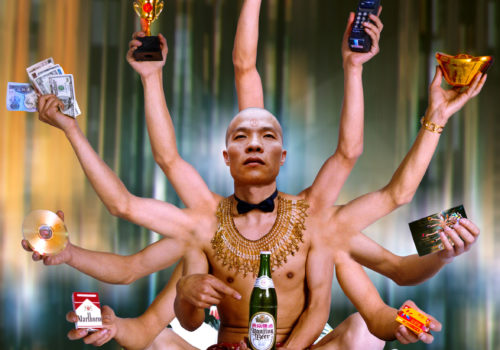 Wang Qingsong: When Worlds Collide, a solo exhibition by one of China’s most innovative contemporary artists, is on view at the International Center of Photography. Featuring a dozen large-scale photographs and three video works, it is the most extensive U.S. showing to date of the work of this leading Chinese artist.

Since turning from painting to photography in the late 1990s, Beijing-based artist Wang Qingsong (pronounced “wahng ching sahng”) has created compelling works that convey an ironic vision of 21st-century China’s encounter with global consumer culture. Working in the manner of a motion-picture director, he conceives elaborate scenarios involving dozens of models that are staged on film studio sets. The resulting color photographs employ knowing references to classic

Chinese artworks to throw an unexpected light on today’s China, emphasizing its new material wealth, its uninhibited embrace of commercial values, and the social tensions arising from the massive influx of migrant workers to its cities.

Because he uses elaborate studio settings and stylized arrangements of models to make his enormous color photographs, Wang Qingsong is sometimes likened to such contemporary artists as Gregory Crewdson. A more telling comparison, however, might be to an earlier figure like George Grosz, whose paintings from Weimar-era Berlin are similarly filled with needling social observation, sardonic humor, calculated awkwardness, and sometimes grotesque exaggeration. In Wang Qingsong’s works, the artist’s deep-seated attachment to his country mixes with frequent dismay at its boom-era excesses. China. He recoils from what he calls the “superficial splendor” of today’s Chinese nouveau-riche taste, yet he also insists, “I like Chinese civilization. It offers an enormous space for imagination. Things take one form today, and then change to another form tomorrow.”

Wang Qingsong: When Worlds Collide includes twelve of the artist’s oversized photo works—some measuring up to 21 feet in length—and three of his recent videos. In addition, a series of documentary videos on view adjacent to the exhibition galleries takes viewers inside the artist’s studio, allowing them to follow step-by-step the creation of several of the major works appearing in the show.

Featuring a dozen large-scale photographs and three video works, it is the most extensive U.S. showing to date of the work of this leading Chinese artist.

Wang Qingsong Biography
Born in 1964, Wang Qingsong grew up in the Daqing oilfields in Heilongjiang Province in northeastern China, where his parents were employed. From a young age he set his sights on becoming an artist, although the path that he followed was hardly an easy one. When his father died in an oilfield accident and left his family without financial support, the 15-year-old boy immediately took his father’s old place on a drilling platform and worked there for the next eight years, while continuing to take art classes and to seek admission to China’s top art academies. Following his acceptance by the prestigious Sichuan Fine Arts Institute, Wang Qingsong trained as an oil painter, graduating in 1992. Determined to make his way as an independent artist, he arrived in Beijing in 1993, just as Chinese contemporary art was beginning to attract international attention.

Wang Qingsong first won recognition as a painter in the mid-1990s through his membership in the Gaudy Art group, a movement influenced by the work of Jeff Koons and championed by China’s most influential art critic, Li Xianting. In 1997 he abandoned painting and took up photography, a medium that enabled him to quickly register and comment upon the economic and social changes that were sweeping China. His work has now appeared in more than 20 solo exhibitions and over 80 group exhibitions.

Until May 8
International Center of Photography
1133 Avenue of the Americas at 43rd Street
New York, NY 10036