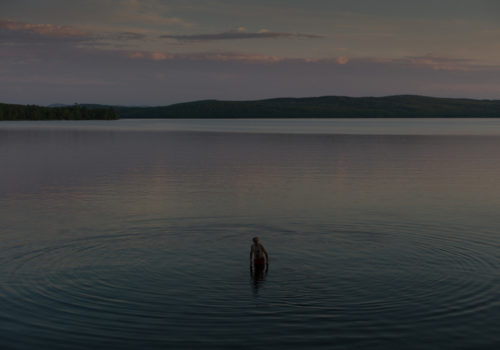 “One year after your death, it still hurts.” This sentence is central to the Michel Huneault exhibition at the Contact gallery, which explores the aftermath of the railway disaster that left 47 dead in Lac-Mégantic, a small city in Quebec in July 2014. The viewer wanders freely through the restored gallery between photographs alternating in lightness and format, like paintings, and the recorded testimonies of the people whose lives were forever changed on that terrible night. Winner of the Portfolio Reviews Exhibition Award at the 2014 CONTACT festival, Huneault responded unflinchingly to my questions and spoke to us about his artistic approach.

When did you decide to take a more long-term and “non-news” approach to this subject?

MH: When I arrived on the scene, there were still flames from the explosion, which you can see in my first photographs. The idea for the project came to me on July 10th, four days after the tragedy. We were all anxiously waiting for the head of the train company. He came, made a little speech, people were yelling at him, and by the end of the day, everyone had calmed down a bit. It was like a bubble had burst. Afterwards, the city became tense again. We had arrived at the end of the story as “news,” and began to see it in more extended terms. That night, I was sending my photos to the different agencies I was working with. I was walking to my car to get my computer and a man was there. He was looking at me and I asked him if everything was alright. “No,” he said, “my city just blew up.” We talked for a bit and he told me his story. He needed to talk to someone, and twenty minutes later, as he was leaving, another man arrived and, instinctively, began to tell me his own story. I listened, absorbed. I was tired from the week. I went for a walk and found myself headed towards the lake, and I came across the last stretch of railroad the train crossed before it exploded, 100 meters away, and the idea began to germinate. Initially, it was the idea of the night. I had flashbacks to childhood nights on other Quebec lakes, and I told myself that those kinds of memories would come back to haunt these people, just the scent of a summer night. Nighttime is when people find themselves alone with their memories and dreams, insomnia. It all started with that, then it became a “big night,” in the sense of going through mourning, darkness, waiting for the morning light before night falls again.

At what point did the citizens of Lac-Mégantic began to trust you enough to let you into the intimacy of their pain?

MH: It happened gradually… I think of Jacques and Daniel, the people I met on the first day. But their portraits were taken three or four months later. What helped a lot was that I was staying with Jacques. It was one of the last houses before the security perimeter. The locals wanted to get involved. Jacques became a bit like my fixer, keeping me up to date, calling me with developments, both for his project and another one, Contamination+Addiction. He was one of my first “bridges” to the community. After a month, most of the other journalists had left. “You’re still there?” they’d ask me. It’s a little village. The people see each other, talk to each other, the first publications came out. It was word-of-mouth. The trust came little by little, thanks to Jacques and the other people I saw. The local newspaper published an article about my project. The farther the project went , the fewer pictures I took. It became a human relationship.