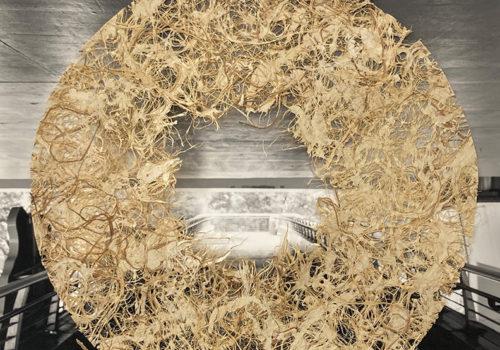 Blanco-Uribe’s works address the most pressing problems of our day. He presents his views in a spectacular and diverse way, without us feeling that he represents the only view accepted and presented by the majority. He does not seek to tell any truth either visually or verbally. In the titles of his series, he very consciously and self-reflexively indicates the structural interventions, the incisions with which he breaks, deconstructs and disperses what is perceived, which until then meant the apparent daily life of the natural environment.

In his latest works, Gustavo Blanco-Uribe examines the interactions between nature, geometry, and architecture, which is a silent call for attention to the importance of our ecosystem. In his words, the coexistence or meeting point between the natural and the architectural is expressed in a graphic and a pictorial way.

In his graphic work or based on photographs, by superimposing spaces, the vision creates a game between silhouettes and organic forms, like the leaf of a plant, which becomes a window to architectural forms radically opposed to nature. Gustavo seeks for the viewer to stop, observe, enter and leave the spaces presented, thus creating his own interpretation, in addition to evidencing in this passage, the passing of time. In the pictorial expression we can also find the juxtaposition of the organic and the built, but in such a way that the rough and heavy geometric forms are found within the gesture applied to a paper that, due to its traditional and ancestral characteristics, asks for it.

The presentation of paintings and photographic works within an exhibition is conscious on the part of the artist; in one he seeks immediate understanding, while in the other he directs attention to emotions through the abstract, the concrete, and gesture.

The Venezuelan-born artist completed his studies at the Altos de Chavón and Parsons Design schools. He started his career in New York, where he opened his first studio (Studio in DUMBO). He currently lives and works in Madrid, where his atelier is part of the Mala Fama Estudios collective. After the successful presentation of Sinérgica in 2019, Punto de Encuentro is his second solo appearance at TOBE Gallery.