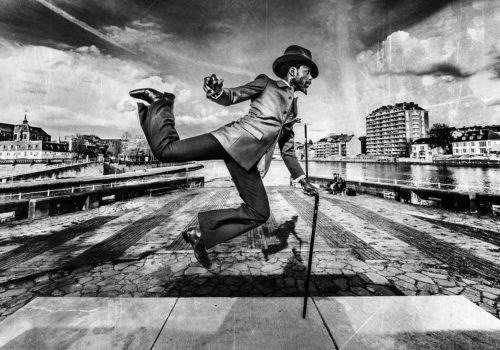 In the city and at work, Léa Lund and Erik K are one and the same. She, native of Lausanne (Switzerland) and graduate of the ECAL, is a photographer and visual artist. He, often considered a dandy, was born in Lubumbashi (Zaire) and moved to Switzerland in 1998, he is a multidisciplinary artist, hat designer, and above all his wife’s “muse”. Their meeting is at the origin of an obsessive photographic work of which Erik is the only subject. Black & white images of an incredible density, heckled by scratches that could be those of a wild animal, give this so particular signature. If their creativity is always intimately linked to their lives, Léa likes to play with codes, which explains why their work is perceived differently depending on the place where it is exhibited. In Europe, they are considered photographers of elegance and architecture, across the Atlantic, in the post Black Lives Matters context, some of their images would never be shown and in Africa the artist is Erik, Lea is invisible although the copyright is shared and it is their photos.
Atypical and nomadic, with complementary imaginations, their life is like an artistic performance coupled with a love story or vice versa!
To be continued…

Your first photographic trigger ?
Lea Lund: Pictures of jazzmen in magazines when I was 10 years old.
Erik K: The photograph of Mohamed Ali with his fist raised after his victory against George Foreman in Kinshasa.

The man or woman of images that inspires you?
Lea Lund: It is impossible for me to name just one, I am inspired by many images, whether they come from famous or anonymous people, archival images, painting, photography, engraving, drawing…
Erik K: Ernest Bieler.

The image you would have liked to make?
Lea Lund: I already did it.
Erik K: To make a photograph of my mother, whom I did not know, and to make an etching inspired by this image.

Which one moved you the most?
Lea Lund: The photograph of my daughter taken by the midwife, when she had just given birth in the water, and was sitting with her son in her arms, her knees bent to the side, and her head bent over him.
Erik K: The terrible image of a young woman killed by rebels during the Kivu war in eastern Congo.

And the one that made you angry?
Lea Lund: The picture that was in the camera that was stolen from the TGV in Brussels.
Erik K: The ones of the black slaves chained and bound like merchandise for export on their way to the Americas on ships.

A key image in your personal pantheon?
Lea Lund: A Mexican post mortem photograph.
Erik K: An image of the globe.

A photographic memory from your childhood?
Lea Lund: I got a little camera when I was eight years old. I photographed some chickens that had taken refuge under a hay barn. I thought I would make an extraordinary report about wonderful chickens! At the time, we received a white and yellow Kodak bag with the negatives and the photos; they were all underexposed, I was terribly disappointed!
Erik K: The photographs taken with a Kodak camera at home, in Aru, on the border with Uganda, where there were always many people.

Without a budget limit, what would be the work you would dream of acquiring?
Lea Lund: Damien Hurst’s diamond encrusted skull.
Erik K: The Scapigliata by Leonardo da Vinci.

In your opinion, what is the necessary quality to be a good photographer?
Lea Lund: There is no good or bad photographer. Everyone has different qualities in relation to the work they are carrying. I am wary of generalizations…
Erik K: Being able to learn every day. Nothing is taken for granted, fortunately…

The secret of the perfect image, if it exists?
Lea Lund : Don’t miss the appointments with chance…
Erik K: Its simplicity, its purity. Not many details…

The person you would like to photograph?
Lea Lund: I got it, it’s Erik!
Erik K: Patrice Emery Lumumba and my mother.

A must-have photo book?
Lea Lund: The one I dream of making.
Erik K: Any book by Jeanloup Sieff.

The camera of your childhood?
Lea Lund: I don’t remember the brand of the first camera I had in my hands. The first one I remember is my mother’s film SLR. She was an architect and used it to take pictures of construction sites. She gave it to me as a gift.
Erik K: A Kodak.

The one you use today?
Lea Lund: I don’t like to name brands.
Erik K: Not being the photographer, but the muse, I use a small Lumix to capture memories.

The best way to disconnect for you?
Lea Lund: Hiking and swimming.
Erik K: Swimming.

What is your relationship with images?
Lea Lund: When I was very young, I studied Drama at the INSAS in Brussels. I couldn’t stand stage fright, so I turned to graphic arts. I like the fact that when we show our images, the emotional moment of creation is over. I like to let myself be invaded by an image, to dive into it in a way. What fascinates me about photography is the fact that you can stop a moment and make it eternal.
Erik K: The emotion it can provoke in me. The emotion is pure, sincere, deep. It’s magical!

Your greatest quality?
Lea Lund: It’s not for me to say…
Erik K: I don’t know. Maybe accepting others as they are. “True tolerance is tolerating what is not right for us”. A real challenge!!!

Your latest folly?
Lea Lund : Too personal to be published…
Erik K: Two years ago I bought two paddles, one for Lea and one for me. But we only used them once on Lake Geneva. Because we are always on the move. Real nomads…

The job you would not have liked to do?
Lea Lund: Civil servant.
Erik K: Working in a prison, where humans are locked up, some of them for life.

Your greatest professional extravagance?
Lea Lund: Taking down an 80-picture exhibition the day before the opening because the gallery owners were horribly unpleasant.
Erik K: Risking my life by jumping over a castle moat in Seville for a photograph. Lea was so shocked that I never did it again.

What do you think are the bridges between photography and design?
Lea Lund: A photograph is composed, constructed like a drawing or a painting. I did 30 years of drawing before I started to do only photography, when I met Erik.
Erik K : Architecture, and also sculpture, statuary, furniture are fantastic elements of exploration and scenery for our photographs.

Which city, country or culture do you dream of discovering?
Lea Lund: There are so many… I love Europe, but I have never been to Asia, India, I know very little about South America, the Far North, Russia. Life is too short to discover them all…
Erik K: Russia.

The place you never get tired of?
Lea Lund: My bed.
Erik K: The same!

Your biggest regret?
Lea Lund: I don’t have any, I don’t like regrets or nostalgia.
Erik K: That humans are not capable of loving their neighbor. Hence the conflicts, the injustices, the wars.

Color or B&W?
Lea Lund: Both, with a strong preference for B&W.
Erik K: Both. The image is self-evident in color or B&W.

What is the most photogenic city in your opinion?
Lea Lund: I can’t answer precisely, but I like the cities in Northern Europe.
Erik K: Rotterdam.

The image that represents for you the current state of the world?
Lea Lund: A pile of manure.
Erik K: Oil floating on water. There is no interpenetration. Positions are fixed. No flexibility on either side, that leads to rupture, and that is very dangerous!

What is missing in today’s world?
Lea Lund: Peace.
Erik K: The strength, humility and intelligence to ask yourself one question: “What if I was wrong?”

If you had to start over?
Lea Lund: Perhaps a peaceful life with Erik in a beautiful house in the middle of nature, surrounded by trees, animals, birds, streams, sun, wind, rain.
Erik K: The same, but with Lea!