Jean-Philippe Charbonnier : The death of a man 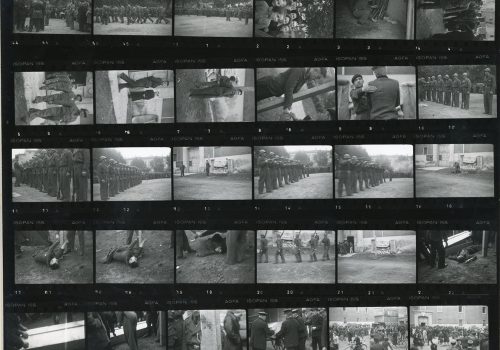 “In the small town of Vienne, Isère, in September 1944, a collaborator by the name of Nitard was sentenced to death. I had to photograph his execution. He was not a great spy, just a bugger who had worked as a jack-of-all-trade or secretary in the German administration, presumably for the Gestapo. But we have not forgotten that, in the first days of the Liberation, the excitement was violent against the collaborators, big or small. We also remembered that the really dangerous collaborators were not easy to catch and that the small fry often paid for their former bosses.

The Nazi executions of many great patriots, both in Lyon and in Vienne, had done nothing to appease the spirits. The resentment was such that, although Nitard’s appeal was accepted by the Grenoble Court of Justice, the execution was ordered and I cannot help thinking that it was largely to avoid disappointing the people of Vienne, the public. So that everyone in town had their share of the general revenge and a chance to witness the execution, it was scheduled for noon. Five thousand citizens, including the children in the front row, piled up on the platform in front of the old barracks. (…) Before the execution, the condemned man received the traditional and final glass of rum and cigarette. Standing in the barracks courtyard, surrounded by officials, F.F.I. and a few privileged onlookers, he swallowed his rum then lit his last cigarette.

Remember; it was at the time when tobacco was still severely rationed and, by force of habit, the future victim, after having taken five or six puffs of his cigarette, smashed the embers and put the butt in his pocket, as if hoping to finish this cigarette later. Then he went to face the execution platoon. He crossed a corridor against the wall of which twelve rifles were leaning and left on the median. To welcome him, a priest, the execution platoon and his officer, and the crowd, now strangely silent. This demonstration of public justice shocked me deeply. I deplore collaboration as much as anyone, but this punishment seemed disproportionate to the relatively minor crime of this man. My nerves were terribly tense as I stood so close to the one who was going to die. I do not remember whether, at that time, the crowd was silent or not. I only know that I set my Leica automatically, like in a dream or rather a nightmare. Unconscious reflexes made my old Summar F2 approach as close as possible to the condemned man; while I struggled with a deep feeling of disgust, suddenly I felt very close to this man, standing alone on this platform.

Injustice towards humanity, overwhelming feeling that the man was already dead, that he was like a duck with a severed head, which still runs a few minutes before falling. The man had died long before he entered this “arena”. Even after seventeen years, I have trouble finding another word.

The show reached its climax and suddenly we untied the man from the post. Since he was a traitor and the traitors are not allowed to see death coming up front, the seconds passed, while he was tied again, his back to the peloton. And the twelve rifles fired, including one blank. Nitard never saw me, although I was sometimes no more than five feet from him. When it was all over, I was white and shaken, I had shot the whole story, from cigarettes to vans on one single reel of 35mm film of 36 exposures. It was the biggest, most compact story I have ever “covered” and which I hope I never have to cover again. ”