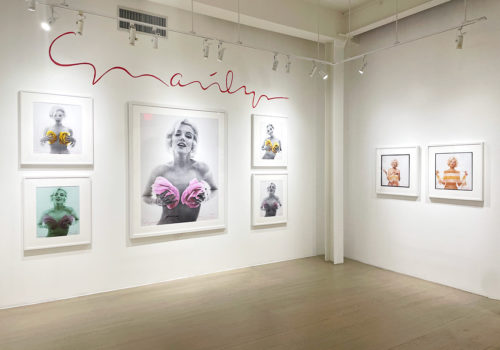 (…) That’s the story of Marilyn Monroe and the photographer. I go on, and she says ‘’…So long.’’ It’s the end of her career, and of her life, and in a sense it’s the beginning of mine.
It was right after that that my greatest success as a photographer began. The kid from Brooklyn who was content with a job, a girl, a car, and a camera-the successful but clean-cut professional of 1962, was soon to metamorphose into the frenetic emperor of a seven-story studio where often ad and fashion shootings had to be set up simultaneously, where TV commercials were produced, and a small silk screen factory was turning out limited editions of my work daily.
The sixties were to be the best and craziest decade, not only of America’s life but of mine. Those were the years of the jukebox, and the big sound, and the big bucks, and the swimming pool, and the three children, and the townhouse, and the houseboy, the black library with the Picasso over the door, Dr. Feelgood, and the crystal blue Stingray, airplane trips to Fire Island, and the fantasy house with the wishing well, the herb garden, and the eight- foot-tall roses Allegra grew while I photographed American beauties in New York.
In 1962 I had these years of success and excitement still ahead of me and I also had yet to make my grandest mistakes. In a sense the taking of Marilyn’s pictures was only a forewarning of things to come.
I know that in some way her spirit has been around me since then. Her pictures cut through a lot of obstacles on my way up and they got me out of some rough waters when I was down.
And as the years went by I noticed that the pictures we made together belonged to everybody. What I’d had done was bigger than me. In one way or another they’ve passed out of my hands and into everyone’s dreams. Some of the negatives have been lost or stolen. A whole envelope full of color transparencies was taken from my apartment in a robbery, and they reappeared on a construction site…where else but in Brooklyn? Marilyn peeks out from behind a scarf in the window of almost every poster and litho store.
So the pictures are everywhere. Marilyn is everywhere. But there is no Marilyn. She’s gone. Marilyn was, as she said herself, a sex symbol. She died young and remains eternally young, a symbol preserved by death.
There have been many beautiful women since Marilyn Monroe. But who is there that has her total magic?
Nobody has that vulnerability anymore. We turn to child models in an instinctive search for that innocence and freshness, but they don’t have the deep feminine sexuality that came from Marilyn like light.
Marilyn Monroe is the first American goddess-our goddess of love. We created her just as much as she created herself. She arose in response to our sexual yearning and our spiritual awakening. She is gone, but she is everywhere. Stars die, but light goes on forever.
Through the magic of photography, the light from Marilyn Monroe is still reaching us, still drawing us on, like moths to a flame.