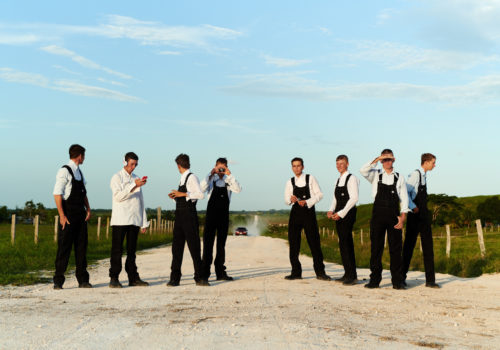 c.1950 documents the Mennonites of Belize. Initially in search of a place to practice their traditions freely, the community have made the country their home for the last 70 years.

The sun was high, and the jungle was in flames when we turned down a gravel road. As we approached the fire, a few of the men were burning the forest, clearing land for future families. Amidst this blaze was the first time I saw them.

In the distance, homesteads dotted the lush green hills; in each of these a family had their slice of paradise. The landscape recalled the simple agricultural society of the American midwest in the 1950s: a placid utopia frozen in time, sprung from the seeds past generations had planted.

As dusk approached, the pastor of the first village gave me permission to photograph the community’s families. I was struck by the near-silence of the land, only interrupted by the sound of horses’ hooves and wooden wheels.

These buggies were often driven by young children with surprising authority.

The young here are given responsibility at an early age, not only in the home but in society as a whole.

The family is organised around labour, with the men working in the field and workshops: repairing farming equipment and machinery; and the women and younger children run the household, preparing meals, feeding the animals, and mending clothes.

The scene is not absent from modern intrusions. On Sundays, when the kids are allowed, they listen to reggaeton on a small speaker. Other community members drink Coca Cola daily, and the odd click off of a camera or glow of a cell phone are not entirely out of the ordinary.

Despite modern nuances, family and tradition bind this community, and their way of life is richly preserved. Their simple vision of society provides the rest of us with a mirror: one is left marvelling more at the pace our own lives are changing rather than how theirs stays the same. I hope that c.1950 reminds us that it’s humans who make their social world based on a shared vision, and another one is always possible.