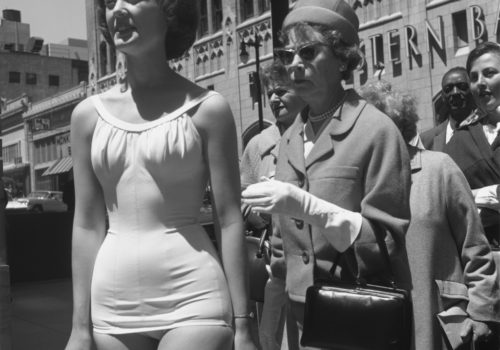 I met Arthur Tress for the first time in the late 1970s, in Arles. He was a very close friend of the French novelist Michel Tournier. They shared a passion for the absurd and nonsense in Lewis Carroll’s work. Arthur was much better known at the time, but has since been  forgotten, which is a pity.
He still lives on the West Coast. This month, an exhibition devoted to his work is held in San Anselmo, CA.
Jean-Jacques Naudet

Smith Andersen North presents until January 23rd, 2016 Arthur Tress, San Francisco 1964. This is Tress’s first exhibition with the gallery, and only the second major exhibition of his early San Francisco work in the Bay Area. Best known for his staged, surrealistic tableaux of the 1970s, the rediscovery of Tress’s early work has shed new light, not only on the career of an innovative American photographer, but on San Francisco in the mid-1960s.

In 2009, when Tress was clearing out a closet in his sister Madeleine’s San Francisco apartment, he stumbled upon a box of old prints and negatives that he made in the summer of 1964, when he was 23 years old. The young Tress had just traveled by bus from Mexico City to stay with his sister, who supported and encouraged his interest in photography; he spent the next four months photographing the city with his Rolleiflex camera.

It proved to be an opportune moment. In the summer of 1964, several major events converged in San Francisco, setting off a wave of protests, parades, and rallies that catapulted the city to center stage of the country’s escalating culture clash. The twenty-eighth Republican National Convention (the “Goldwater Convention”) was held at Cow Palace that summer, along with the launch of The Beatles’ first North American tour just a month later. Discriminatory hiring practices at car dealerships along Van Ness Avenue brought on a series of protests and sit-ins, making San Francisco a hotbed of civil rights activity. Tress placed himself in the middle of it all, capturing the players, the spectators, and those caught somewhere in between–fellow witnesses to a cultural moment that had yet to define itself.

When not in the center of chaos, Tress wandered what he later referred to as “a city of alleys”, gazing into shop windows and finding his subjects in the dustier corners of town. He says of his early portraits, “They were kind of frozen in the very beautiful Northern California light. Almost like a stage set.” He occasionally interacted with people, but most often took candid shots with a keen eye for odd juxtapositions that crystallized the city’s unique eccentricities. The slightly surreal quality of his portraits, shop windows and hand painted signs was a harbinger of the work he would become known for later on in his career. Tress told the SF Gate, “After 50 years of photographing, I no longer see the difference between staged and spontaneous or found photography. It’s all a projection of the photographer’s mind. He kind of creates a matrix of what he’s going to find in his hunt. And so the world conforms to what he’s expecting and wants. And it’s an amazing thing.”

Tress developed and printed his negatives in a communal darkroom in the city’s Castro district before leaving San Francisco in the fall. The prints were stored in his sister’s home, where they remained untouched, like a time capsule, for the next 45 years. The discovery inspired the photographer to revisit his early negatives.