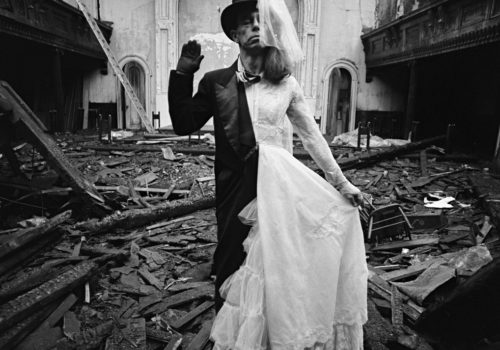 We don’t talk enough about the Museum of Photography in Thessaloniki, which, under the direction of Vangelis Ioakeimidis, never fails to impress. On view currently is a large retrospective of Arthur Tress. The exhibition is a surrealist labyrinth, featuring a selction of  145 pieces from the entire photographer’s career, beginning when he was 16.

Even in his early work, his street photographs shot from the center of the street, he liked to point out the sadly absurd  possibilities of reality, those, whether staged or not, born from visual coincidences and the collective imagination. The reality he captures is not always a sad one. There’s a fantastic side as well. His photographs are like minor tragedies. This is reality staged within reality, and in both cases Tress defines what reality is.

Scene 1: A policeman on horseback overlooks the object of the offense: a tricycle, whose 3-year old owner is probably already in handcuffs.

Scene 2: A woman sit on a wall, anxious, an extension of the coin-operated binoculars behind her. They look like two metal people. She has round black sunglasses and a pale complexion. She could be a member of their family.

Scene 3: A pimple-faced teenager with sunglasses holds his quiet trophy towards the lens: a motionless duck. He wears a colander like a crown. Behind him is a damp mist that could carry him off at any moment.

Scene 4: In a dining room with a double mirror, a couple eats breakfast. The octogenarian butler could be the husband. Sitting at the table where the wife might be  a bearded man in his twenties who could be their grandson. He’s trying to rouse himself with a cup of tea.

“Everybody was happy in that circus and there was nothing natural about it. The clown walked the tightrope in perfect security, in ten days I didn’t see him fall once, and even if he’d fallen I knew he couldn’t hurt himself. It was really different, see. I was so happy I wanted to die, because you’ve got to grab happiness when it’s there,” says the little orphaned Arab in Romain Gary’s novel The Life Before Us.

We find this life-and-death urgency in Tress’s visual poetry. Opposites merge strangely, as in the photograph of a sullen couple walking down the aisle in one body—a wedding dress on the right side, a tuxedo on the left—in a gutted-out church. Gradually the photographs, the theatre comes together and each short piece is variation on “melancholic alienation.” The phrase, attributed to Arthur Tress, is taken from the press release. It describes the result, perverse for the victims, of the oppression of minorities. Looking at the pictures, we understand it entirely.