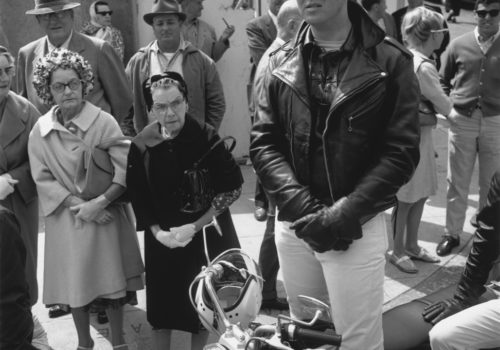 In the summer of 1964, San Francisco was ground zero for a historic culture clash as the site of both the 28th Republican National Convention (the “Goldwater Convention”) and the launch of the Beatles’ first North American tour. The young photographer Arthur Tress arrived at this opportune moment in the city’s history and found himself in the midst of large-scale civil rights demonstrations and chaotic political pageantry. With a unique sensibility perfectly attuned to this quirky metropolis, he set about to capture the odd spectacle of San Francisco.

Over 70 photographs included in Arthur Tress: San Francisco1964 range from public gatherings to impromptu street portraits, views of the peculiar contents of shop windows and commercial signs. This is the first museum exhibition of a virtually unknown body of Tress’s early work. Curator James Ganz explains, “This exhibition offers an evocative time capsule of the City by the Bay and makes a fascinating contribution to the region’s rich photographic legacy.”

The subject matter of Arthur Tress: San Francisco 1964 breaks down into three broad categories: public gatherings, including civil rights and political rallies; portrait studies of San Franciscans; and views of shop windows, commercial signs and architectural fragments. Often these categories overlap. In photographing events such as the Auto Row demonstrations, Tress was interested in recording passive bystanders, as well as active participants. His candid images of spectators lining the streets of San Francisco, whether isolated or in groups, capture the distinctive fashions, expressions, and body language of the era. The frequent incursions of commercial logos and signage add to the contemporary flavor of the photographs, effectively fixing time and place.

The exhibition captures the flavor of San Francisco without featuring its most familiar monuments. Tress’s approach to the city was idiosyncratic, generally avoiding popular tourist sites such as the Golden Gate Bridge and Chinatown, while favoring mundane locales like laundromats and coffee shops. Ganz observes, “Tress is a photographer of people rather than landmarks. Given the option of pointing his lens at an attraction like Coit Tower or at a tourist observing the monument, he will always favor the human element over the architectural setting.”

Arthur Tress: San Francisco 1964 is a striking volume highlighting prints as well as an assortment of contact sheets and archival materials selected in close collaboration with the artist. Featuring an insightful introduction by exhibition curator James A. Ganz and a conversation with the artist, the book is a remarkable document of the time and place in which the photographs were made, and a work of art unto itself. The catalogue is published with the assistance of the Andrew W. Mellon Foundation Endowment for Publications.