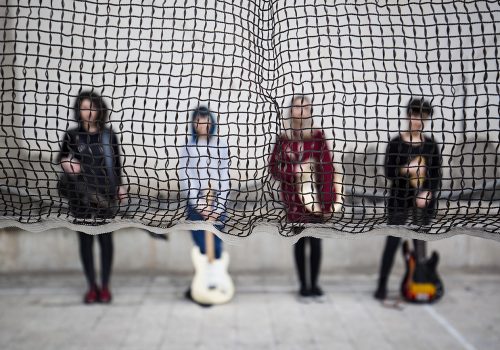 Sandra Reinflet won the Roger Pic Award 2020, here is her text on her series VoiE.X, artists under constraints.

How can one live as a painter, dancer, director or poet under Iranian theocracy, Brazilian conservatism, in the Mauritanian desert, the Papuan jungle or Malagasy misery?

How to make art a profession when it is the last priority of the government, when no distribution structure exists or when it is muzzled by censorship?

This long-term series offers portraits of artists who pose the act of creation as an act of resistance in contexts where making a living out of art is a challenge.

The VoiE.X project was born in Mauritania, when I discovered that in this Islamic Republic, there were no cinema, few stages and places of exhibition, no publisher, distributor, and that the religion classified the art forms between those which are H’ram (contrary to Islam) and the others. As an artist, I wondered where the vocation comes from in such contexts.

In France, while we enjoy relative freedom, it is already difficult to make a living from creation, so when an artist has no model, no support, no means to share his work in his country, hence share the spark? How do you decide to devote yourself to art when the prospect seems blocked?

To find some answers, I went to Iran, Papua New Guinea, Madagascar and recently to Brazil in order to build bridges between these creators who, despite different situations, have a lot in common. Since it is complex to create, artists become resilient, then resistant.

Thus, in Iran, where women’s dancing is prohibited in public, we speak of “harmonious movement” to be able to move on stage. In Brazil, still under the shock of the new ultra-conservative government policy, artists contest in sub-texts, in the spaces between shows, the discrimination they suffer because of their sexual orientation, their skin color or the stance they take. They create on the knife edge, playing with the forbidden and the possible, to make their voices heard.

As the details are hidden as much in the vanishing lines as in those of the face, each portrait is taken at a wide angle, in a staging co-created with the artist, a metaphor for the place he/she occupies in his/her landscape. Together, we tried to sketch an intimate geography where the subject and his environment are linked, willingly or by force.

Far from being miserable, these portraits suggest that coercion is not an insurmountable wall, but an incitement to circumvent, even divert, in any case to act.

This is about necessity, going beyond limits, defending freedom of expression, and basically just freedom. In these constrained times, don’t we, more than ever, need these torchbearers?

Provided that this exhibition serves as a megaphone. Poetry is a weapon of mass construction, thanks to them for reminding us.

When it comes to declining a profession, Sandra Reinflet hazards: Inventor of true stories. This great traveler uses photography and text to stage reality – assuming that everything is fiction when you choose a setting.

She has notably published four books (including Do not speak to strangers, published in 2017 by JC Lattès editions) and received the “Coup de cœur” prize from the Reportage Talent Exchange for her photo series entitled “Who killed Jacques Prévert? »(Editions de La Martinière).

From Port Moresby to Saint-Denis, she also carries out many cultural actions to amplify the voices of those who are not heard, or not enough.