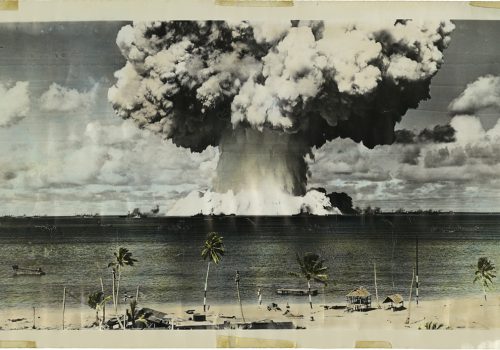 As part of the Photobiennale-2020 the Multimedia Art Museum, Moscow presents the exhibition Certain Disorder. Works from the Antoine de Galbert Collection.

Antoine de Galbert is a major French collector and philanthropist, founder of the legendary Parisian art centre Maison Rouge (Red House), where for more than 15 years some of the most interesting exhibitions took place, going beyond accepted paradigms of the curatorial approach. This was a venue that exhibited contemporary art and art brut, where the classics were shown and new names discovered. The exhibition activities of Maison Rouge were based on the vast collection of Antoine de Galbert and other private collectors, as well as museum collections. During the 15 years of its existence Maison Rouge became one of the most important hubs, concentrating the intellectual energy of Paris.

The exhibition ‘Certain Disorder. Works from the Antoine de Galbert Collection’ is a continuation of the ‘Private Collections in the Museum’ programme at MAMM. The choice of exhibits and the structure explicate the complex and subtle psychological mechanisms that determine the collector’s selective process for including a particular work in the collection.

This exposition based on the photography section of Antoine de Galbert’s collection was specially prepared for the Moscow ‘Photobiennale-2020’. It features images from the most influential photographers and artists that use photography as a medium in their work, as well as pictures from unknown authors and young artists who are just entering the world of art.

‘For more than 30 years I have been collecting works from various genres: art brut, folk art, primitivism, modernism, contemporary art,’ writes Antoine de Galbert. ‘Many were displayed in the showrooms of my foundation La Maison Rouge or at other exhibitions in France and abroad. The works in my collection have also been presented as independent museum projects. Their titles such as “So Be It” (Ainsi soit-il), “Voyage in My Head” (Voyage dans ma tête), “My Paris” (Mon Paris), “A Hundred Portraits” (Cent portraits), “Memories of a Journey” (Souvenirs de voyage) or “Headdresses from around the World” (Le monde en tête) are an expression of collecting as a way of life, an exciting journey and an adventure.

The idea of creating and showcasing the project “Certain Disorder” at MAMM came from Olga Sviblova. She suggested that the exhibition should focus exclusively on photographic works, although my collection includes images from very different types of art and media. Not being a professional expert, I tend to purchase photographs based on their message or their relevance to the topics that concern me above all. Criteria such as the uniqueness of a photo print or its role in the history of photography are secondary for me.

The exhibits are arranged according to different themes and subject matter: starry nights, faces, views, madness, the body, death… They all raise questions about the future of man, the fate of man, and his place in the world. And they refer to the complexity and ambiguity of human existence, revealing the darker aspects, the contradictions.

The date of these works covers a significant period of time: from the era of the invention of photography (Guillaume Duchenne de Boulogne, 1856) to the present day (Mari Katayama and many others). There are famous authors and also those whose names will be a revelation for many. All this is a consequence of the fact that I purchase the works I really like, not those I “need” to buy.

For private collectors, finding pieces that reflect their dreams, fantasies or fears always involves a journey, both mental and geographic. It takes place on a territory so endless that a meeting with “your” artwork becomes a matter of chance and luck.

If the collector is not chasing after fashion and hot topics, his collection will be a combination of the rare successful finds with gaps from the failed meetings that so often happen in life. A collection is a chaotic assembly of the memories brought back from your travels.

Unless we are talking about a collection of samovars, a private collection always gives the impression of a certain disorder. But there is also a sense of unity, manifest in the image of the collector himself and invisibly reflected in his collection.’

The section on the irrational side of human nature opens with photographic portraits of Antonin Artaud by Man Ray (1926) and Denise Colomb (1947). Artaud was a French writer, poet, playwright, actor, director and theatre theorist who dedicated his life and work to the question of a new justification for art, its place in the world and right to exist. Artaud developed his own concept of drama, the Theatre of Cruelty. His theatre took the audience from their everyday emotional equilibrium and penetrated the subconscious, revealing the primordial cruelty of human existence. States that go beyond the boundaries of the rational are explored in the works of Eugene Smith, Agnès Geoffray, Anders Petersen, Boris Mikhailov and Christian Fogarolli, whose photographic series is based on the archives of an Italian psychiatric clinic.

Just as an individual tries to perceive the depths of his subconscious, he also seeks to understand the Universe. The ‘Cosmic’ part of the exhibition includes both scientific photography and art projects, ranging from the ‘Atlas of the Northern Milky Way’ (1934) by American astronomer Frank Elmore Ross, after whom thousands of celestial bodies are named, to the project ‘Les etoiles pures’ (Pure Stars) by French artist Juliette Agnel, whose works ranked among the most striking discoveries at the Rencontres d’Arles International Photography Festival in 2017.

A clash between the sublime and the low is a technique used by the two other artists presented in this section. To create the ‘Blind Gestures’ project Belgian-based Nicolás Lamas scanned the dead screen of an iPad, ‘revealing’ scratches, fingerprints and dust on the surface, which formed the semblance of an astronomical landscape against a deep black background. Spanish conceptual artist Joan Fontcuberta supplies each work in the ‘Constellations’ project with all the attributes of scientific astronomical photography (coordinates, exact time). But in fact they depict insects and dirt stuck to the windshield of the artist’s car. This ironic project, in which the dream of space is shattered like insects on a windshield, calls into question the credibility of photography as an undeniably truthful document and problematizes the relationship between appearance and reality.

In addition to knowledge of the surrounding world, man himself, through his creative act, creates an artificial landscape that becomes an integral part of his environment and the object of photographic research. This section includes the photographic work of the great sculptor Constantin Brancusi, who considered photography the ideal way to convey the ‘living’ dynamic aspect of his sculptures. Famous Japanese artist Hiroshi Sugimoto is represented by the work ‘Cambrian Period’ from his legendary series ‘Dioramas’. The artist has often repeated that all his life he never believed his eyes, being unsure that what he saw really existed: ‘I’ve spent my life shuttling between dreams and reality like that, forging an accommodation of sorts between the two states.’ Analysing his ‘Dioramas’ series, he wrote: ‘My camera could stop time in the dioramas – where time had already been stopped once – for a second time. Might killing something that was already dead bring it back to life? … When I am creating a “Diaroma” photograph I am not a mere spectator; I am a part of the unreal world of the diorama.’ New York in the photography of Walker Evans, the coal conveyor of Hilla Becher’s coal conveyor belt and the architectural shots by Dora Maar and Otto Wols develop the theme of artificial landscapes created by man.

The exhibition section devoted to the theme of self-identification through corporeality opens with a portrait of Henri Toulouse-Lautrec (1892). This part includes works by such artists as Erwin Wurm, Guillaume Treppoz, Istvàn Szirànyi, Gunther Brüs, Annie Leibovitz, Mari Katayama and others, demonstrating how different approaches to the topic of corporeality were actualised in different spheres of photography, whether scientific, applied or artistic. Interest in this topic reappears in art after the Second World War, and above all, among the Viennese actionists, to whom Gunther Brüs also belonged. Austrian conceptual artist Erwin Wurm ‘equips’ the human body with fantastic devices to increase its functionality. Mari Katayama, a participant in the main project of the 58th Venice Biennale, brings together the central lines of modern artistic discourse related to corporeality in her performance works.

In Russia the process of serious photography collection only began in the last few decades. We hope this exhibition will be of interest to everyone who loves the art of photography, and to those considering what principles may be used to build a private collection.