Peter Fetterman : The Power of Photography #1 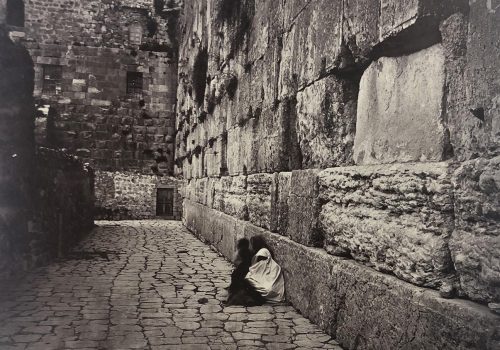 We received this email from Peter Fetterman, the gallery owner from Santa Monica:

“I have decided to curate a daily series of powerful, beautiful, hopeful images. I do not expect people will be buying any photos online now during these difficult times but I wanted to do it anyway.”

We liked the idea and the choice, so we turned it into a bi-monthly column.

Here is the first one!

THE POWER OF PHOTOGRAPHY

We are pleased to introduce a new online series called the Power of Photography highlighting hope, peace and love in the world. We invite you to enjoy and reflect on these works during this time. – Peter Fetterman

“Jerusalem has been, and is, the spiritual home to three major religions: Judaism, Christianity and Islam. To say it is a magical place is a great understatement.

I have seen and collected many images of The Holy Land but this recent acquisition is I think the greatest I have ever seen taken at this special place. I believe it to be a unique print. It is as if Irving Penn had been transported back in time.”

“Of course, “The Steerage” is one of the most celebrated images in the history of photography.
For good reason as its genius graphic construction and human empathy is utterly timeless. “

“Wynn Bullock, to my mind, is one the greatest 20th Century photographers. Often eclipsed by his more well known contemporaries, Edward Weston and Ansel Adams.

This is a haunting portrait of his mother’s hands taken in his modest house in Carmel in 1956. The beauty of the print just knocks me out and is the definition of the word “primal”.”

“Ansel Adams is justly celebrated for his epic depictions of majestic landscapes, but this rare, little discussed, haunting image of displaced children shows his profound empathy for humanity. Certainly on a par with, his close colleague Dorothea Lange’s, “Migrant Mother” but certainly no less powerful.”

“ was visiting our great friend and artist, Pentti Sammallahti, in Helsinki and I casually said to him, “Perhaps there is another great photographer in Finland I should meet?”

He made a telephone call and the next day he drove me for over 3 hours in the freezing cold through what seemed like at the time endless forests to meet his most favored student and protege, Kristopher.

We spent a delightful few hours all together and as we were talking and eating out of the corner of my eye I saw this gem of an image hanging on a discrete wall. I had to get up to look at it more closely. Then like a powerful Ali punch I was knocked out by it’s power and physical beauty.
A tender and loving portrait of his wife.

It remains, to this day, one of my all time favorite images. “

“Taking up photography at the age of 40 years old, urged on by her children as an antidote to her husband leaving to run the family plantations in India, Julia Margaret Cameron became the first great female photographer.

It is so hard to find her prints in such perfect condition as this one. I had collected several in the past in not so great a condition but it was always a dream to find a 10. My dream came true with this one and it just transports me to a special pace each time I look at it.”

‘March on Washington’ – Martin Luther King Jr. after delivering his, ‘I Have a Dream’ speech, Lincoln Memorial, Washington D.C., August 28, 1963

“Many years ago we mounted a Civil Rights Exhibition in the gallery, it was a subject that completely enveloped me.I knew we needed to have a great MLK image to anchor the exhibition and I subsequently spent months hunting and viewing hundreds of images. When I came across Dan Budnik’s understated work and met him I knew this was the one.”

“Bruce is one of the great Magnum photographers best known for his gritty urban work. This is a rare gem in his archive.

Full of wonderment, humanity and hope.”

“It was always Cartier-Bresson’s intention to become a painter as a young man. He studied intensely  with the celebrated teacher and Cubist painter Andre Lhote.

One can see the painterly influence on this key early image, “On The Banks of the Marne”. It is as if Seurat picked up a camera by mistake instead of his paint brushes. It’s simple joy and humanity and always puts a smile on my face.”

“Of course the Beatles have been much photographed but this has always been my favourite. Taken by the great David Bailey, a fellow East Ender. It’s more than about Paul Mccartney and John Lennon. It is so much more universal than that.

It is about friendship and creativity and shared history.”

Bande-annonce, The Pigozzi Collection in Cannes

Roger-Viollet Agency : We walked on ice !