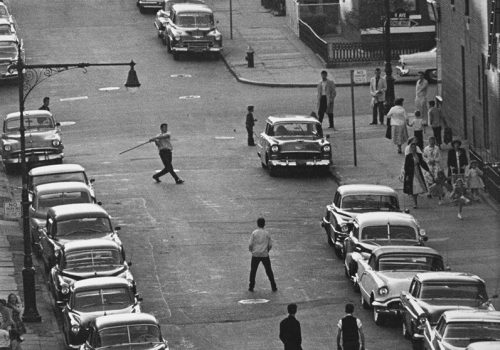 This is the fourth installment the new online series by Peter Fetterman Gallery called the Power of Photography highlighting hope, peace and love in the world. We invite you to enjoy and reflect on these works during this time.

“Bruce Davidson’s Sunday morning “Stickball” is like an elegant ballet. The cars have just been given their weekly wash and there is that wonderful leisurely feeling after a frantic week no doubt.

It’s a classic image capturing a community and spirit that we can only now look back on wistfully.
So much has changed now.”

“I enjoyed such a wonderful 20 year collaboration with Willy Ronis. Whenever I was in Paris I would take him to dinner.

One day I said I want to take you to the restaurant where you shot “Rue Muller”. We went there and the street hadn’t changed in over 60 years. I had booked the restaurant to give him his 100th birthday party but sadly he passed away at 99 and a half years, after a long and fulfilling life.

One of the greats for sure.”

“I really love exceptional portraits of artists. I can only dream of owning a Modigliani, Seurat, Picasso, O’Keeffe, Cassat, Agnes Martin, etc., but a great artist portrait is the next best thing.

Martha Holmes was an important Life Magazine photographer and this image of Jackson Pollock deservedly made the front cover when it was first published.”

“The history of Photography is full of examples of the Muse as Inspiration, think Alfred Steiglitz and Georgia O’Keeffe, Edward Weston and Charis Wilson, Harry Callahan and his wife Eleanor throughout their 63 year old marriage. But none is as powerful or poignant as René Groebli telling of his honeymoon in a simple, small Paris hotel as his “Eye of Love” series.

To my mind, it is the greatest love story ever told in still images. Now in his 93rd year, René is a source of constant inspiration. A true life force.”

“We have enjoyed a long and fruitful relationship with the great Mr. Erwitt, now in his 90’s. His wit, charm and intelligence manifest themselves in his images.

I love this rare gem in his body of work. Is the child thinking back on his life or thinking about his future?

That’s the mystery and power of the image that we will never know but feel for him as did the photographer.”

“When I am with Sabine as I was in November, I cannot believe I am sitting with a woman who is 96 years old. She is full of vigor and enthusiasm. She is the last living photographer from one of my favorite eras in the history of photography – The French Humanist Post War period – which gave us Boubat, Doisneau and Ronis.

I remember witnessing an incredible sight. She was only 91 years old at the time and was being honored with a big exhibition in Paris and there was a special book signing event which I think was originally scheduled for one hour at noon. There were literally crowds around the block with hundreds waiting to have their books signed and personalized. It went on for five hours and Sabine was patient, courteous and focused on everyone who was lucky to be in her presence.

That is what makes a great photographer.”

“I think John Szarkowski had one of the greatest minds I have ever encountered. Beyond articulate and intelligent, his early writings, especially his classic book “Looking at Photographs,” nurtured my interest in photography.

Revered as one of the greatest curators of photography ever he was also an incredible photographer and printmaker in his own right. Every Monday morning he would bring in apples from his cherished trees which you see here to his staff at the Museum of Modern Art New York.

I had the great honour of hosting the last public exhibition of his work. The week he was with us in California still fills me with such beautiful memories of great meals and conversations. Sadly, he passed away a few weeks after the exhibition opened.”

“One day whilst visiting Henri in Paris in his apartment, I brought with me one of my favorite books of his – the long out-of-print, “The People of Moscow“ which I thought was full of unknown ‘gems’.
I pointed to this image of the gymnasts and asked, “Henri, I love this photograph…why have you never made a signed collector print of this image? I think it is very strong.” “Well Peter” he replied, “No one has ever asked.”

I asked him would he be willing to make three prints for me. “If you insist, I will oblige.” And so it went on over many years.

My favourite images of his have always been the ones I had never seen prints of before.”

“This is the most autobiographical photograph I have ever collected. I was born in the East End of London into a very modest background to say the least. My parents had both left school at 13 years old. I always dreamed that outside our tiny apartment there was a bigger world to explore. Every Saturday morning I used to take myself on the tube “Up West” to Central London and Charing Cross Road depicted here where there were rows and rows of second hand bookstores where, for literally pennies, I could find second hand books to feed my curiosity plus a second hand jazz record store called Dobells where I could listen to jazz records for hours that I could not afford to buy. This was my weekly ritual and Charing Cross Road became my cultural nirvana.

Flash forward, I see this image about thirty years ago and wham that was it and I met its creator – Wolf Suschitzky. On every trip back to London I would visit Wolf in his little appartment. He was a gentleman from the “old Middle European School.” We had our own special ritual. He would brew me the greatest Viennese coffee and there would always be the most delicious apple strudel to accompany it. And then we would talk for hours and look through his archives. I always discovered something new and special there. I thought he was such a truly great and under-appreciated photographer and promoting his work became my “Mission,” to secure him the recognition I felt he deserved. It still is…He passed away at 104 years old and to be honest there is not a day I don’t think about him as I live surrounded by his work.”

“Eve Arnold was one of the great Magnum Photographers.

She lived on one of my favourite streets in London, Mount Street, near the Royal butcher.

She was so intelligent and feisty. I asked her to make me this little known image of Paul Newman in the Actors Studio. I love movies and especially the great Newman movies like “Hud,” “The Hustler,” “Butch Cassidy,” “The Sting,” “The Verdict” and so many more.

You can tell from his presence in this class that he would certainly be destined for something great.”