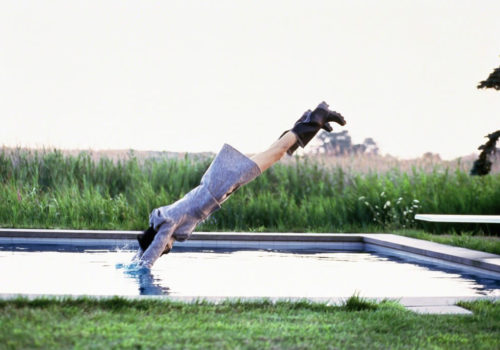 This is the 22nd installment of the online series by Peter Fetterman Gallery called the Power of Photography highlighting hope, peace and love in the world. We invite you to enjoy and reflect on these works during this time.

Well Arthur certainly got the shot this day. This was a last minute “gift” from the photo gods. The shoot was for Vogue styled by the great Grace Coddington for warm, heavy tweeds. The fashion world has it’s own cycle and this was for a winter collection but had to be shot at the height of summer. It was an incredibly hot day, the shoot was challenging, everyone was somewhat exhausted by the end of the day not the least the patient model Stella Tennant. As everyone was about to call it a day Tennant suggested she dive into the pool with her clothes and wellie boots on to cool off. Elgort and Coddington immediately saw this could indeed be a special unplanned for opportunity. This was a one shot gamble. Stella dived in and the rest is as they say fashion photography history. It is imbued with Elgort’s typical loose, freedom of style and “joie de vivre.”

In a long and illustrious career, 1967 was a very special year for Irving Penn. It was the year he went to Dahomey (now Benin) for Vogue. This portrait of Dahomey children is one of the most successful in the series. Using a purposely built portable studio Penn went about with his usual meticulous approach.

As he said, “I posed them physically and directed their attention by gesture. They were hypnotized by the camera. I adored them and they knew it. They presented themselves to me and to each exposure of film in fullest confidence.”

In the hands of a journeyman practitioner it would just be a photographic record but Penn turns it into a work of art enhanced by the use of the platinum print process of which he was a true master. He dedicated many hours to the production of each print by hand-placing the negative and emulsion coated paper in direct contact with each other. This would result in warm, rusty hues. Then Penn went on to apply chemicals directly onto the image with a brush resulting in a tonally rich masterpiece.

The print is stunningly beautiful and tender and very, very moving. Worthy of its subject matter.

Lillian had a long and wonderful creative life. We worked closely together for over 20 years and I was honored to present her first West Coast Exhibition. Her talent allowed her to break through the “boy’s club” of fashion photography. She was never the total careerist like Penn or Avedon were but was equally gifted and they were all friends and colleagues albeit competitive. But she was also the devoted mother to bringing up two young children and balancing a successful day job with those duties, no mean feat back then and now.

What she often told me was that there was always a difference when a woman was photographing a model than when a man was. Gone was the performance aspect of the model trying to seduce the photographer and in its place was this special “connection.”

Her models seem “real” and relaxed as opposed to being somewhat objectified. Lillian talked to them about their husbands, boyfriends, lovers, children. They opened up to her. They became “natural” in their beauty in front of her lens and it shows.

I can relate to Gianni’s simple words about photography being the way he has really learnt everything about life and culture through it. It has taught me so much and it never stops teaching me. Each encounter with a new great image is an adventure.

On the surface this photograph seems so simple. A little girl in her white Communion dress running in Florence. But it is so much more than that. It is a new beginning, a new sense of freedom and a new journey full of hope.

Sebastião once again bore witness for all of us in the early 1990’s to one of the most devastating acts of destructions ever seen in the 20th Century. There are acts of natural disaster that no one can predict and control and then there are premeditated human acts of disaster. This one was Saddam Hussein’s farewell gesture to the world and his perceived enemies. He created hell on earth in blowing up close to 600 oil fields.

The images Sebastião produced are shocking and astounding unlike any others I have seen. For me, despite the horror depicted, there is some small affirmation in them as they display the heroic efforts of a group of people, the skilled firefighters mainly from Canada and Houston, who risked their lives to contain it.

This is a moment in fashion history, beautifully captured by the ever youthful 96 year old Sabine Weiss. Christian Dior had recently passed away, but the show must go on. His successor is the incredibly young and thin Yves Saint Laurent with the mantle of history on his shoulders. Under a lot of pressure to make his own mark his creativity comes through for him. He comes up with this brilliant idea of the ’Trapeze Line” based on the flaring shape of a trapezoid, standing jauntily away from the body, his own version of the waistless dress but still firmly in the Dior tradition. It is so well received by the critics and the buyers and is the true “hit” of the season and firmly established him not only as the rightful heir to Dior but as a major new talent himself. It was shot outside the House of Dior headquarters, 30 Ave de Montaigne.

Even the dog is beautifully dressed as well as the elegant doorman not to mention the glorious red umbrella, a wonderful additional touch. Pure 50’s magic.

I love Joni Mitchell and this is my favorite song of hers. It’s a sensation I think a lot of us feel right now. Oh to just be able to skate away from all the current issues we are all dealing with.

Joel Bernstein is a brilliant photographer and has created some of the most iconic music images ever of musicians such as Springsteen, Neil Young and Graham Nash. He was somewhat of a child prodigy and first photographed Joni when he was 15 years old. He first heard Joni perform this song “River” at a concert in November 1969 within days of her composing it. The power of the lyrics immediately suggested to him a black and white photo of her dressed in black skating down a frozen river looking back over her shoulder. It was a dream that could not be realized at the time.
Flash forward Joel is on tour with Joni. The tour ends abruptly in Madison, Wisconsin. They have a little time on their hands after a frantic schedule. They are sitting together in the hotel restaurant while a blizzard is swirling over the frozen lake outside. Joel convinces her to finally fulfill his vision and to “Carpe Diem.” Music and photo history are made. The images were used in the gatefold for her celebrated album “Hejira.”

The images became an embodiment of Joni’s spirit and the eternal beauty of her music and the power of photography to evoke such a primal emotion.

This is an image steeped in history. It could almost have been taken in the 19th Century by one of the great pioneers of early travel photography like Samuel Bourne or John Murray. In itself it is a historical document. These old steams engines have themselves now disappeared, replaced by electric trains in the rush to modernize contemporary India.

But it has true grandeur and a testament to Steve’s magical eye as he juxtaposes the majesty of the Taj Mahal with it’s shimmering white curves in the early morning warm tones of the rising sun against the colossal black rusting steam engine symbolising the end of an era and the beginning of a new one. And of course the red pagri completes the composition.