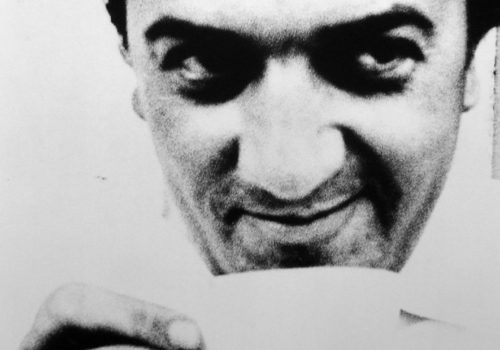 This is the twentieth installment of the online series by Peter Fetterman Gallery called the Power of Photography highlighting hope, peace and love in the world. We invite you to enjoy and reflect on these works during this time.

If you love Rome, you love Fellini’s films and who doesn’t? And if you love coffee this might be the perfect image to transport you.

William Klein is one of the great iconoclast 20th Century photographers. He is a one of a kind and there will never be another like him. Fellini is the same. Who else could ever create such unforgettable cinema as “La Strada”, “8 I/2”, “La Dolce Vita”, “Juliet of the Spirits”, “Fellini’s Roma”, “And the Ship Sails On” and so many other classics
.
They were destined to meet. Klein went to live in Paris after he had created his first amazing book “Life is good and good for you in New York”. He knew Fellini was visiting Paris, he found the hotel where Federico was staying, calls him cold and asks to meet. Fellini asks him around. Klein presents his book to him “I already have it. It’s by my bedside.” They connect and Fellini asks him to come to Rome to be his assistant on his upcoming film “Nights of Cabiria.” Klein has no clue what being an assistant means. Fellini tells him “If I am sick, you shoot.”

He joins him in Rome and the film is delayed. Needing something to do he goes out into the city full force. As Bill says,
“How could I make photographic sense out of a city that I barely knew and where I hardly spoke the language? But that’s the problem with photography in general. I was willing to take a shot……I soon found out that the Romans reacted to the camera much like the New Yorkers. Everyone felt that they deserved to be photographed, immortalized.”

Whilst he was there I think he created some of his greatest images and echoes in his achievements my favorite words of Fellini,
“There is no end. There is no beginning. There is only the infinite passion of Life.”

As we are no longer able to travel safely at the moment, the memories of those of us filled with wanderlust come flooding back. Who can ever forget the joy and beauty that being in Tuscany gave us? Its historic cities, art-filled museums, medieval hill towns not to mention its beautiful countryside.

Gianni’s deeply simple but moving image immediately transports us back there. He realized early on in his career that to best photograph a landscape one must keep a certain distance and observe from a certain height to take it all in.

Most of the great landscape imagery created in the history of photography is for the most part devoid of people. Think Ansel Adams. But Gianni being the great humanist photographer that he is often integrates the human story, the human relationship within his frame. It is easy to imagine ourselves walking up the elegant winding road between the cypresses surrounded by land that has been there for centuries before we arrived there and will be there for centuries after we leave.

Willy was one of the most gentle, intelligent and compassionate photographers I was honored to work with. He had lived a rich life not without its disappointments and tragedies. His dream as a young man was to be a composer but gave it up after his father died to support his family by taking over his portrait studio. He had a long career as a working photojournalist falling in and out of fashion with much struggles in between. But he never lost his passion for life and the ordinary moments of joy he captured through his personal work.

This image always held a place of pride in his studio. I always looked forward to seeing it and him every time I was in Paris and during our regular lunches over our 20 year friendship.

Colin Jones initially trained as a ballet dancer then did a 360 degree turn around and became a photographer. When he was younger he had a particular interest in portraying the industrial landscapes of the North of England and the working class communities he related to. He understood the harshness of everyday life for people working in heavy industries that were in decline especially the steel workers, coal miners, shipbuilders and dockers. Their lives had shaped these regions since the industrial revolution but Colin sensed their way of life would soon be gone forever and he wanted to capture it.

The photograph of the man bicycling to work was taken in the early morning, when the mist of clouds intermingled with the steam from the trains on the adjacent railway lines and the pollution from the tall chimneys of the steel works in the distance. These were the last of the steam trains that ran on a dedicated line that brought coal directly from the mines to power the steelworks.
Although this photograph was shot in England one can see similar patterns taking place in many other changing industrial countries in Europe and here in the United States.

Whenever I am feeling a bit down and need a little boost I just listen to this Bowie song, my favorite of his and I feel better and energized. Of course growing up in England at the same time, his music was pretty impactful. Who can ever forget the time they first listened to “The Rise and Fall of Ziggy Stardust and the Spiders from Mars”?

His was one of the most original voices in rock history. He added new meaning to the word “Reinvention” constantly changing and fearless in his creativity.

Andrew Kent has one of the greatest bodies of work on him. In 1975 he landed the “gig” of a lifetime. He had been entrusted by Bowie to document with complete access his world tour. Amazing images from Berlin, Paris, New York, London, Helsinki and Russia.

A few years ago whilst exhibiting at an art fair in New York in walks David Bowie into the booth. He was beyond cool, friendly, articulate and curious and asked such interesting questions. As he once said,
“I suppose for me as an artist it wasn’t always just about expressing my work. I really wanted, more than anything else, to contribute in some way to the culture that I was living in. It just seemed like a challenge to move it a little bit towards the way I thought it might be interesting to go.”

Well he certainly did that and so much more.

This is one of the most revered images in the history of fashion photography. Easy to see why.
Enfant terrible William Klein and total maverick shot it for French Vogue in 1960 in Rome. He was always pushing barriers. That was ingrained into his DNA and personality. He liked to poke fun at the artificiality and snobbishness of the fashion world and later made a feature film “Who are you Polly Magoo?” that did just that.

This was his vision for this shot. Two models in black and white dresses passing one another on the Piazza di Spagna, the stripes of the model’s dresses echoing the stripes of the pedestrian crossing. He asked them to walk back and forth and do double takes reacting to the identical dress the other was wearing. Bill was shooting with a telephoto lens. It started off pretty well but then havoc started to occur. People began to stop and stare and the traffic surrounding the square came to a virtual stand still. I once tried to drive in Rome and have been shell shocked ever since. The two un-chaperoned models began to attract unwanted attention from lots of hot-blooded Roman men who may have mistaken them for high end escorts. The Vogue stylist was tearing her hair out fearing for the safety of the models and the shoot had to be shut down because of all the chaos erupting everywhere but not before Klein got his legendary shot.

The famous models Simone D’Aillencourt and Nina de Voogt lived to fight many other days with Klein and all the other great photographers they got to collaborate with. All in a day’s work right?

1946 was an important year for Elliott. This was the year that this image was taken which is generally acknowledged to be his break through dog photo. On assignment for a fashion shoot for footwear, Elliott’s genius was to realize that any image would be much more interesting if it were shot from the dog’s point of view.

His further private adventures in this arena continue to bring him much acclaim and new admirers.
They are hard to resist. Many have tried to follow in his dog path but have never come close to his insight or charm.

When you are standing next to a Sarah Moon photograph you are immediately transported into a landscape of beauty and dreams. Her ethereal style is unique in its delicacy and in its subtle but powerful emotions they elicit. She invites us on a journey that is both inspiring and revealing. It is a world, to be honest, that I never want to leave. A world full of small miracles that only a supreme artist can reveal.