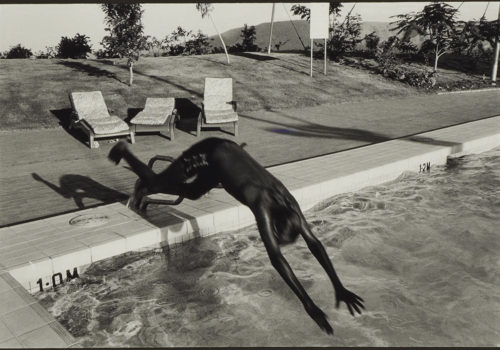 The exhibition “My Trip” exemplifies the diverse approach artists take in combining photography and travel. In this show three very different Australian photographers, all born in the 1940s – Max Pam, Micky Allan and Jon Rhodes – reaffirm how personal interests direct artistic vision and how one’s eye can capture moments another will be blind to.

Max Pam began his lifelong love affair with photography in the late 1960s taking the ‘hippie trail’ through India to London, and escaping the conservatism that defined suburban Melbourne at that time. A self-claimed ‘super tourist,’ for the past 40 years he’s continued to travel and take pictures returning to Asia multiple times.

Photography for Pam has been a “great get out of jail free card” and has allowed him the freedom to roam. “My main function as a person was to be there, to travel, to comprehend and join in the osmosis with the many and unique cultures I passed through,” he says of his early travels in Asia. “I had no formal notion of myself as a photographer. There were no assignments. The printed media and I had no relationship. As for my pictures I considered them to be part of a big work, a series of photographs that would take a lifetime to execute and collate. To understand the power and enormity of the Asian cultures…needs years of commitment to field work, to my visual anthropology”.

While Pam has focused his camera on Asia, Melbourne photographer Micky Allan has stayed close to home. Allan began experimenting with photography in the mid-seventies when she was part of a feminist art collective aligned with Melbourne’s Pram Factory, an alternate art and theatre space.

Allan is of the era when women were beginning to gain voice in art photography in Australia. Having originally trained as a painter, Allan is best known for her work that incorporates painting and drawing on photographs and she is regarded as one of the pioneers of mixed media in this country.

Her work on show in this exhibition, titled “My Trip,” was shot over a 17-day road trip through country Victoria in 1975 from which she made her own newspaper publication. But Allan’s “My Trip” is far more complex than the simple recording of a road journey as she explains.

“I had just finished a large body of work in the darkroom at home and I really needed to go on a holiday,” says Allan who is now 70. “I got this idea to just take off in my car and I thought, why don’t I take a photograph of everyone I meet and they can take a photograph of me? This seemed like an interesting idea. I got in the car and I realised I didn’t have any matches for my first campfire. There was a shop on the road and I thought, oh gosh if I get out of the car and talk to someone I’m going to have to start doing it, start taking pictures. But I did and it was good and I kept going.

The majority of people Allan came across were happy to be photographed with only one declining her invitation. “I think in some ways if I had been a male, people would have been more distrustful, but they didn’t see any danger in what I was doing. People didn’t assume I was going to do something invasive”

As for travelling alone, Allan says she never feared for her safety, even when camping alone, although she remembers one incident when a group of young boys began to harass her at a campsite. “I thought, oh gosh what do I do? But then I told them what I was doing, and they became interested and got involved”.

A project like “My Trip” would be far more difficult now as most are familiar with photography, and a woman travelling on her own is no longer a curiosity, facts Allan is patently aware of. “My Trip very much reveals the attitudes of the time towards photography, towards a woman alone and the incidentals of the kind of travel we all often take”.

Best known for his idiosyncratic sequence imagery, Jon Rhodes trained in photography, but spent the first years of his career as a documentary cinematographer for Film Australia working on projects in Papua New Guinea, India and also at home. In 1977 he turned his focus back to still photography and began to document remote indigenous communities in Australia’s interior, and his works in this exhibition reflect that narrative.

Drawn to themes of both indigenous and non-indigenous relationships to the land, Rhodes has spent many years invested in the exploration of Aboriginal culture using sequential photography to evoke the sense of movement to portray change and the passing of time.

But Rhodes’ oeuvre also features intimate portraits and over the past 30 years he has spent considerable periods of time living with the communities he has photographed in some of the most remote locations in Australia. One of his most well known series is ‘Whichaway?’ which traversed the country from 1998 to 2002 and was crafted in 1990 when he was living with a group of Pintupi at Kiwirrkura in Western Australia. The author of numerous books and exhibitions, Rhodes was also the recipient of the prestigious H. C. Coombs Creative Arts Fellowship in 2006, which allowed him to undertake research of the 30 Aboriginal sites that feature in his body of work “Cage of Ghosts”.