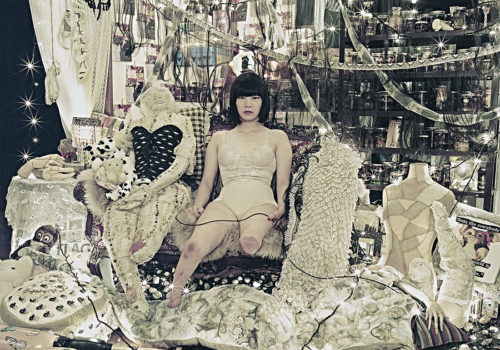 By making her physical handicap a field of artistic experimentation, the Japanese artist shows that sublimation is possible. An exhibition is dedicated to her in the “Studio” of the European House of Photography in Paris.

For some time now, her quiet doll face has intrigued collectors and cultural institutions, to the point that her work had some success during Paris Photo 2019 and that the Antoine de Galbert Foundation recently published a book with some of her images. It must be said that Mari Katayama has succeeded in overturning all the usual representation that we can have of physical infirmity by making it the cornerstone of her creative gesture, as a possible bulwark against the pain of seeing ourselves different from other people and to experience a handicap that makes your body a completely separate envelope.

Suffering from a rare genetic condition, Mari Katayama decided at the age of nine to have both legs removed so that she could use prostheses rather than using a wheelchair.

The artist thus uses her amputated limbs and her hand in the shape of a crab claw to pose in carefully composed self-portraits. On some, she wears her clothing creations which amplify, magnify and reveal the particularity of her stature, she who was initiated very young to sewing by one of her grandmothers and makes amazing costumes, like the one inspired by the tentacles of an octopus – highly symbolic marine animal in Japan. On others, she seems to voluntarily adopt a suggestive pose, with even a touch of eroticism sometimes and which we do not know if it is serious or endowed with a certain irony, but which certainly says how much this young woman born in 1987 aspires to be desired like anyone else.

At the MEP, there are also more recent photographs exhibited on one white wall, which she called In the water. These large unframed prints with photographic paper falling like waterfalls are close-up views of the artist’s legs and arms, covered in golden glitter, like dreamlike and fascinating landscapes that can arouse some form of reverie.