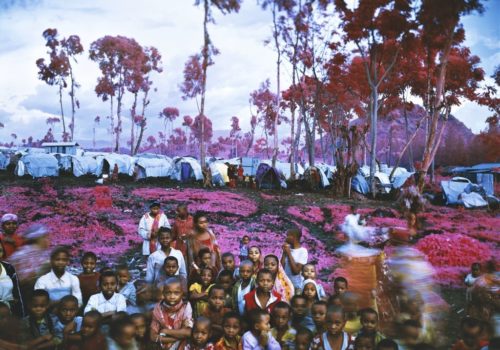 Displaced, the first anthological exhibition by Richard Mosse is on show at MAST, in Bologna. Almost eighty large-format photographs and two immersive video installations, The Enclave and Incoming plus a large 16-channel video wall Grid (Moria) and the video Quick are featured in order to subvert conventions, going beyond conventional representation.

So greens turn into amazing pinks, and b&w landscapes’ sharpened contrast conceals and unveils realities and people at once. Curated by Urs Stahel, the exhibition narrates Migration, Conflict and Climate Change by juxtaposing contemporary art and documentary photography.

Richard Mosse is “aware of the inherent power of the image, but as a rule, he renounces shooting the classic iconic images related to an event. His photographs do not show the conflict, the battle, the crossing of the border, in other words, the climax, but the world that follows the birth and the catastrophe”, Urs Stahel says.

Mosse’s earliest works, with almost no human presence, in Bosnia, Kosovo, the Gaza Strip and at the border, deal with destruction and defeat. His series Infra and The Enclave (a complex six-part video installation, 2010-2015) were taken in the North Kivu region, in the Democratic Republic of Congo – where coltan is extracted – marked by ongoing wars. He used a Kodak Aerochrome, a discontinued infrared-sensitive military reconnaissance film developed to locate camouflaged subjects. As the film records chlorophyll in vegetation, the Congolese rainforest being turned into a surreal pink and red landscape, the contrast between nature and the violence of soldiers and rebels is emphasized.

Then Mosse focused on mass migration and borders (2014-2018) travelling to several refugee camps, like the Skaramagas ones in Greece, Tel Sarhoun and Arsal in Lebanon, the Nizip I and Nizip II camps in Turkey. For Heat Maps and the video installation Incoming (an unconventional look at the migration crisis, created in collaboration with Dop Trevor Tweeten and the composer Ben Frost), Mosse used a thermal imaging camera, that records the so-called ‘heat maps’ instead of capturing light reflections. Images were shot and created reading heat signatures of people who were unaware they’re being caught on camera and, as Mosse recalls, their blood circulation as well as their breath are visible, but not their gazes, “in a two-step process: dehumanising them and then making them human again”

Thanks to the expressive methodology adopted, by displacing the real through an unfamiliar and alienating technology, the Irish photographer offers the viewer new ways to understand problems and tragedies of our time.

Ultra and Tristes Tropiques (2018 and 2019) are focused on the macro and the micro and shot in the South American rainforest, where his research shifts to images of nature. In Ultra, by using UV fluorescence, lichens, orchids and carnivorous plants, the colour spectrum is altered, with fluorescent and glittering colours, to underlining the risk of losing this biodiversity because of climate change and human intervention.

Tristes Tropiques, his most recent series, deals with the destruction of the ecosystem. In the Pantanal, the frontline of mass deforestation in the Brazilian Amazon, environmental damage is shown thanks to the satellite technology and to what Mosse and cartographer Denis Woods call “counter-mapping”, with multi-spectral orthographic photographs.

The catalogue, with essays by the curator Urs Stahel, Michael J. Kavanagh, Christian Viveros-Fauné and Ivo Quaranta, is published by Fondazione MAST.