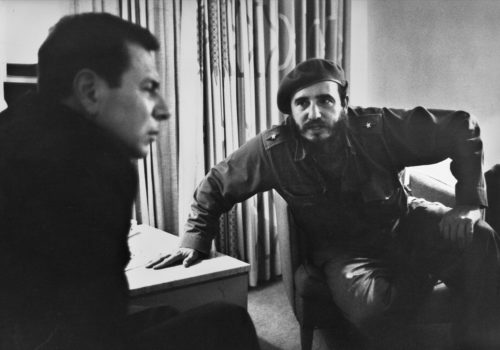 This is the story of s scoop,  that could not  happen anymore. In November 1963, Marc Riboud joined Jean Daniel in Havana and, while waiting for an interview with Fidel Castro, the two wandered around the island until, one day, Castro finally showed up at their hotel … and stayed until 2 am, answering all their questions and making long passionate speeches. It needs to be said that Jean Daniel had just been received in Washington by John Kennedy, who had asked him to pass a message to Castro.

The epic interview came to an end, and Marc Riboud left the following day for France. On that same day, Jean Daniel was having lunch with Castro just as the phone rang to announce the assassination of JFK in Dallas. Jean Daniel gathered Castro’s first reactions, and his article, “Cuba à l’heure du crime” [Cuba on the day of the assassination], published in L’Express alongside Marc Riboud’s photographs, made the front pages of newspapers around the world. Shortly thereafter, Jean Daniel founded Le Nouvel Observateur, where he naturally became one of the dominant voices of the non-communist left, remarkable for his ethics and his wisdom.

The photographs taken by Marc Riboud during that trip are being shown in Paris for the first time, at the Brownstone Foundation. The vintage and modern prints tell the story of a hopeful, revolutionary Cuba, four years after the overthrow of Batista. Slogans painted on the city walls send a message of peace; portraits of Mao or Lenin are shown next to those of the Máximo Líder; but above all, it’s the beauty of women, the freedom of gestures, the lights of the harbor, the headlights of slick Cadillacs piercing the night, that transport us to an era now tempered by nostalgia.

The book Cuba (in French) is published by Editions de la Martinière with texts by Jean Daniel and Marc Riboud, and a foreword by Wim Wenders.
96 pp, €18

Marc Riboud in China, in the eye of his assistant