Marc Riboud in China, in the eye of his assistant 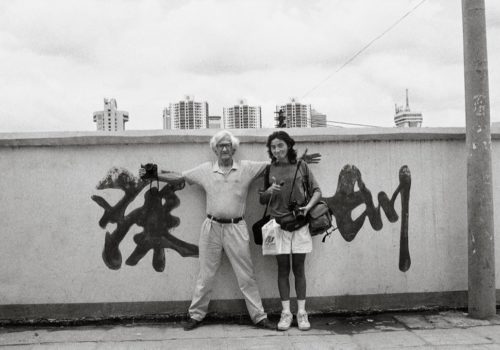 Marc Riboud loved China,  world traveler as he was, China is the only country he  visited from 1957 to 2010 twenty-two times, during a career that spans more than half a century. Marc Riboud said that he liked the Chinese people, and indeed has forged lasting and strong bonds with several photographers, although few Chinese photographers speak a foreign language, and although Marc has never learned Chinese. One day in 1993 in Canton a cultural attaché of the French Embassy introduced Xiao Quan to Marc who was looking for a Chinese photographer speaking English to be his assistant. From that time on, while guiding Marc through the chaotic traffic of Guangzhou, Shenzhen or Shanghai Xiao Quan has continually focused his lens on the Magnum photographer who came pursuing China’s economic miracle initiated under Deng Xiaoping.

It makes Xiao Quan’s testimony all the more remarkable, the exhibition at the Shanghai K11 Art Museum accompanied by a catalog is an exciting opportunity to see again Mark Riboud’s silhouette in China.

Indeed one can see a Marc Riboud alert and fit at 70, playing with kids in a black leather jacket pointing toy-guns at him in an alley of Shanghai, joking with newspaper vendors in the street of Shenzhen with mostly pinups posters highly popular in the 1990s, we see a Marc Riboud intensely concentrated at the sight of this moving and changing humanity. A Marc Riboud raising his right elbow to take a low angle shot looking like a giant Cyclops. We see him totally relaxed in  a restaurant and at rest in his hotel room, seized on the fly in front of his mirror while absorbed in his shaving … Xiao Quan also captured Marc with Zhang Yimou’s favorite actress, Gong Li, adjusting his viewfinder during the shooting of a scene from the film “Shanghai Triad”. All these moments they shared together during the 1993-1996 trips that gave birth to this unimaginable intimacy.

Marc himself especially appreciated his portraits made by Xiao Quan, on the move, in natural. In Mark’s many books, his official portrait that appears on the cover sleeve is very often a picture by Xiao Quan.

In the relationship between Xiao Quan and Marc Riboud we could find the parallel with this generosity in transmitting knowledge that Marc has benefitted from Henri Cartier-Bresson, from the tips only known to experienced traveling-photojournalists, to the way of arranging camera lenses in their photo bags, including the art of communication with the people one wants to photograph. When Xiao Quan told me the advice given by Marc Riboud to improve his English: “nothing like an English speaking girlfriend!” I could not help but remember what Robert Capa told Marc in 1954: to go to England to learn English and conquer the English girls. Capa’s death in Vietnam that same year has long been Marc’s deepest sorrow, because if HCB was like a father to him, Capa was a real brother.

It was in India in 1956 that Marc got a close shot at Chinese premier Zhou Enlai who came with the Dalai Lama and the Panchen Lama for the celebration of Buddha’s birthday, at the invitation of Indian Prime Minister Nehru. Marc therefore obtained a visa for China, where he arrived on January 1, 1957, just for the launch of the Hundred Flowers Campaign. Years later Marc kept his pride in telling his stunt: “my two elder brothers were captains of industry. They used to tell their friends that I was up to no-good. One day I Surprised them saying, well last week I had dinner with Chairman Mao! They did not believe me until I showed them my pictures of Mao! ”

When Marc came back to China in 1965, on the eve of the Cultural Revolution, and shot his iconic “The Windows of Liulichang Antiques Store” Xiao Quan was only 6 years old. When Marc Riboud came back a third time, in 1971, he immortalized Zhou Enlai’s two raised fingers, Xiao Quan had not yet finished high school. From 1980 Marc Riboud would come to China almost every year, to document the country’s high-speed development, at that time Xiao Quan was serving in the Navy between Beijing and Qingdao. While Marc was walking around with his Leica cameras around his neck, Xiao Quan had bought his first camera a Seagull 205, for 180 Yuan, he was 20 years old.

In his second book on China published by Arthaud editions in 1980 “China Travel Snapshots,” Mark writes in his foreword: “I’m a photographer, I am not a sinologist. In China I walked a lot, watched a lot, photographed a lot. I also drank a lot of tea listening to lengthy presentations always conform to the official line of the day. (…) Everywhere I have seen, and I have enjoyed, the beauty of the faces, the patina of the tools, the vastness and strangeness of the landscape and everywhere there is a certain dignity that has replaced, for most people,  humiliation.”

It was Marc Riboud who had the idea to create a photography festival in 2001 in Pingyao, “like Arles” he said. Through his kindness and sense of humor he has attracted the sympathy of a large number of Chinese photographers. In 2010, at the opening of his retrospective in the Shanghai Art Museum, during Marc’s opening speech, there was such a big crowd that the pushing and shoving almost turned into a stampede. During the whole week in Shanghai. Marc and Xiao Quan found their old friendship again, during their photographic outings in the streets of Shanghai, on the rooftop of the Broadway Mansion or in the Yu Garden in search of his “little white rabbit”. At the French Pavilion still under construction on the site of the World Expo, Xiao Quan and I we shared our emotion at the sight of the old master who tried to capture the construction workers, with trembling hands , his nose dripping by a temperature of minus 2° in March 2010.

Xiao Quan’s exhibition in Shanghai in July 2016 was the best opportunity to pay tribute to our “teacher”, who taught us to “see”.

Marc’s way is one of its kind. Often with a single camera, he would take his time like a cat, quietly observing the surroundings and then suddenly accelerating his pace for a few seconds or minutes. Attentive and relaxed at the same time, he would let the picture come to him and when he saw it, he would improvise a little dance around his “subject” to capture it at the best angle. I understand that Xiao Quan enjoyed following Marc and watching him taking pictures, it is a bit like following a dancer because Marc’s approach, light and whimsical, had the same elegance as his photos.

Preface for the opening of Xiao Quan exhibition at Shanghai K11 Art Museum from 14 July to 31 August 2016, with 138 prints, portraits of Marc Riboud by Xiao Quan from 1993 to 2013, taken in Guangzhou, Shenzhen, Beijing, Shanghai and Paris 20 years of portraits.