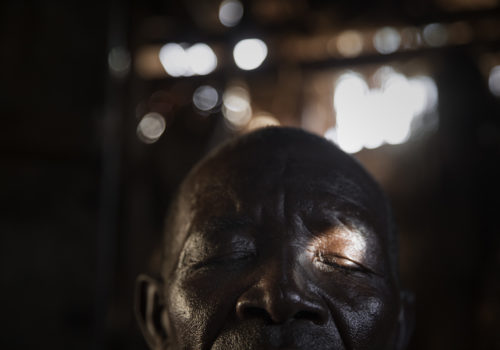 Until February 21 at Mains d’Oeuvres, photographer Adrienne Surprenant presents a reportage on trauma in the Central African Republic. The exhibition was curated by Mathias Benguigui.

Since the Seleka rebel coalition ousted François Bozizé from power in 2013, the Central African Republic (CAR) has been torn apart by conflict with economic, political and social roots, which has sparked ethnic and religious violence. In 2020, before the elections, the country’s main rebel groups joined forces to destabilize the incumbent president by forming the Coalition of Patriots for Change. Clashes took place in several towns across the country, once again causing people to flee.

In 2017, during her first reportage in the country, photojournalist Adrienne Surprenant was told of nightmares and insomnia. These testimonies revealed a harsh reality: sleep disturbances are one of the main symptoms of traumatic memories which, in the Central African Republic, are linked to the conflict.

In CAR, the majority of the population has witnessed or participated in an act of violence, ranging from rape to murder. Some have taken up arms after seeing their loved ones die. Others, because their daily bread was threatened. When meeting these deeply wounded people, a question arises: what are the possibilities of reconstruction for a society in which trauma is the norm? How to live with all those psychiatric disorders resulting from a traumatic event leading to behavioral changes: insomnia, hypervigilance, irritability, total or partial amnesia, violent behavior, dissociative behaviors, flashbacks of the event, anxiety, psychological distress and nightmares?

This is how, like Dr. Kette, the only psychiatrist in the country, Adrienne Surprenant began to ask: “ How do you sleep at night? This question allowed her to address personal trajectories and psychological wounds without risking provoking a second trauma to the interviewee, leaving him/her the choice to give details, or to express reality through the metaphors of their dreams.

From 2017 to 2021, the photographer returned to the Central African Republic, and was able to interview people suffering from post-traumatic stress disorder from different backgrounds, from warlords in prison to survivors of sexual violence.

From the fiction of dreams, but rooted in the reality that inspires them, this reportage tells the story of a country struggling with the omniscient presence of violence and its impacts on mental health.

Born in 1992, Adrienne Surprenant is a Canadian photographer based in France. She joined the MYOP agency in 2022 and is a member of Women Photograph. After studying photography at Dawson College, she affirmed her documentary style by tackling long-term subjects, in Nicaragua (2014-2015), then between Cameroon and the Central African Republic (2015 to 2021).

Her favorite themes are located on the border between the visible and the invisible, hoping to give back to the situations she addresses the complexity that can allow us to confront them in an honest and empathetic way. Identity, mental health, human rights and the environment intertwine in her projects, which reflect the harsh reality of the world. Photography is an uncompromising social commitment.