Lucien Hervé : Geometries under the light 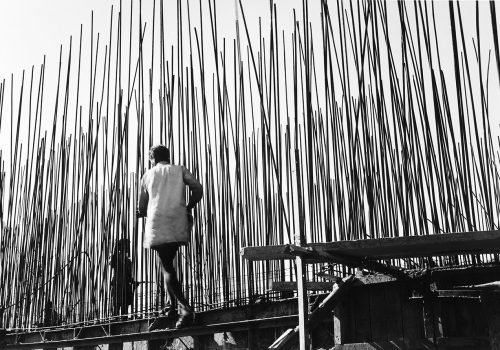 The Centre des monuments nationaux and the Jeu de Paume present “Lucien Hervé. Geometries under the light » an exhibition of the work of photographer Lucien Hervé (1910-2007) devoted to a selection of his architectural shots, at Villa Savoye from November 21, 2019 to February 23, 2020.

Celebrating the 70th anniversary of the meeting between Le Corbusier and Lucien Hervé, the exhibition aims to renew the artistic dialogue initiated by the two creators around the “scholarly, correct and beautiful game of forms assembled in the light”.

The exhibition of Lucien Hervé’s photographs at the Villa Savoye, a monument designed by Le Corbusier in 1931, marks the 70th anniversary of the meeting between the two creators, collaborators and friends. Although this meeting was decisive for the 39-year-old photographer, it also represented a beginning for the already established architect: that of a new dialogue between his architectural work and his representation.

“You have the soul of an architect and you know how to see architecture,” writes Le Corbusier in his first letter to Lucien Hervé, “come to see me! “.

The first discussion between the two men was devoted to the visual arts, and especially to painting, rather than architecture or photography. This first shared passion expresses in a fundamental way their vision of art. Le Corbusier had created a total work expressing himself in many fields. The beginnings of Hervé as a painter testify of his adherence to this global view. Their dialogue deepened over the years around shared visions, above all on the man and his place in the society of the time. In his youth, Lucien Hervé was engaged in syndicalism, the communist party and the resistance. An established artist, he joined the social vision of Le Corbusier.

Lucien Hervé’s exhibition at Villa Savoye offers the public a special opportunity to have the work of the two artists dialogue again. The limited choice of photographs by Lucien Hervé seeks to resonate with the space of the villa, its geometry, its rhythms, its volumes, its delicate equilibrium, its materials. “Knowing how to see architecture”, as Le Corbusier put it, represented for the photographer the fact of contemplating it, of investing its spaces, of touching its walls and of observing its interaction with the changing light – before daring transform it. For if the constructions of Le Corbusier can be apprehended as sculptures, Lucien Hervé’s photographs become works of plastic art tending towards abstraction. A series of photographs interpreting this architectural vision marks the visit.

“Light and shade are the speakers of this architecture …” – said Le Corbusier about Hervé’s views on the Thoronet Abbey, a monument also managed by the Center des monuments nationaux. This observation, which is so true, applies to this particular building, but more broadly synthesizes the principal elements of construction specific to the photographer. Alongside the abbey, a series of other sites, such as the vernacular houses of the Mediterranean or the ancient monuments of India, weave a link between the two artists, as discoveries and shared sources of inspiration.

Lucien Hervé’s modes of attachment have always reflected his conviction that the goal of a work of art is not to decorate. He has never considered his photographs as works proper, but rather as images intended to captivate and move. From his first exhibitions, he sought to make opportunities for exchanges, surprises, questions. The Villa Savoye, itself full of surprises, so “untouchable” in its current state, is a real challenge  the hanging of the images of the photographer was the subject of a scenographic project conducted with students of the National School of Decorative Arts. The semi-open spaces of the villa, the continual interplay between the interior and the exterior, is prolonged in the photographs of Lucien Hervé who, with the help of light, transforms walls, surfaces, materials such as stone or concrete.