Lucien Chauffard, beautiful light in the shadow of Robert Doisneau 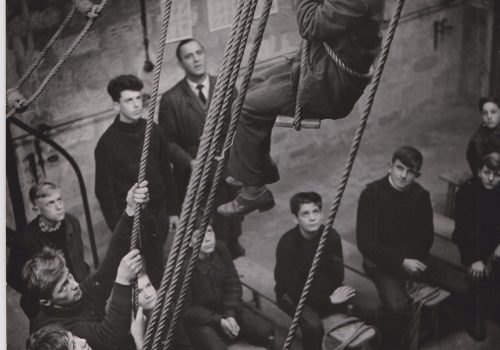 Last Friday, there was this email:

“Hello, I once had the opportunity to meet Lucien Chauffard and I noticed that there was little trace of his photos or his importance in the life and work of Robert Doisneau. I’m trying to fix that. There has just been an exhibition in my village where I tried to trace its importance.”

Of course, you answer immediately.

And absolute happiness, this happened.

If I say to you: Robert Doisneau, your eye will immediately light up and the images will follow one another, but if I mention Lucien Chauffard … and yet it was the same opinion of the girls of Robert Doisneau, a red thread in their father’s career.

To introduce you Lucien, I have to make a little jump in the past.

When, at the beginning of the 80’s, I arrived at the pink villa, near Chalon sur Saone, at the edge of the saone, Lucien was introduced to me; the great uncle of my future husband had been, I was told, a great photographer, he had worked with Robert Doisneau, had been employed by Louis Renault, knew Hélène Boucher, had cotèrent the universe of advertising I was shown his drawings, his paintings and especially his photographs.

I immediately felt a great tenderness for this old gentleman whose memory had gone astray but who, reflex photographer, marveled at a sunbeam murmuring: beautiful light.

Lost in memories of his past life, he classified, annotated and sometimes tore up the few clichés that his brother André left at his disposal.

One day Lucien went to photograph the stars and reorganize the advertising department of Heaven.

The days passed, the weeks, the months, the years, the paths of life led me away from Saint Remy. Then one day my daughter Anne Sophie asked me to draw a portrait of this great great uncle she had not known but whose memory always hovered over the family.

It was then: a descent into boxes of memories, searches in memories, on the Web.

I tracked Lucien since his birth in 1906 in Oyonnax. I saw the family circle grow with the birth of his brother André in 1908.

I followed in his footsteps when the family returned to Chalon sur Saone after the Great War. Lucien, a talented teenager for drawing, then shows the talents of a draftsman who make his master tell him who gives him a drawing: you will tell your dad that I gave him a A+!

It was in 1919 that he won the Chalon carnival poster contest, which was repeated for the 50th anniversary and in 1971.

Follows his apprenticeship as a lithographer at the Courrier de Saone et Loire. But Lucien has an idea in mind, he wants to do Fine Arts in Paris. Jeanne, her mother, does not hear it that way and it will be necessary that Augustuste his father proposes to send Lucien to live with the aunt of Franconville so that Jeanne gives in, but on one condition: she will not finance the studies of this rebellious son.

I found Lucien in Paris, a student at the Beaux Arts, but in architecture because of lack of space. The young man gets up very early and to pay for his studies unloads trucks in the halls.

Then Lucien began to create and there were many pen drawings to illustrate posters for resorts, advertisements.

In 1927 during his military service in Nancy he drew the poster of the aviation meeting.

It was at Ullmann’s house that Lucien first met the young Robert Doisneau hired as a draftsman. At this time Lucien is doing photography and Robert is very interested. Lucien teaches him the technique and when he leaves the company, Doisneau finishes the catalog started by his mentor.

Lucien left the Ullmann studio and as he wrote to his friend Robert, he met a wonderful character: André Vigneau. André Vigneau is then artistic director of the printing press Lercam-Press and he mounted one of the first well-equipped studios of Paris, he is at the same time painter, photographer, sculptor and even musician! He is also the husband of Renée Albisser who will become much later and until his death, the companion of Lucien.

In 1931 Lucien will introduce Robert to Vigneau who is looking for an operator.

Lucien continues to draw posters, such as that of the city of Vichy which was taken over by the city in 2017 as a greeting card.

It was at this time in 1933 that he made for the launch of the Celta Four, a poster noticed by Louis Renault.

Lucien is offered an offer to enter the Renault factories at half-time and fix his price. Surprised by the demands of Lucien, Mr. Renault hesitates first then hiring and a few months later asks him to be his full-time collaborator!

Lucien sets up the photo service and in August 1934 will hire his friend Robert who has just married.

It is at Renault that Lucien will meet the biggest names in the automotive and aviation industries such as Héléne Boucher, Madeleine Charnaux and Maurice Arnoux.

But for Lucien, Renault is a golden cage and in 1937 he resigns.

It was at this time that he created his own studio near the Yvry gate and worked with Ergy Landau, creator with Rapho’s Charles Rapho. Lucien introduced Robert to Ergy Landau.

I also found collaborations between Lucien and Robert like for example a booklet protector Simca advertising.

Lucien worked for Simca: it was he who drew the Hirondelle logo of 1938,

After Renault, follows a career of freelance photographer and publicist, working for example for the Navy with a meeting Eric Tabarly (this one ravished with photos taken by Lucien sends him a letter piously kept by the family!), for renowned fisheries, for a restaurant in the Place Vendôme, for the magazine Femme and for many others.

On the death of Renée, his companion, Lucien diminished will be supported by his brother and will find the Saone et Loire.

It rests in the small cemetery of Saint Remy and very few remember the photographer and publicist who turned a lot of heads in the 30s.

Lucien who had been too long excluded from his own family by his mother for his bohemian way of life to the taste of Jeanne Chauffard, became through my research vector of family and friendly links.

Thanks to Lucien I made wonderful encounters especially with the girls of Robert Doisneau who confirmed me the primordial role played by Lucien in the career of their father and searched all their archives to find precious documents and even a photo of Lucien taken by their father.

I received a lot of moving messages encouraging me to bring back Lucien’s memory and his photos.

Thanks to Mr. Vincent Gaudy and the municipality of Florensac, my village of adoption for 10 years, who gave me a very beautiful poster campaign highlighting one of Lucien’s clichés, Mrs. Chantal Flament, director of the media library that supported me and opened the doors of her exhibition space, to Mr Bertand Ducourau director of the museums of Agde and Myklo Garcia artist for their loan of frames, showcasing the works of Lucien, and the support of all the moments of my husband Alain and my friends.