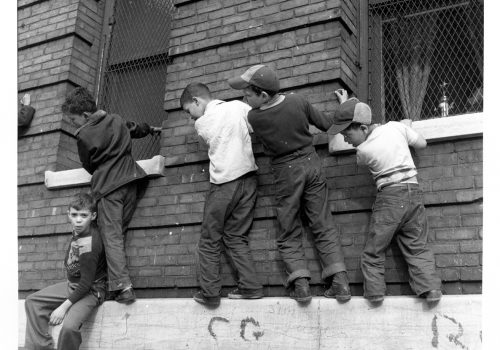 Les Douches La Galerie presents, with the help of Deborah Bell, Sid Kaplan‘s first solo exhibition in France. The exhibition is presented with this text by Magali Jauffret:

Seeing footage of Sid Kaplan is rare. Because this 82-year-old New York photographer, who still runs a studio and darkroom in the East Village, has had his own career overshadowed by the cumbersome legend of Mr. Frank, as he calls the one whose prints he produced, for thirty-five years.

Robert Frank (1924-2019), author, in 1958, of the cult book “The Americans” edited by the French editor Robert Delpire, was therefore the tree that hid the forest. And he might say, “Sid Kaplan is not only an excellent printer, but also a very great photographer not yet recognized enough”. The man had to wait until 2005 for the galleries to take an interest in his life’s work – some 96,000 images – finally offering them exposure and recognition.

You will succumb to the charm and energy of the famous American street. But how ? What guides Sid Kaplan’s gaze when, hanging out in a New York bar, he stumbles upon a smoker towering over three screens? When the snow which has the same effect on him as when he was a kid, he comes out exhilarated to capture the magic of whitewashed cityscapes? For two years, he photographed a crossroads on the corner of Madison Avenue from a window? When for ten years, after the winter and summer solstices, he stares at sunset, between the skyscrapers of Manhattan?

We are far from the strafing of Gary Winogrand who, in addition to women, frames, as much as he can, the energy, the flow, the urban bazaar. Far from Lee Friedlander who, influenced by Walker Evans, tries to give life to the social landscape. From Louis Faurer who favors, among anonymous people who often come across at night, fragility and doubt. By Diane Arbus whose portraits reveal the devil hidden in each of us.

Sid Kaplan isn’t shooting on the sly, nor is he looking for the golden ratio. To his gallery owner Deborah Bell, he explains: “For me, the best way to practice photography is to do it in my free time, like Jacques-Henri Lartigue or Alfred Stieglitz. I never wanted to do a job that would put me at the mercy of artistic directors and deadlines, I would have gone nuts. ” To his colleague, the French printer Guillaume Geneste, author of the book “Le tirage à mains nues” published this fall by Éditions lamaindonne, he confirms: “I knew I didn’t want to be in the studio. I just wanted to be alone with my camera and walk around to take my own pictures ”.

Where was this desire for photography born and when? In the South Bronx, where his Jewish family from Eastern Europe, went into exile. Then, coincidence doing things well, he met Weegee when he was 14 years old. It was there that he found himself “hypnotized, drawn like a drug” when he first saw an image taking shape in the revealer.

Eugene Smith became his neighbor. Ralph Gibson introduced him to Robert Frank, “a customer who pays.” In the meantime, the young man, who must earn a living, has taken to working for “Compo”, Manhattan’s most prestigious photographic laboratory. There, he spends his life in the darkroom, but by washing, freezing, drying the prints, his eye, in contact with them, never ceases to form.

Because he rubed shoulders with the cream of the photographers of the time, from the team of the “Family of Man” exhibition which is exported throughout the world, to that of the FARM (Farm Security Administration) to those of the Magnum agency among which Cornell Capa who made him take the pictures of his brother Robert, Lou Bernstein of ICP, Philippe Halsman, the poet Allen Ginsberg …

Many of these photographers were very involved in the Photo League, which the Mac Carthy commission will soon dissolve. Reporters or photojournalists, they have artistic concerns, but also social ones. They want to testify. This is not the case with Sid Kaplan. Raised in the Bronx, he certainly rubbed shoulders with misery, he is certainly imbued with the Jewish culture of Eastern Europe, he hardly leaves the Lower East Side, but does not feel in any way invested with a mission. . Only to pass on his brilliant black and white shooting skills to the School of Visual Arts in New York, where he is a professor.

Lines in space, high lights, traces of a vanished New York, a street scene with kids, a passing cloud … Sid Kaplan the documentary filmmaker humbly enjoys what would have delighted André Kertész. He is no more interested in humans than that. He does not take the lead. And above all, he does not forbid himself. He is not afraid of the eclecticism which, with him, is a force keeping him far, far from the anecdotal.