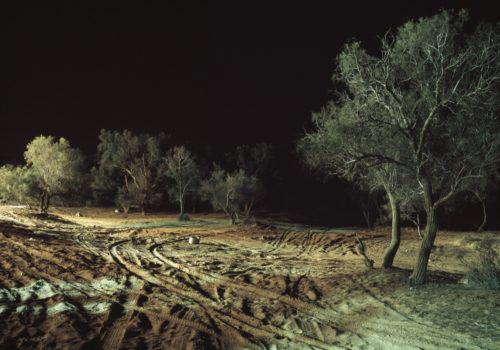 Exploring the grey areas of his native country, the photographer builds a portrait combining no-man’s lands and the inhabitants. The photographs plunge us into the abyss of the territorial and social divide eroding Israel.

Assaf Shoshan reluctantly admits to the joy he finds in his nighttime prowls. “There is so much pleasure in getting into your car and turning the key in the ignition just as the night is falling,” he recounts, “and then you take off to explore unknown territories, you embark on an adventure.” He acknowledges there is also a frisson of danger. At night, one can’t be sure what’s coming, what can happen. One must sneak around and, all ears, slink between the trees and the rocks.

His prowls began some fifteen years ago. The day he came back to visit his country after having settled in Paris, the Israeli artist was suddenly overcome with the desire to see the underside of the familiar décor. As an adolescent, he had been accustomed to living by day—waking up early and going to bed early; now, he wanted to explore by night this region tucked into a corner of the country, next to the Negev Desert, where he had moved with his parents as a child from Jerusalem where he was born in 1973.

And so, a wanderer and a dreamer, the photographer captures whatever catches his eye. Like a nocturnal insect, he finds himself drawn to the light. Oftentimes, these are lights emitted by installations symptomatic of the country’s geopolitical situation: military camps, roadblocks, checkpoints. A spectral neon glow blends with the moonlight. The photographer uncovers a nocturnal aesthetic and seizes it with confidence. He firmly plants his camera to allow for long exposures in order to bring out extraordinary textures of light. “I often keep my shutter open as long as thirty minutes. Not too long ago, I went a whole hour,” he explains. In that time emerge high-contrast tableaus in which artificial light wages a battle against total darkness, and the desert of a no-man’s land opens onto a luminous stage.

Sometimes the photographer is harassed by the police. When he takes a picture of a military camp, they swoop in on him, demand to see his I.D., ask what he’s doing there, at this time of the night, with his camera. “I photograph landscapes,” he explains evasively. But he doesn’t photograph just any old landscapes: he is interested in those that separate the people from their State; those that declare, simply by being there, that some inhabitants are not welcome to take part in the political life where their future is being decided; he is interested in territories scarred by political and social conflicts and marred by governmental decisions.

Dwellers of the night

And so it happens that, next to nocturnal landscapes, Assaf Shoshan exhibits portraits of night dwellers. They are friends to the photographer, people whom he meets on his night prowls, marginal people who have something to say about the territorial and social rift dividing the country. There is Adi who sits in his truck waiting for a friend. Usually, he spends his night drinking alone. His kid brother is about to enlist in the Israeli Army. Then there is David Osher who gets off his shift at the factory at dusk. He has worked there for thirty-five years and will soon leave it behind. There is also a couple, Orly and Konda. Orly is worried to death because Konda is constantly being threatened with eviction. And then there is Lishay. Lishay holds in her arms a sick eagle given to her by a Palestinian who had found it in his camp. The bird of prey may have been infected with avian flu. Lishay is facing a terrible moral dilemma: should she kill the bird, or let it live and risk spreading the disease? It is a Kantian dilemma which brings to mind the quandaries of political decision-makers, and which finds meaning in the photographer’s oeuvre created against the backdrop of the Israeli-Palestinian conflict and all the political and social conflicts that have festered in this land for nearly a century.

“It’s not so much a specific event as the succession of conflicts happening since I was a child that shocked me and continues to shock me,” explains Assaf Shoshan. There is a segment of the population who are invisible because they have been confined to living at night, in poor, deserted areas, and whom the photographer wants to bring to light; also in the literal sense, since by making these portraits he puts them in the spotlight. He thus illuminates the characters he had chosen because of their history, and over long exposures captures their authentic expression which, in turn, he claims, tells the story of who they are. “These people have a hard time talking about themselves, and perhaps photography is the best way of going about it,” reflects Assaf Shoshan. In the exhibition, he added captions only for them—but not for the landscapes. As titles of his portraits he used the first names of the portrayed subjects. He thus created a meeting point between us, the visitors, and the person who is over there: in the night, in the desert, in Israel. We grasp straight away the intimate relationship between the photographer and those people, and we feel summoned to look at them in friendship.

While in his photographs and his mises-en-scènes, Assaf Shoshan holds at a standstill situations in motion, he films what is motionless: the social divide and the human condition. At the lower level of the La Frontiera Gallery, the artist presents three videos that have a clear connection to his work in photography. Filmed performances, the videos reflect on the notion of a people, of togetherness, and of the difficulty, if not the impossibility, of going up against the wall of no-man’s lands and lawless zones. One of the videos shows a pedestrian crossing in a city. Passersby cross as soon as cars stop at the traffic light. But other pedestrians keep to the side; they are waiting, but never cross. They are Jewish-Ethiopian immigrants, who find it difficult to integrate into Israeli society, who are sometimes excluded or stigmatized by the rest of the community. By depicting them as denied simple passage across the street, Assaf Shoshan stirs up the viewer’s sense of indignation through a reduction to the absurd. Why those and not others? What keeps them from coming towards us, from crossing the road to where the artist has installed his camera? Why they are unable to perform such a simple, everyday gesture? To take a few short steps?

Another video, in turn, tells us something about the human condition. Inspired by the myth of Sisyphus, Assaf Shoshan filmed a man running, but who seems strangely immobile. Shoshan films him from a low angle, thereby concealing a treadmill used in the set-up. The runner is frozen in place in the middle of a desert, but there is nevertheless something that is changing around him: the light. The runner moves from day to night and from night to day. While he is not making any progress, at least he has the choice of light. He can decide whether he wants to be in the light or not. Whether he wants to run on the shady side or on the sunny side. And thus he can, perhaps, shed light on his condition. Victor Hugo’s famous words come to mind: “The man who meditates not, lives in blindness; the man who meditates, lives in darkness. The choice between darkness and darkness, — that is all we have.”