Jim Grover : Behind the Shop Facade – The Life of Maurice Dorfman 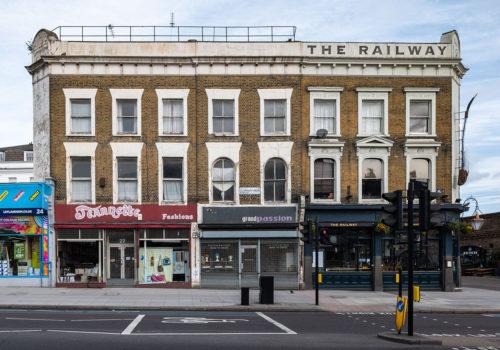 Behind the Shop Facade – The Life of Maurice Dorfman is a whirlwind visual journey through nine decades of a remarkable man with a remarkable story – an unsung hero posthumously celebrated by award winning social-documentary photographer Jim Grover with an exhibition and accompanying book. For the past 18 months, Grover has immersed himself in extensively researching the vivid history of Maurice (or ‘Murray’) Dorfman, a man who to many was the amenable solitary owner of Jeannette Fashions, the longest surviving traditional shop on Clapham High Street, but whose vivid life left an incredible legacy as Grover’s exhibition and book pay testament to.

Dorfman’s is a life of many lives. One that preludes with a Jewish family fleeing the pogroms in Russia at the end of the 19th century and arriving in London’s East End in 1902. Dorfman rests at its centre, the last of one of the six strands of the family tree, and whose journey we travel alongside. Featuring a childhood in Essex during WWII, and the rigours of National Service this is a journey that, early in his life, brought Dorfman to South London at the beginning of the 1950s, and where for almost 40 years he ran Jeannette Fashions, his traditional haberdashery shop on Clapham High Street, following in the tailoring footsteps of his Jewish grandfather and both his Jewish parents. Behind the facade, here was a shopkeeper from a bygone era dedicated to serving his customers in his own distinctive and endearing way.

“He danced around the shop with me… playing his music. And he’d even cycle around the shop… He was a very playful character. His shop was like a theatre space and so you felt like you could go in and you could do anything there.” Quote from Behind the Shop Facade – The Life of Maurice Dorfman

His was a long and full life that embraced life’s simple pleasures: dancing; sailing; motorbiking; cycling; music; visits to the theatre and ballet; pets; and camping holidays in the UK with his girlfriends. One too that embraced many challenges: growing up at a time of anti-Semitic feeling; the bankruptcy of his father; the fracturing of his relationship with his only sibling; saving the family business from ﬁnancial ruin; battling cancer (alone) twice; love affairs that ended with disappointment; growing old and living by himself for some 30 years in an enormous and decaying building; and sustaining Jeannette Fashions as it steadily dwindled in its twilight years where it remains for the time being untouched like a time capsule.

“I would say that he would be somebody that would get your attention, but you wouldn’t be aware of that… but, somehow or another, he would. You would feel intrigued in some way. He was a very engaging guy without it being apparent… he was like an understatement. He was also intriguing and he had such a fun side to him… it allowed the mischievous or the creative to come forward. Playful… and a little bit mischievous… that’s always appealing isn’t it?” Quote from Behind the Shop Facade – The Life of Maurice Dorfman

On 18 February 2020, Dorfman passed away at the age of 87. With no direct family to pass the business on to, 60 years of clothing manufacturing and haberdashery trading by the Dorfman family on the high street ceased. It was the end of an era but one that Grover, aided by some very old address books, family photographs, and press clippings combined with the extensive memories, stories and mementos of over 60 customers, friends and work colleagues over the decades, has been determined to celebrate and preserve – an extraordinary social history.

A Clapham resident himself, Grover’s interest in Dorfman stems from 2016 when he befriended him as part of his photo-essay, 48 Hours on Clapham High Street. Featuring images of Dorfman in Jeannette Fashions, Grover quoted his words in the opening of the exhibition and catalogue introduction. Continuing to visit him at the shop, Grover remained, like so many, friendly albeit at a distance from Dorfman. It was the sheer volume of memories and emotions that Dorfman’s passing triggered amongst so many friends and customers from over the decades that inspired Grover to pay one ﬁnal monumental tribute to Dorfman by assembling this exhibition and accompanying book in celebration of his astonishing life and the family business. It is a recognition of Dorfman and his family’s contribution to the community over six decades, and his unassuming kindness to so many of the people within. Behind the Shop Facade – The Life of Maurice Dorfman is a mark of affection for an exceptional man, one who had little idea how respected, admired, and appreciated he was by so many around him.

Dorfman’s journey will be presented as a major exhibition in Clapham, where it belongs. The exhibition features over 50 contemporary photographs by Grover alongside his numerous still life photographs of documents, family pictures and objects relating to the Dorfman story, artfully composed against fabrics from Jeannette Fashions. The exhibition is curated by Susanna Brown, who previously worked at London’s V&A and National Portrait Gallery and recently curated Tim Walker: Wonderful Things at the V&A. A 232-page book and shorter exhibition catalogue are available to purchase from Clapham Library and from the dedicated project website: www.behindtheshopfacade.com

For Grover this has been a unique and unexpected experience delving into the life of someone he respected and admired but initially, like so many others, knew very little about, “For me, he is one of life’s unsung heroes who richly deserves the tribute that so many have helped me create in his honour. Whilst his shop facade and home will inevitably disappear in the wake of the never-ending development of Clapham High Street, Maurice Dorfman will now never be forgotten.”